Victoria has recorded no new local cases of COVID-19 for seven consecutive days as coronavirus restrictions are set to be further eased across the state.

In more good news, there were also no new cases recorded in hotel quarantine on Tuesday in the 24 hours to midnight.

There were 27,498 test results processed in the past 24 hours, and more than 15,784 people received their vaccine doses.

The state government is expected to announce eased restrictions on Wednesday morning, including removing the mandate on masks in offices and increasing capacity at AFL matches and entertainment venues.

But it follows Tuesday’s announcement that the Australian Grand Prix, due to be held in November, was cancelled for the second year in a row.

Victoria’s Tourism and Sports Minister Martin Pakula on Thursday pointed to low COVID-19 vaccination rates, national cabinet’s decision to halve international arrival caps for returning Australians, and Formula One requiring a decision on the event by the end of the week as crucial factors in its cancellation. 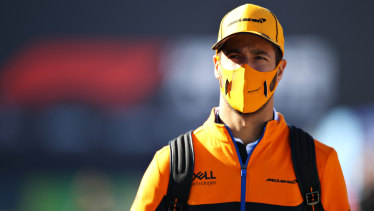 He said if Serena Williams wants to come to the Australian Open next year when she is vaccinated against COVID-19 and tests negative prior to flying and upon her arrival, “she should be able to go about the community like any of us”.

“You might have heard … last week, the [Victorian] Premier went to Canberra, to national cabinet and said, ‘We have got to reduce the number of people coming into this country.’ Yesterday, they used that as an excuse for the cancellation of the grand prix – that we can’t get people into the country. You can’t have your cake and eat it too,” Mr Kennett told ABC News Breakfast.

Coalition Senator Matt Canavan said Victoria’s decision to cancel the grand prix wasn’t due to the country’s troubled vaccine rollout. Instead, he said it was about saving face after the Andrews government argued strongly for the reduction in international arrivals.

Mr Canavan said it wouldn’t be a good look for Victoria to welcome highly-paid, international Formula One drivers and their teams into the state while locking out Australians.

“It is a bit hard to understand how they’re blaming the vaccine rollout when all the drivers and teams would have been vaccinated coming into this country,” he said on the Today show on Wednesday.

“The simple fact is that Victoria, along with other states, has decided not to take international arrivals, or halved them last week. It is a bit hard for them obviously making a decision to stop Australians coming into the country to then say they would give the green light for F1 drivers and teams to come into the country.

“I think it’s really unfortunate the state governments haven’t been able to manage their quarantine systems better. We should be taking more Australians back.

“Instead we’re crawling back underneath the doona.”

Australian Formula One driver Daniel Ricciardo said on social media that hopefully the event can still happen in 2022.

“It hurts, I know. We were all looking forward to it and particularly myself to race in Melbourne again,” he said. “We got to keep our chin up, look forward. I’m sure by [2022] it will be bigger, better and more beautiful than ever.”