Omar Abdulaziz hit record on his phone and slipped it into the breast pocket of his jacket, he recalled, taking a seat in a Montreal cafe to wait for two men who said they were carrying a personal message from Saudi Crown Prince Mohammed bin Salman.

When they arrived, Abdulaziz, 27, a Saudi opposition activist, asked why they had come all the way to Canada to see him. 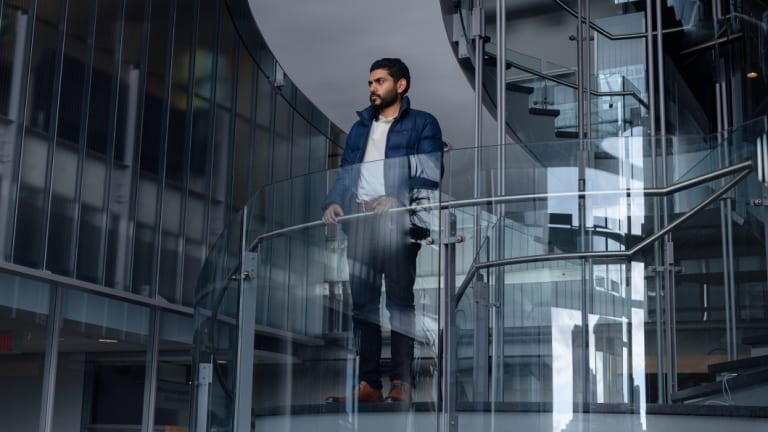 "There are two scenarios," one emissary said, speaking of Abdulaziz in the third person. In the first, he can go back home to Saudi Arabia, to his friends and family. In the second: "Omar goes to prison."

Which will Omar choose, they asked.

To drive home what was at stake, the visitors brought one of Abdulaziz's younger brothers from Saudi Arabia to the meeting. Abdulaziz appealed to his brother to keep calm.

The clandestine recordings – more than 10 hours of conversation – were provided to The Washington Post by Abdulaziz, a close associate of the missing Saudi journalist Jamal Khashoggi. They offer a chilling depiction of how Saudi Arabia tries to lure opposition figures back to the kingdom with promises of money and safety. These efforts have sharply escalated since Mohammed became crown prince last year, rights groups say.

Several of Khashoggi's friends said that senior Saudi officials close to the crown prince had contacted him in recent months, even offering him a high-level job working for the government if he returned to the kingdom. He said he didn't trust the offer, fearing it was a ruse. According to US intelligence intercepts of Saudi officials, Mohammed had ordered an operation to lure Khashoggi back to Saudi Arabia from his home in Virginia and then detain him.

Khashoggi has not been heard from since he visited the Saudi Consulate in Istanbul on October 2. Turkish investigators have concluded he was killed inside the mission and then dismembered. Saudi officials say they have no information about his fate.

Abdulaziz, who has asylum in Canada, said he had been working on several projects with Khashoggi that may have given the Saudi leadership more reason to want him out of the way. Khashoggi had sent him $US5000 for a project they called "the bees" – an initiative to build an online "army" inside Saudi Arabia to challenge pro-government trolls on the internet. The pair were also working on a short film, a website tracking human rights, and a pro-democracy project, Abdulaziz said.

This work was supposed to be secret. But Abdulaziz said he was targeted by Saudi spyware this summer. "They had everything," he said. "They saw the messages between us. They listened to the calls." 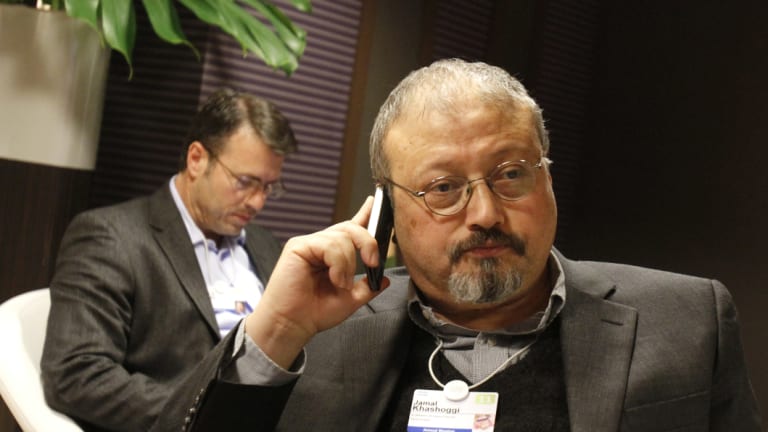 Saudi journalist Jamal Khashoggi was an outspoken critic of the Saudi regime.Credit:AP

In the recording made by Abdulaziz, the two visitors say repeatedly that they had come personally from the crown prince. They also mention that they were working on orders from Saud al-Qahtani, a top strategist and enforcer for Mohammed.

It was Qahtani who, Khashoggi told friends, called him in the months before his disappearance, urging him to end his self-imposed exile and return to Saudi Arabia.

Abdulaziz originally left Saudi Arabia in 2009 to study in Canada, he said. He built a Twitter following during the Arab Spring and then, while at McGill University in Montreal, he started a popular YouTube show known for criticising and satirising the Saudi leadership. He gained permanent residency in Canada in 2014.

Abdulaziz and Khashoggi struck up a friendship after the Saudi journalist moved to Washington in the summer of 2017. "He was lonely when he left," Abdulaziz said. "We started to talk about living abroad away from our families, how is life and the projects we are going to do … Jamal was a father, a friend."

"The bee army" was Abdulaziz's idea, but he said Khashoggi liked it. As he criticized the Saudi leadership as a contributing columnist to the Post, Khashoggi had encountered the pro-government Twitter accounts that Saudi activists refer to as "the flies".

"Jamal was insulted so much by the Saudi bots," Abdulaziz said. "They were focusing on Jamal as he was the voice in the Western media."

Abdulaziz said he suggested an online countermovement. He just needed some cash to get it off the ground. "We call them 'the fly army,'" he said. "We call ourselves 'the bee army'."

The plan, he recounted, was to buy SIM cards with Canadian and American numbers that Saudis inside the kingdom could use. Twitter accounts must be verified with a phone number, and activists in Saudi Arabia are scared of linking their Saudi numbers to their Twitter accounts, fearful they could be traced and arrested for being critical of the government, he said. They'd already allocated 200 SIM cards to people.

Khashoggi had also asked Abdulaziz to help on a short film showing how the Saudi leadership was dividing the country and on a logo design for a foundation he was forming, Democracy for Arab World Now. Abdulaziz was also helping Khashoggi design a website to track human rights issues.

But Khashoggi was particularly apprehensive about the SIM card project. "He told me this project is too dangerous," Abdulaziz said. "He told me to be careful … Twitter is the only platform we have, we don't have a parliament."

In a June 21 message, Khashoggi wrote to Abdulaziz: "I will try to get the money … We should do something. You know sometimes I'm [affected] by their attacks."

Two days later, Abdulaziz placed an order on Amazon. He clicked a link sent to his phone to track a parcel delivery. He suspects that the action infected his phone.

The Citizen Lab, a University of Toronto project that investigates digital espionage against civil society, warned him in August that his phone may have been hacked. Two weeks ago, the group concluded with a "high degree of confidence" that his mobile phone had been targeted, by an operator linked to "Saudi Arabia's government and security services".

Abdulaziz said one of the men had been making overtures to get him back to Saudi Arabia for several months. If the man had a message, he could bring it to Canada, Abdulaziz recalled telling him. He could have a new start in Saudi Arabia, they said. He said he was coming and set up a WhatsApp group called "New Era" on March 30, a screen shot shows.

Khashoggi had counselled Abdulaziz to be sure to meet the men in public places and by no means return to the kingdom with them. "He said, 'If you want to take money, it's your decision,' " Abdulaziz recalled. "'But do not go back; do not trust them.' "

The two Saudi visitors began their pitch to Abdulaziz at the May 15 meeting in Montreal's Juliette et Chocolat cafe as Neil Diamond's Sweet Caroline played in the background.

Khashoggi is a "headache", but he was thinking of returning to Saudi Arabia, one man said. Abdulaziz should, too.

"Omar, to deal with you, we didn't want to come from a minister or an ambassador. We wanted to come from the top of the pyramid, the prince," one man said. "No one can better deal with this subject than the prince himself."

The Post has listened to more than 10 hours of recordings provided by Abdulaziz, which he says were taped during meetings with the men over four days in May. The file data shows that the recordings were made at the times he specifies. Contemporaneous WhatsApp messages about the visit also jibe with his story. Abdulaziz asked that the men not be identified. He said he does not know if they were working for Saudi intelligence or had been forced by the government to try to bring him back. The men, both public figures who have spoken in support of the crown prince, did not answer calls or respond to questions. One said he would send a response but did not. Calls to a Saudi Foreign Ministry spokesman went unanswered.

The tone of much of the conversation is jovial and friendly. "They started with the carrots," Abdulaziz explained. "Trying to convince me to go back, bringing my brother."

He believed then that they wanted to bring him back to the kingdom, pay him off, and use his wide following on social media for Saudi propaganda, he said. At one point in the conversation, the men urged him to visit the Saudi Embassy with them to pick up a new passport – a request he now sees as potentially sinister since Khashoggi vanished inside the consulate in Istanbul.

Over caramel coffees, the two men elaborate on the options.

A scenario in which Abdulaziz returns to Saudi Arabia is a win-win situation, one man says. "Omar is a beneficiary or a winner, because he is going back home," he says. "The second side, the state, is a winner and is happy as well."

Abdulaziz's return could help polish the kingdom's image, they said. The government had already spent millions of dollars on the crown prince's Washington visit to enhance it. "This shows the kingdom is ready to take such a step," he says.

But in the second scenario, everyone loses, the man continued. "Omar is a loser because he is going to jail," he said, adding that he would be "caught at the airport". The government would also lose. Since Abdulaziz is not a significant opposition figure, any "information" obtained from him if he was detained "would not be much use for the state". But the government would be harmed by the "propaganda" from human rights groups and media covering his detention, they said.

At points, the conversation turns to how much money Abdulaziz could be paid if he accepted their offer. He says Saudi Arabia owes him about $US316,000  for cutting off the government tuition payments for his scholarship.

"I will take the money. I will give it to the homeless in Montreal, give it to the cancer hospital or buy a new watch and break it," he says in another one of the meetings. "It's not anyone's business."

During the discussions, Abdulaziz stayed in touch with Yahya Assiri, a Saudi human rights activist in London. "I kept asking him, 'Do you want anything? Do you want to find a compromise with them?' " Assiri said. "He said, 'No, no, no, I want to see what they want from me.' In my opinion, it was clear what they wanted. They wanted him to go back. To get rid of his work and silence him."

Abdulaziz said he never had any intention of returning. The men said they wouldn't transfer any money before he returned. He turned down the offer, and the men ultimately left Montreal without him.

In early August, Abdulaziz's two younger brothers were arrested in Saudi Arabia along with eight of his friends, he said, stopping to hold back the tears. He messaged one of the men who visited him in May. "I understand you are a middle man," he said, according to message screen shots. "Ask them their demands."

The reply came back, and it referred to the "bees". "The group spoke a lot about the social media accounts. And they know that you have them."

But Abdulaziz said he can't give in. "They hacked my phone and jailed my brothers, kidnapped and maybe killed my friend," he said. "I'm not going to stop."