The UK weather service said a gust provisionally measured at 196km/h – thought to be the strongest ever in England – was recorded on the Isle of Wight as Storm Eunice swept across the country’s south. 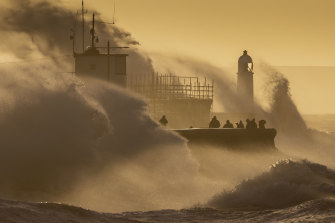 Wild weather swept across the south of England and Wales.Credit:Getty Images

The weather system, known as Storm Zeynep in Germany, then pushed into the European mainland, prompting high wind warnings in Belgium, the Netherlands, Denmark and Germany.

The storm caused mayhem with travel in Britain, shutting the English Channel port of Dover, closing bridges linking England and Wales and halting most trains in and out of London.

Plane-spotters under the Heathrow Airport flightpath filmed live as plane after plane came in for bumpy landings.

At least three people died in Britain, including a man in southern England killed when a car hit a tree, another man whose windshield was struck by debris in north-west England and a woman in her 30s who died in London when a tree fell on a car, police said. 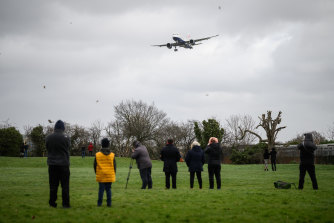 An aircraft struggles against the crosswinds as it comes into land at London’s Heathrow Airport on Friday.Credit:Getty Images

A falling tree claimed one life in Ireland, while in the Netherlands, firefighters said three people were killed by falling trees in and around Amsterdam. In neighbouring Belgium, an elderly man died when high winds pushed him into a canal in Ypres.

Eunice is the second named storm to hit Europe in a week, with the first storm killing at least five people in Germany and Poland.

Peter Inness, a meteorologist at the University of Reading in England, attributed the storms to an unusually strong jet stream over the eastern Atlantic Ocean, with winds close to 321km/h at high altitudes.

“A strong jet stream like this can act like a production line for storms, generating a new storm every day or two,” Inness said. “There have been many occasions in the recent past when two or more damaging storms have passed across the UK and other parts of Europe in the space of a few days.”

The forecast led British authorities to take the unusual step of issuing red weather warnings – indicating a danger to life – for parts of southern England, including London, and Wales that lasted through early afternoon.

A lower level amber warning was in place across all of England from 5am to 9pm on Friday.

In the town of Wells in south-west England, the wind toppled the spire of a 19th-century church. In London, high winds ripped sections of roofing from the 02 Arena, a landmark on the south bank of the River Thames that was originally known as the Millennium Dome. Firefighters evacuated 1000 people from the area and a Fugees concert was cancelled. 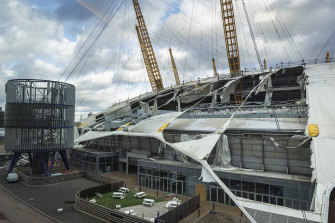 Germany’s biggest rail operator, Deutsche Bahn, cancelled all train services in the north of the country on Friday due to the storm.

In the Netherlands, authorities sent a push alert to mobile phone users on Friday afternoon, warning them to stay indoors.

Storm Eunice has been likened to what’s known as the Great Storm of 1987, which killed 18 people and knocked down 15 million trees across the UK.

Friederike Otto, a climate scientist at Imperial College who is an expert in extreme weather events, said there is no evidence climate change is leading to more violent storms in Europe.

But she said the damage caused by such storms has increased because rainfall has become more intense as a result of human-caused climate change.