Victorian Education Minister James Merlino says students have every right to use local parks during school hours after aggrieved Albert Park residents complained pupils from the booming Albert Park College were taking over the public open space beside their vertical school.

“These kids are local kids going to their local school – local schools are part of the local community,” Mr Merlino said on Wednesday morning. 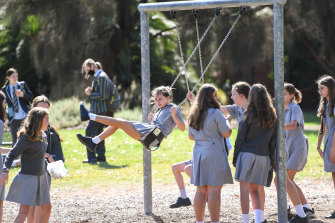 Albert Park College students at Gasworks Park. Resident complaints mean they could soon be restricted to a much smaller section of the park.Credit:Joe Armao

“It’s around an hour of the day. The schools need to have access to the park so they can run around.”

Port Phillip Council will on Wednesday night vote on a proposal to restrict the high school’s access to neighbouring Gasworks Park, the only green space available to the college’s 1550 students.

The students, who have been accused by residents of being noisy, trampling on plants and dropping rubbish, would be confined to a small, walled-off corner of the park if the council votes in support of a recommendation by its planning team.

However, Mr Merlino said the issue was a reflection of the challenges of building schools on small parcels of inner-city land to support a growing school-aged population, and urged the council and the school to resolve the issue.

“We’ve got a number of vertical schools in the inner city, and we rely on public open space with local government to provide some open green space for the kids to run around,” Mr Merlino said.

“As we see really significant enrolment growth in inner-city Melbourne, we need to build up. And we build up in a really innovative way … but in terms of that green space, and access to the green space, it’s often local parks and arrangements with local councils.”

Port Phillip Council approved a 12-month trial of opening up a portion of Gasworks Park for students a year ago, but COVID-19 curtailed student use of the park in 2020.

The motion before council on Wednesday night would extend the trial, but limit it to a much smaller section of the park.

The council’s report states that some community members have raised concerns about “poor supervision and behaviour of students”, students “not commuting via the footpath network between campuses” and “rubbish and impacts to vegetation”.

But Mr Merlino remained adamant that it was “entirely reasonable” that the students retained access to the park.

“We have less space for children, particularly the brand new vertical schools that we’ve been needing to build over the last five or six years by virtue of quite significant enrolment growth in our schools.

“We need that open space for our kids. It’s only an hour a day. I’m sure common sense will prevail.

“I want the council and the school to resolve this issue, and I am sure that they will.”