Russia’s frontline has collapsed in the south of Ukraine with dozens of towns liberated in a matter of hours, according to sources on both sides of the conflict.

Kyiv said its troops are ‘confidently advancing to the sea’ as videos showed the city of Davydiv Brid under their control along with a clutch of smaller settlements in the surrounding countryside.

Meanwhile pro-Russian military bloggers said their forces had retreated around 10 miles down the Dnipro River as the entire northern end of their territory west of the river fell into Ukrainian hands.

It comes just days after Putin declared the Kherson region – along with three others – to be part of Russia, vowing they would belong to Moscow ‘forever’. 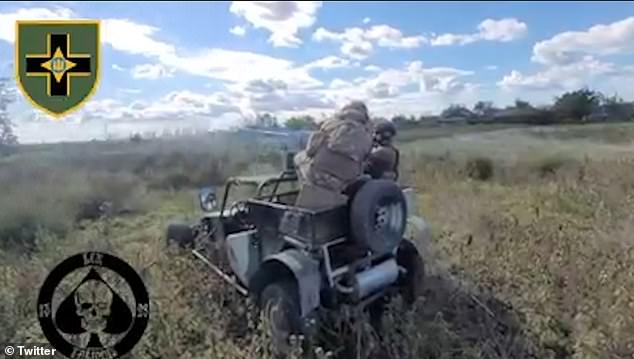 Ukrainian troops are pictured fighting in Kherson, in the south, with a heavy machinegun mounted on the top of a buggy which is being used to attack a Russian position 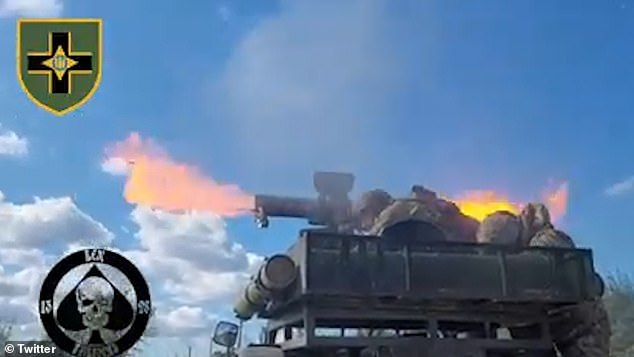 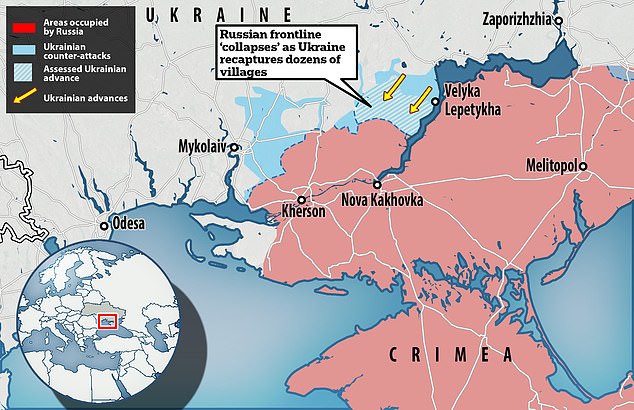 The northern end of the Russian frontline in Kherson has reportedly collapsed, with dozens of villages being retaken by the Ukrainians

Illia Ponomarenko, a respected journalist for the Kyiv Independent, tweeted: ‘Good lord, Russian front is apparently collapsing in the south.

‘I just can’t keep up with reports on newly-liberated towns coming every other hour.’

Ukraine has been attacking in Kherson since early August after launching a much-vaunted counter-offensive to recapture the city – the only regional capital to have fallen to Putin’s troops during the seven-month war.

Until now the offensive had only made slow advances, taking territory in a few areas while being pushed back in others.

However, it now appears Russian troops – who are cut off from their main supply lines after Ukraine blew up the bridges across the Dnipro River with HIMARS – can no longer hold the line.

And news of Russian defeats in the region are significant, because Putin has based the majority of his best soldiers there – up to 30,000 of them, by some accounts.

Should Moscow’s armies retreat from Kherson, then questions will be raised over whether they can continue to hold any of the territory they have taken in Ukraine.

Meanwhile, Ukraine’s offensive in the north – to the east of the city of Kharkiv – is continuing, with troops capturing two small settlements on the east bank of the Oskil River.

The territory is located just over seven miles from the border of Luhansk oblast, another of the regions that Putin annexed last week.

Ukrainian forces appear to be mopping up unoccupied towns in the region in preparation for an attack on the city of Svatove, in Luhansk.

That then opens the door for a thrust into Severodonetsk and Lysychansk, two major cities that Russia spent weeks capturing and which underpin its claim to be in control of the entire region.

Over the weekend, Russian troops pulled back from Lyman, a strategic eastern city that the Russians had used as a key logistics and transport hub, to avoid being encircled by Ukrainian forces.

Two days later, an Associated Press team reporting from the town saw at least 18 bodies of Russian soldiers still on the ground.

The Ukrainian military appeared to have collected the bodies of their comrades after fierce battles for control of Lyman, but didn’t immediately remove those of the Russians.

‘We fight for our land, for our children, so that our people can live better, but all this comes at a very high price,’ said a Ukrainian soldier who goes by ‘Rud’.

In a video address to a conference in the Turkish capital, Ankara, on Russia’s war against Ukraine on Tuesday, Perebyinis said the additional weapons wouldn’t lead to an escalation but instead would help to end the war sooner.

‘We need additional long-range artillery and ammunition, combat aircraft and armed vehicles to continue the liberation of occupied territory,’ the deputy minister said. 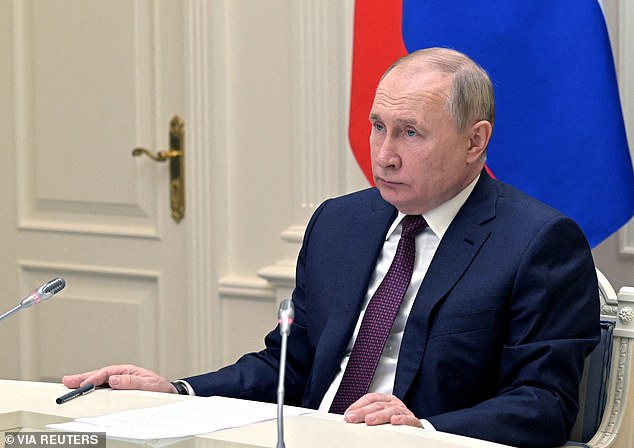 Vladimir Putin declared Kherson – along with Luhansk, Donetsk and Zaporizhzhia – to be part of Russia last week, vowing to keep them ‘forever’ 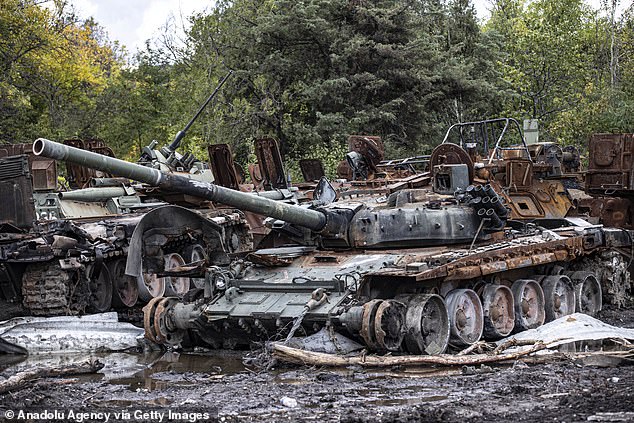 ‘We need anti-aircraft and anti-missile defense systems to secure our civilians and critical infrastructure from the terrorist attacks on the Russian forces.’

He said that the recruits were undergoing training at 80 firing ranges before being deployed to the front lines in Ukraine.

Putin’s mobilization order said that up to 300,000 reservists were to be called, but held the door open for a bigger call-up.

It sparked protests in many areas across Russia and drove tens of thousands of men to flee Russia in a challenge to the Kremlin.

The Ukrainian successes in the east and the south came even as Russia moved to absorb four Ukrainian regions amid the fighting there.

The upper house of Russian parliament, the Federation Council, voted Tuesday to ratify treaties to make the eastern Donetsk and Luhansk and the southern Kherson and Zaporizhzhia regions part of Russia. The lower house did it on Monday.

Putin is expected to quickly endorse the annexation treaties.

Russia’s moves to incorporate the Ukrainian regions have been done so hastily that even the exact borders of the territories being absorbed were unclear.