Is Russia backtracking on threatening to use nuclear weapons? Putin’s spokesman says Kremlin will only launch them if nation’s existence is threatened – after previously placing nuke forces on high alert in row with Liz Truss over Ukraine

Russia would only use nuclear weapons if its very existence were threatened, Kremlin spokesman Dmitry Peskov said today.

The comment, nearly four weeks after Russia sent its forces into Ukraine, came amid Western concern that the conflict there could escalate into a full-scale nuclear war.

‘We have a concept of domestic security, and it’s public. You can read all the reasons for nuclear arms to be used,’ Peskov said. ‘So if it is an existential threat for our country, then it can be used in accordance with our concept.’

‘There are no other reasons that were mentioned in that text,’ he said in a further reference to the country’s security concept.

Peskov’s comment came as CNN’s veteran broadcaster and interviewer Christiane Amanpour pushed him on whether he was ‘convinced or confident’ that Putin would not use the nuclear option in the Ukrainian context.

Peskov, who is a long-time ally of Russia’s president Vladimir Putin, did not elaborate on what Russia would consider an existential threat.

While the possibility of western countries invading Russia is unthinkable, the Kremlin has demanded that the NATO alliance pulls forces back from its eastern borders and for the prospect of Ukraine joining the group to be ruled out.

Meanwhile, devastating Western sanctions have caused the value of the Ruble to plummet and have crippled Russia’s economy. 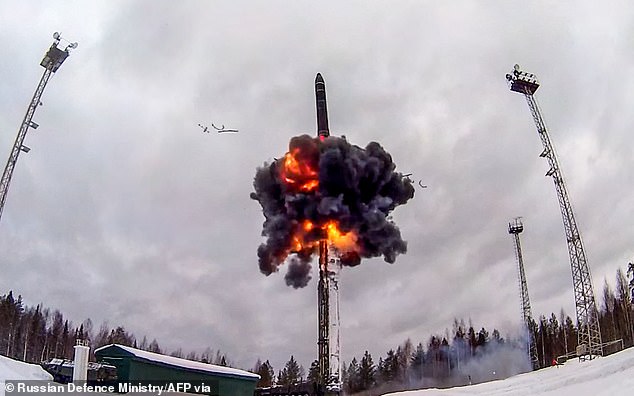 Russia would only use nuclear weapons if its very existence were threatened, Kremlin spokesman Dmitry Peskov said today. Pictured: An intercontinental ballistic missile  is launching during testing in February, in a photo released by Russia’s defence ministry

Putin last month ordered Russia’s nuclear forces to be put on high alert, and threatened NATO allies with ‘consequences greater than any you have faced in history’ should they intervene in the Ukraine conflict.

In line with the order, Russia’s defence ministry said on February 28 that its nuclear missile forces and Northern and Pacific fleets had been placed on enhanced combat duty, the Interfax news agency reported.

Experts warned at the time that Putin putting Russia’s nuclear deterrent on ‘alert’ ‘sounds like a direct threat of nuclear war’.

Nobel Peace Prize winner Dmitry Muratov, the editor of Moscow-based newspaper Novaya Gazeta, said the move meant ‘if Russia isn’t treated as he wants, then everything will be destroyed’.

United Nations Secretary General Antonio Guterres said on March 14: ‘The prospect of nuclear conflict, once unthinkable, is now back within the realm of possibility.’

‘It’s not the way a responsible nuclear power should act,’ he told reporters.

That said, Kirby stressed that Pentagon officials ‘haven’t seen anything that would lead us to conclude that we need to change our strategic deterrent posture.’

‘We monitor this as best we can every day,’ he added.

Russia maintains the world’s largest stockpile of nuclear warheads, and has earned minimal support around the world for its attack on its ex-Soviet neighbour.

Western defence officials said following Putin’s February announcement that they had not seen any significant sign of mobilisation of Russia’s nuclear forces – its strategic bombers, missiles and submarines.

But Moscow has also warned that if the United States and NATO allies supplied Ukraine with fighter jets, it could escalate and expand the war, potentially putting Russia in direct confrontation with nuclear-armed rivals in the West. 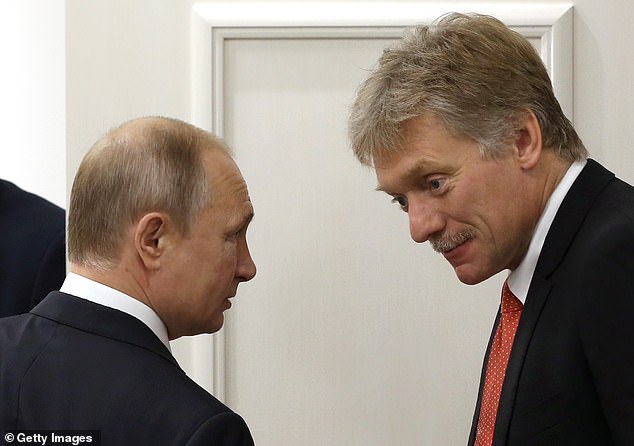 Peskov’s comment came as CNN’s veteran broadcaster and interviewer Christiane Amanpour pushed him on whether he was ‘convinced or confident’ that Putin would not use the nuclear option in the Ukrainian context. Peskov (pictured right speaking to Russian President Vladimir Putin in 2019) did not elaborate on what Russia would consider an existential threat

On Saturday it was claimed that Putin had ordered those closest to him in the Russian government to undertake nuclear drills.

A Russian expert has previously claimed that Putin has moved his family to a secret location that is not just a bunker, but a huge underground city, in order to keep them safe from a potential nuclear fallout.

In February, Peskov blamed the UK’s Foreign Secretary Liz Truss for ordering Russia’s nuclear deterrent to be on high alert, claiming she made ‘absolutely unacceptable’ remarks about wider conflict with NATO.

Putin said he had placed Moscow’s nuclear forces on a ‘special regime of combat duty’ in response to ‘aggressive statements’ from NATO members. But Peskov went further, blaming the escalation during Moscow’s invasion of Ukraine on Ms Truss.

Earlier this month Beatrice Fihn, who leads the International Campaign to Abolish Nuclear Weapons, warned Putin is using nuclear ‘blackmail’ to keep the international community from interfering in his Ukraine invasion.

‘This is one of the scariest moments really when it comes to nuclear weapons,’ she said.

Questioned further about Russia’s offensive in Ukraine, Peskov said it had no intention of occupying its neighbour and asserted his country was not attacking civilians – despite overwhelming evidence proving otherwise. 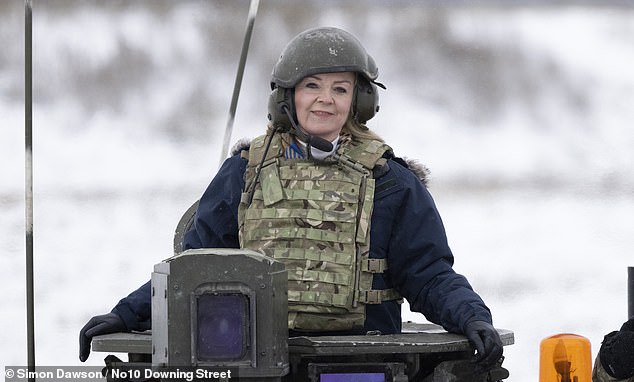 In February, Peskov blamed the UK’s Foreign Secretary Liz Truss (pictured riding a tank in Estonia before Putin’s invasion) for ordering Russia’s nuclear deterrent to be on high alert, claiming she made ‘absolutely unacceptable’ remarks about wider conflict with NATO 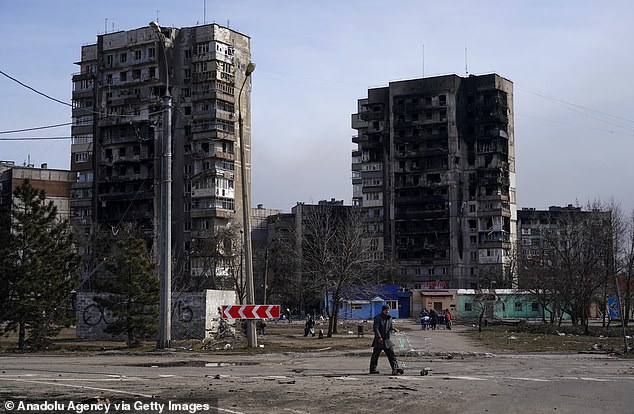 Pictured: Civilians being evacuated along humanitarian corridors from the Ukrainian city of Mariupol besieged by Russian military and rebel forces, on March 20, 2022

The main goals of the ‘operation,’ he said, are ‘to get rid of the military potential of Ukraine.’

‘This is why our military are targeting only military goals and military objects on the territory of Ukraine. Not civil ones,’ he said.

Meanwhile, Ukrainian forces have fought off continuing Russian efforts to occupy Mariupol and claimed to have retaken a strategic suburb of Kyiv on Tuesday, mounting a defence so dogged that it is stoking fears Putin will escalate the war to new heights.

Western nations are gearing up to impose further sanctions on Russia to force it to reconsider its actions. They will also tighten existing measures, increasing Russia’s isolation from international trade and finance.

Biden is planning to announce new sanctions against Russia on Thursday while in Brussels for meetings with NATO and European allies, according to a top national security aide.

The U.S. and allies have already imposed sanctions, as part of an effort to weaken Putin’s position at home and starve funding from his war machine.

Washington has also worked with European and N.A.T.O. governments to deliver billions of dollars of weapons and aid to Ukraine.

During a briefing at the White House today, National Security Adviser Jake Sullivan was also asked about Russia’s potential use of nuclear weapons. 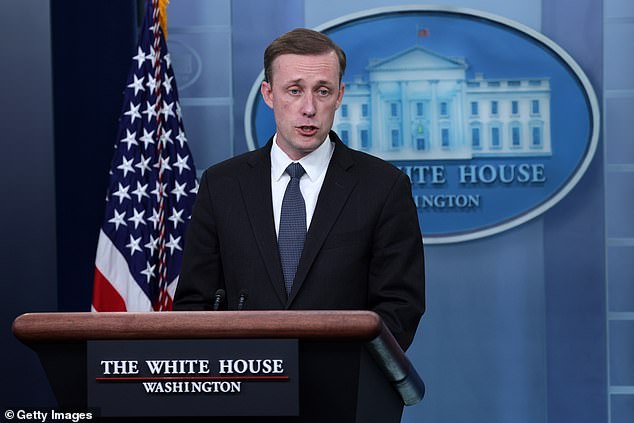 During a briefing at the White House today, National Security Adviser Jake Sullivan (pictured) was also asked about Russia’s potential use of nuclear weapons. He said US President Joe Biden would confer with NATO allies before using nuclear weapons

‘We have not changed our nuclear posture today. But we are constantly monitoring for that potential contingency and of course we take it as seriously as one could possibly take it,’ he said.

‘We will be consulting with allies and partners on that potential contingency among a range of others and discussing what our potential responses are.’

Having failed to seize the capital Kyiv or any other major city with a swift offensive, Russian forces are waging a war of attrition that has reduced some urban areas to rubble and taken a huge civilian toll.

The UN human rights office in Geneva said on Tuesday it had recorded 953 civilian deaths and 1,557 injured since the invasion. The Kremlin denies targeting civilians.

Western officials said on Tuesday Russian forces were stalled around Kyiv but making some progress in the south and east. Ukrainian fighters are repelling Russian troops in some places but cannot roll them back, they said.

However, Peskov said ‘no one’ had ever thought the operation in Ukraine would take just a couple of days and the campaign was going to plan, TASS news agency reported.

Peskov’s comments came as Ukrainian officials accused Russia of using chemical weapons in its assault on the city of Kramatorsk.

The alleged use of such a weapon, which comes after the US warned the Kremlin was planning such an attack, would constitute a war crime.

Oleksiy Biloshytskiy, deputy head of Kyiv police, made the accusation in a post on Facebook. ‘Another use of phosphorus ammunitions in Kramatorsk,’ he wrote.

He also shared a video of a burning substance that looked like a chemical, according to The Times. The claim could not be immediately verified.

Peace talks between Ukraine and Russia have been ongoing, but Ukrainian President Volodymyr Zelensky has not been granted a direct meeting with Putin, as requested. 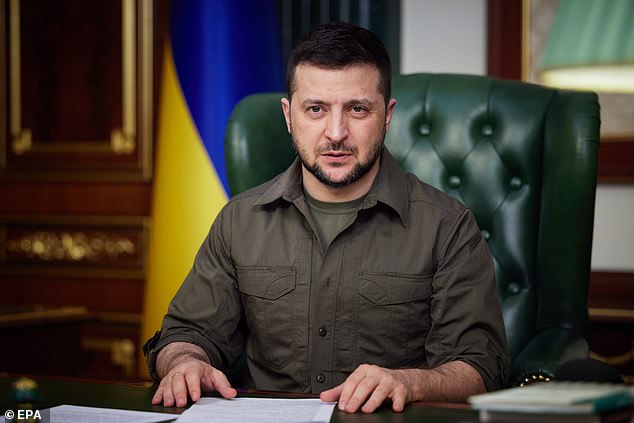 Peace talks between Ukraine and Russia have been ongoing, but Ukrainian President Volodymyr Zelensky (pictured) has not been granted a direct meeting with Putin, as requested

Zelensky has said he would be prepared to consider waiving any bid by Ukraine to join NATO – a key Russian demand – in exchange for a cease-fire, the withdrawal of Russian troops and a guarantee of Ukraine’s security.

The Kremlin is demanding Ukraine disarm and declare itself neutral.

Peskov said Tuesday that he could not share details of ongoing talks, saying that making them public would damage negotiations.

U.N. Secretary-General Guterres said he saw progress in the talks.

‘From my outreach with various actors, elements of diplomatic progress are coming into view on several key issues,’ and the gains are enough to end hostilities now, he said. He gave no details.

French President Emmanuel Macron talked with both Putin and Zelenskyy on Tuesday about terms of a potential cease-fire, according to a statement from the French presidency.

They reached ‘no agreement,’ the statement said, but Macron ‘remains convinced of the need to continue his efforts’ and he ‘stands alongside Ukraine.’

Meanwhile, Zelensky has been invited to address a special NATO summit Thursday discussing the Russian invasion of his country, an official said.

‘This will be an opportunity for allied leaders to hear directly from President Zelensky about the dire situation facing the people of Ukraine because of Russia’s aggression.

Here’s how YOU can help: Donate here to the Mail Force Ukraine Appeal

Calling upon that human spirit, we are supporting a huge push to raise money for refugees from Ukraine.

For, surely, no one can fail to be moved by the heartbreaking images and stories of families – mostly women, children, the infirm and elderly – fleeing from the bombs and guns.

As this tally of misery increases over the coming days and months, these innocent victims of this conflict will require accommodation, schools and medical support.

Donations to the Mail Force Ukraine Appeal will be used to help charities and aid organisations providing such essential services.

TO MAKE A DONATION IN THE US

You can donate via CAF America at: https://donations.cafamerica.org/mail-force/