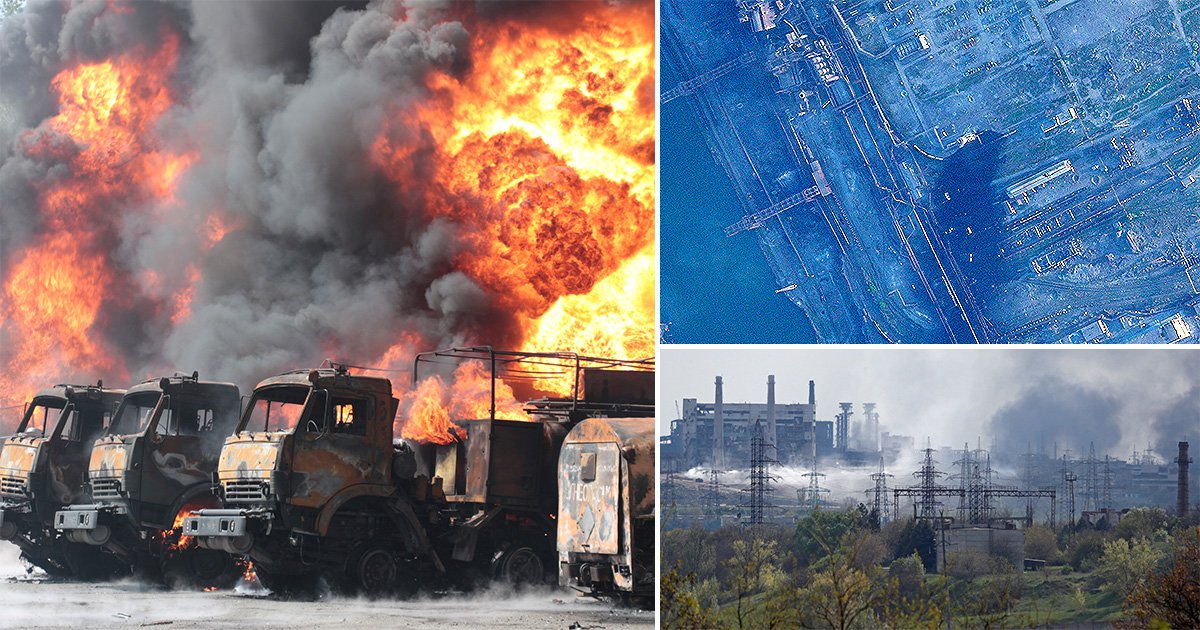 Russian forces have bombarded Ukrainian rail stations and other supply-line targets to try and disrupt the deliveries of Western weapons, as heavy fighting rages at the already shattered Azovstal steel mill.

The Kremlin used missiles to destroy electric power facilities and struck troop strongholds and fuel and ammunition depots across the country.

They have been accused of ‘resorting to the missile terrorism tactics in order to spread fear’ by Ukrainian Foreign Minister Dmytro Kuleba.

Vladimir Putin is said to be facing humiliation as he reportedly scales down his Victory Day Parade – which commemorates World War II victory over the Nazis – by a third following large losses.

All eyes are on Monday’s Red Square gathering amid speculation the Russian leader will use the event to announce so-called ‘victory’ in Ukraine.

Alternatively, he could declare all-out war, allowing him to send in martial law and mobilise reservists. Kremlin spokesman Dmitry Peskov has dismissed the rumours as ‘nonsense’.

Last night’s operation had ‘no appreciable impact’ on resupplying Ukrainian soldiers, a senior U.S. defense official, speaking on condition of anonymity, has claimed.

But it came as Russian soldiers storm the last stronghold of Ukrainian resistance in Mariupol.

Denys Prokopenko, commander of the Ukrainian Azov regiment that is defending the plant, said Russian forces got into the plant’s territory, although a Kremlin official brushed aside these claims.

In a video, Mr Prokopenko noted ‘heavy, bloody battles’, saying: ‘The situation is extremely difficult, but in spite of everything, we continue to carry out the order to hold the defence.’

More than 300 civilians were evacuated to Zaporizhzhia from the war-torn city on Wednesday – including ‘several dozen civilians’ who had been trapped in the steel mill, according to the Red Cross.

‘We are relieved that more lives have been spared’, said Pascal Hundt, the ICRC’s head of delegation in Ukraine.

‘We welcome the renewed efforts of the parties with regards to safe passage operations. They remain crucial and urgent in light of the immense suffering of the civilians.’

Civilians rescued in the previous days have claimed Russian soldiers checked their underwear and called them ‘Ukrainian scum’.

Part of the evacuation deal was reportedly that those being saved had to face ‘screenings’ by Russian troops at the occupied town of Bezimenn.

It was reported yesterday that 200 people were still inside the mill and 100,000 in the city overall.

Air raid sirens sounded in other cities across the country on Wednesday night, with attacks reported near Kyiv, the capital; in Cherkasy and Dnipro in central Ukraine; and in Zaporizhzhia in the southeast.

In Dnipro, authorities said a rail facility was hit and videos on social media suggested a bridge there was attacked.

There was no immediate word on casualties or the extent of the damage.

Meanwhile, Belarus, which Russia used as a staging ground for its invasion, announced the start of military exercises on Wednesday. A top Ukrainian official said the country will be ready to act if Belarus joins the fighting.

Responding to the latest strikes in his nightly video address, Ukrainian President Volodymyr Zelensky said: ‘All of these crimes will be answered, legally and quite practically – on the battlefield.’