Rush-hour traffic congestion in London reached its highest level so far during England’s third national lockdown this morning as key workers continued to commute into work the face of rising coronavirus infections.

Data from TomTom revealed congestion in the capital hit 28 per cent at 7am, beating yesterday’s figure of 25 per cent and every day last week which ranged from 19 to 22 per cent after the lockdown was imposed on January 4.

The level at 8am today was 29 per cent, which was also higher than yesterday’s 27 per cent and above every day last week which ranged from 20 to 23 per cent. This also compares to a 2019 average for the time of 67 per cent.

The congestion level represents the extra travel time for drivers on average compared to baseline uncongested conditions – so a 29 per cent level means a 30-minute trip will take nine minutes more than with no traffic. 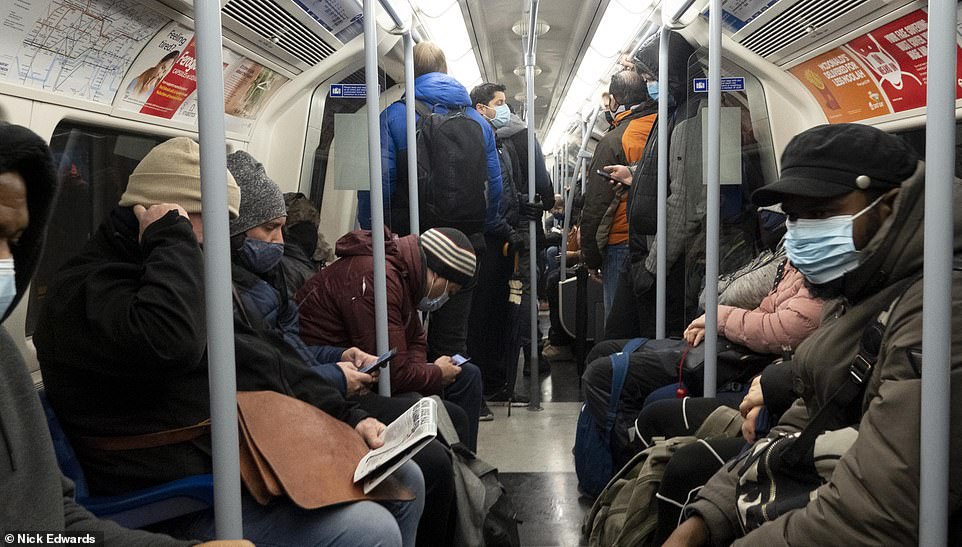 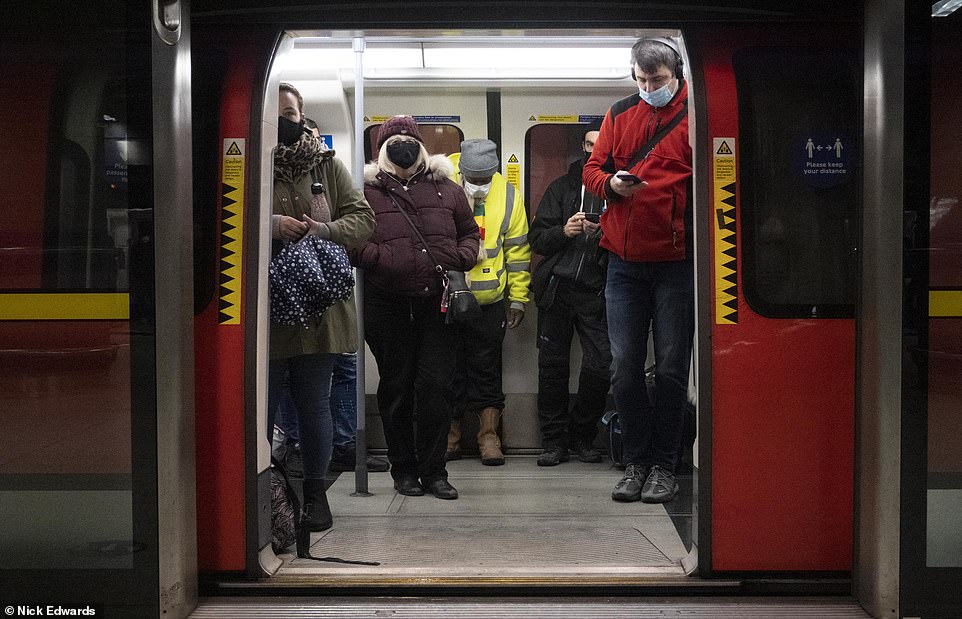 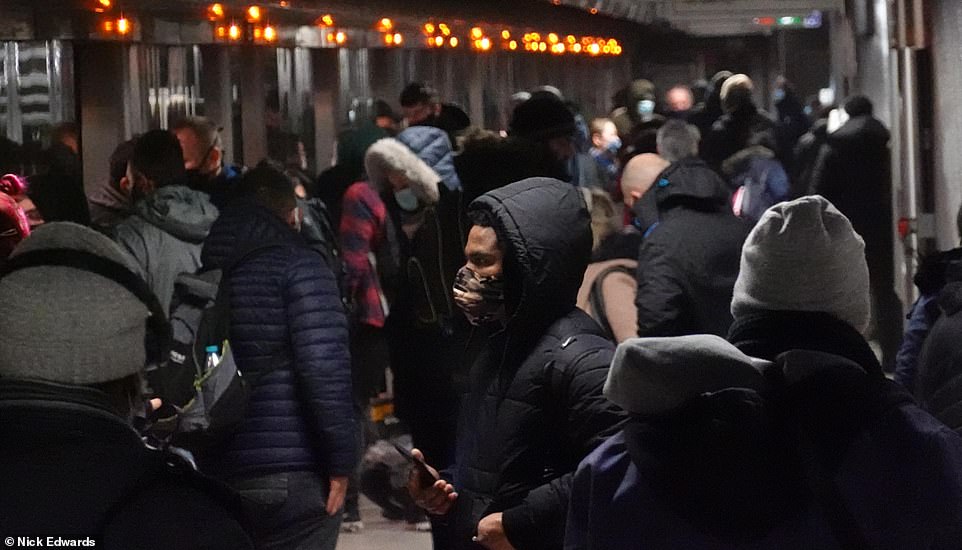 Amid increasing calls for tougher restrictions for England, data yesterday revealed activity has dipped since the third national lockdown was imposed but has not fallen to the levels of March and April during the first lockdown.

Driving levels in the country on January 6, when the current lockdown rules came into legal force, were around 62 per cent of the pre-pandemic average, according to data from Apple.

This is compared to 35 per cent on March 26 last year – the day the first lockdown legally came into force – and around 73 per cent when restrictions in November took effect.

For those walking, Apple’s mobility trends report shows that movement levels on January 6 this year were around 61 per cent of pre-pandemic levels, compared to 38 per cent on March 26, 2020.

Meanwhile data from journey planning app Citymapper on the first day of the spring lockdown found that only 10 per cent of Londoners were moving compared to usual. 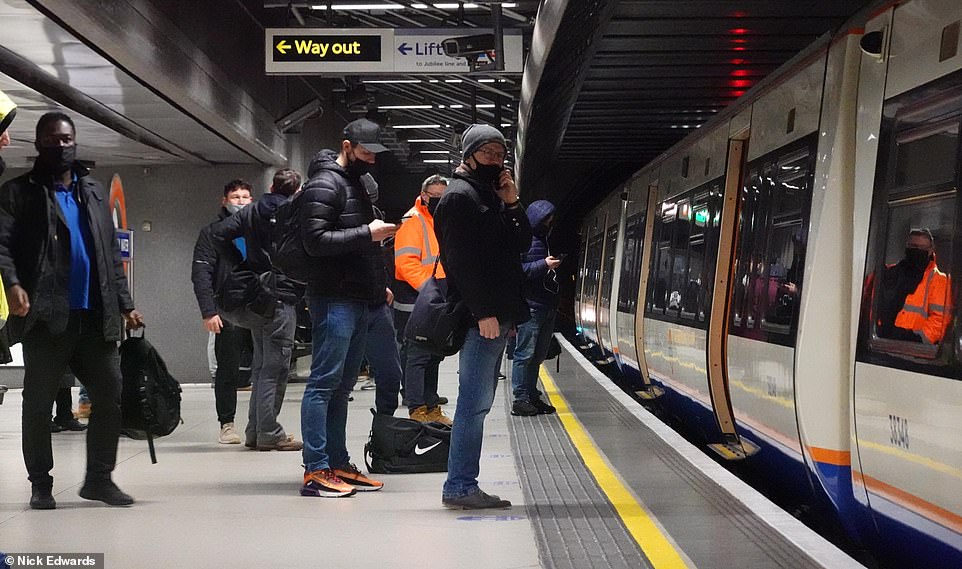 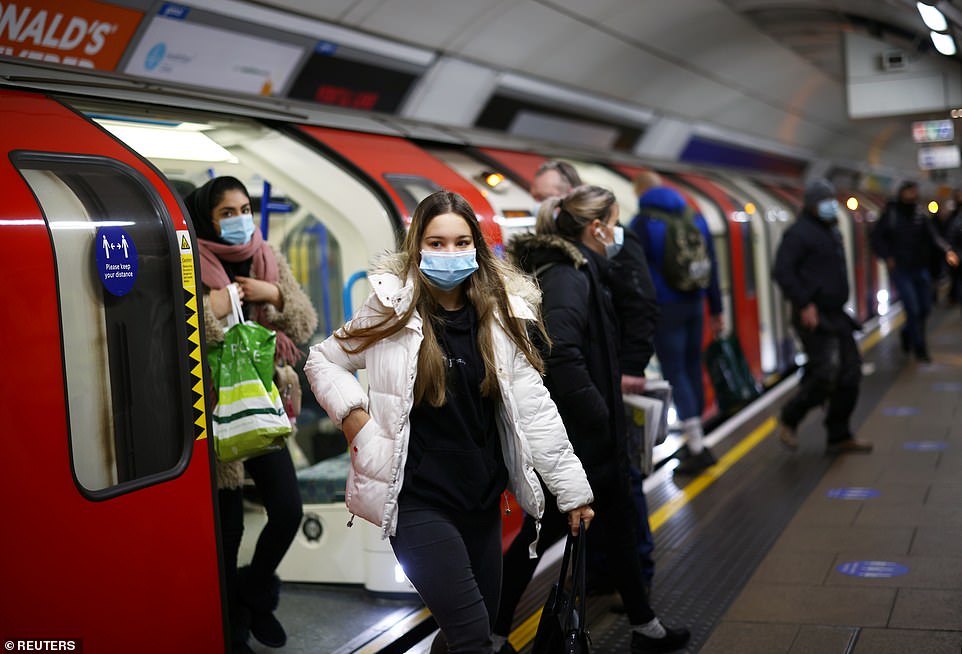 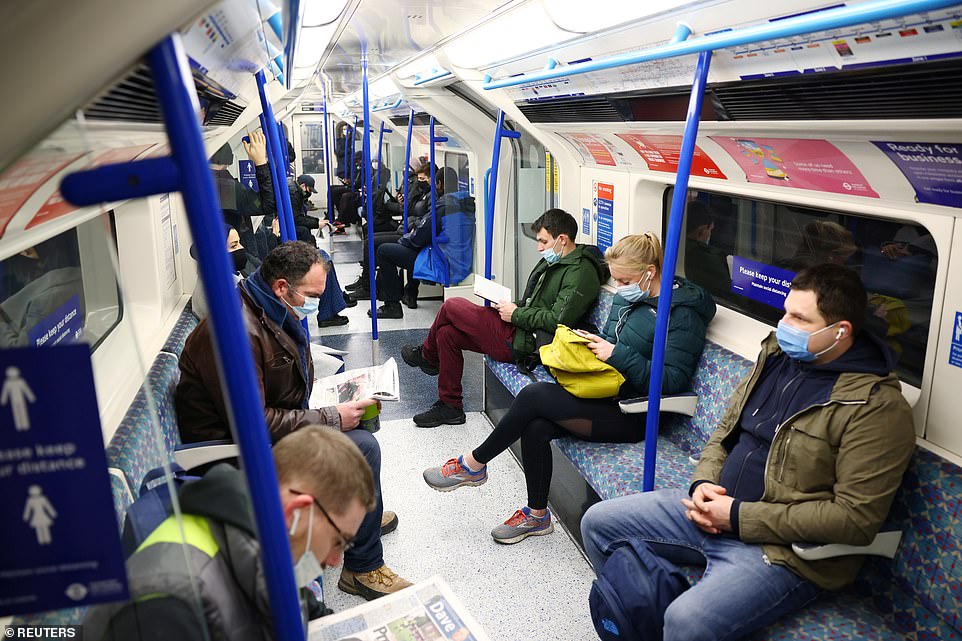 While this gradually increased as restrictions were eased over the summer, when England went into its second lockdown on November 5 – Citymapper’s mobility index found it was 28 per cent.

On January 4, when Prime Minister Boris Johnson announced the current lockdown, it was 23 per cent – falling to 19 per cent when the restrictions came into force two days later.

The app, which is used for public transport, walking and cycling, found that mobility fell to 26 per cent of normal levels in Manchester on January 6, compared to 12 per cent at the start of the spring lockdown.

Elsewhere, mobility in Birmingham was 27 per cent of pre-pandemic levels when the current lockdown began, compared to 16 per cent on March 26 and 42% when England went into its second lockdown on November 5.

In the capital, tube usage on January 6 was just under a fifth (17 per cent) of that prior to the coronavirus crisis, according to data from Transport for London (TfL). 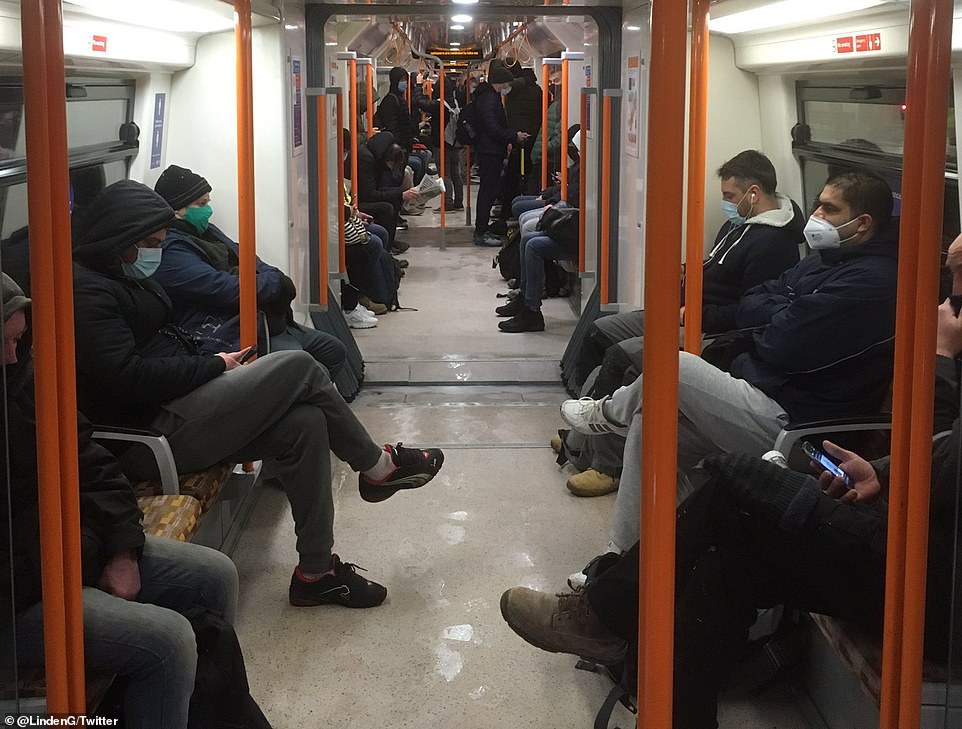 A London Overground train bound for Clapham Junction is pictured at 6.45am this morning in an image posted online 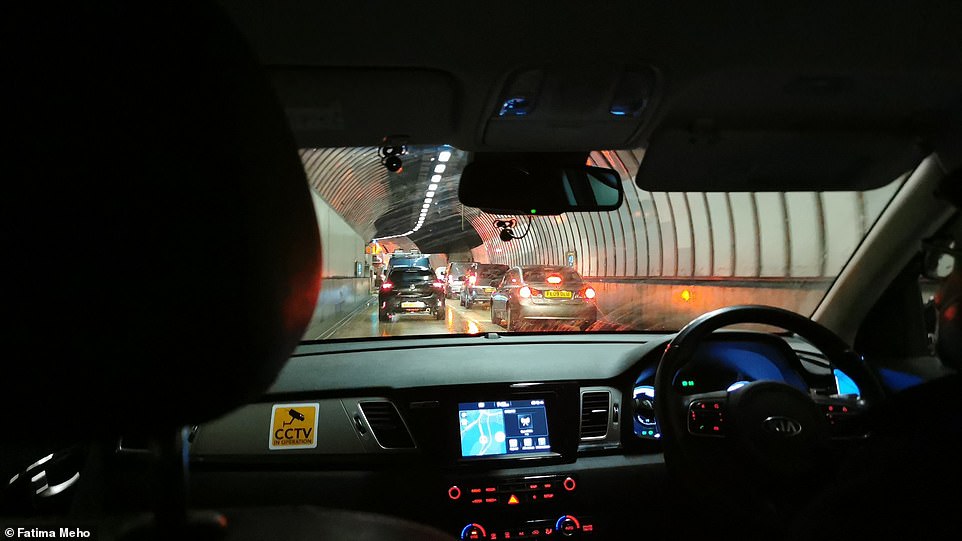 Fatima Meho tweeted today: ‘How is it lockdown? Trying to get to work and the roads are jam packed! No wonder this virus is out of control. If I wasn’t a nurse I’d be home hiding away from this virus. Covid-19 is not a hoax or joke’

This is compared to just 6 per cent on March 26, when the first lockdown began, and 23 per cent on November 5, statistics from the Department for Transport (DfT) show.

In the spring lockdown, tube usage remained below 10 per cent until June 1 – when schools welcomed back certain age groups and groups of up to six people were permitted to meet outdoors.

Similar to the first lockdown, schools in England are currently closed apart from for vulnerable children and those whose parents are key workers.

But early years settings such as nurseries and childminders are permitted to stay open, while existing childcare bubbles are allowed to stay in place.

Lucy Yardley, professor of health psychology at the University of Bristol and a member of the Scientific Advisory Group for Emergencies, said it was not surprising activity levels are higher now when compared to last spring. 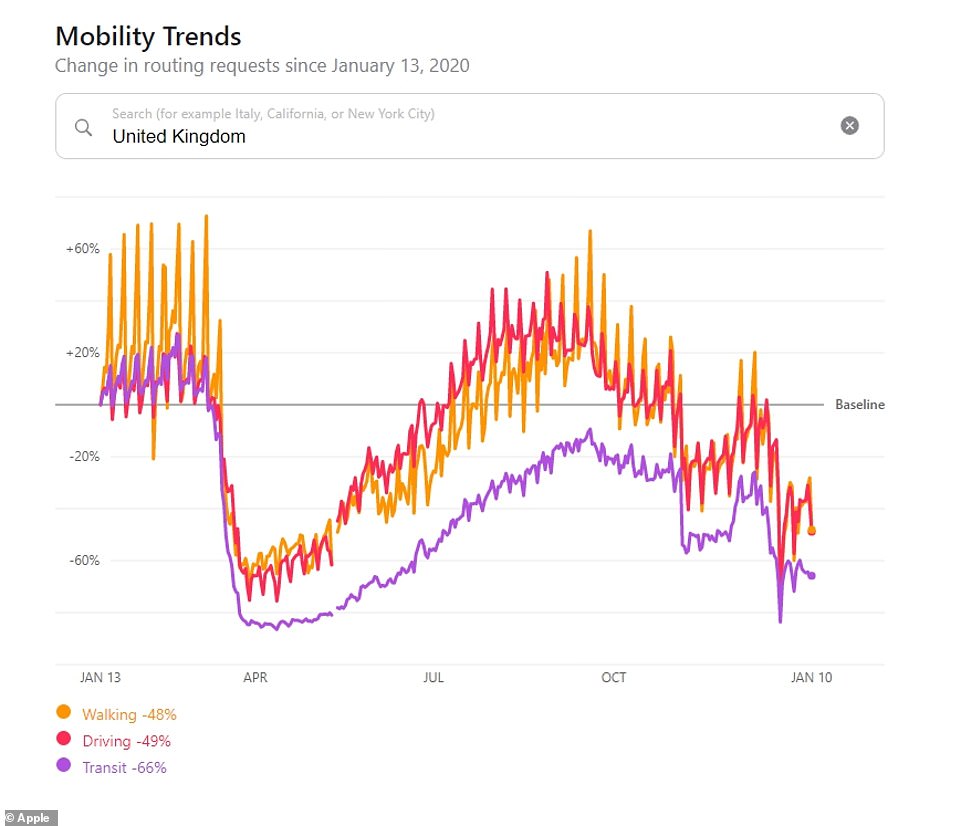 Walking levels in the UK are down 48 per cent, driving down 49 per cent and public transport use down 66 per cent based on Apple mobility data. These figures are compared to a baseline of January 2020, as shown in the graph above 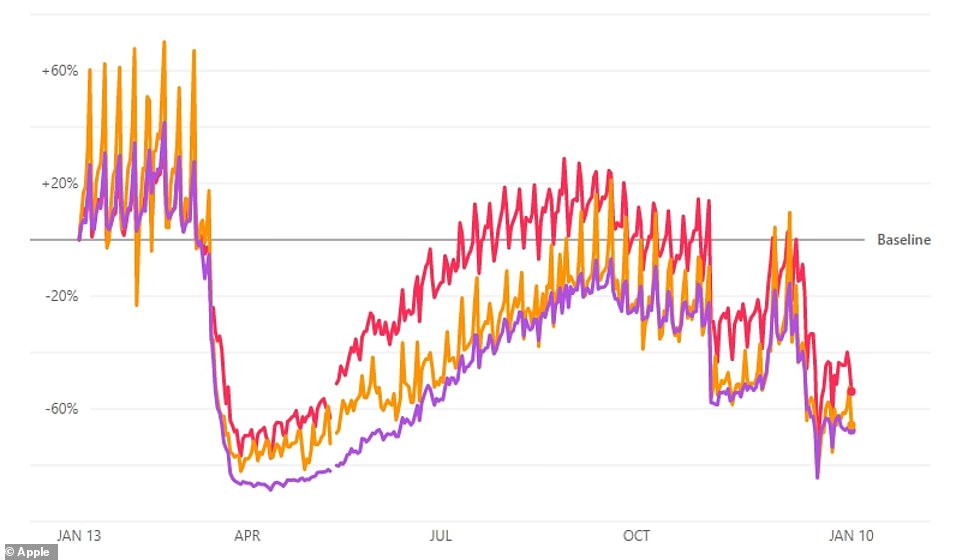 LONDON: Driving is down 54 per cent, walking down 66 per cent and public transport 68 per cent compared to January 2020 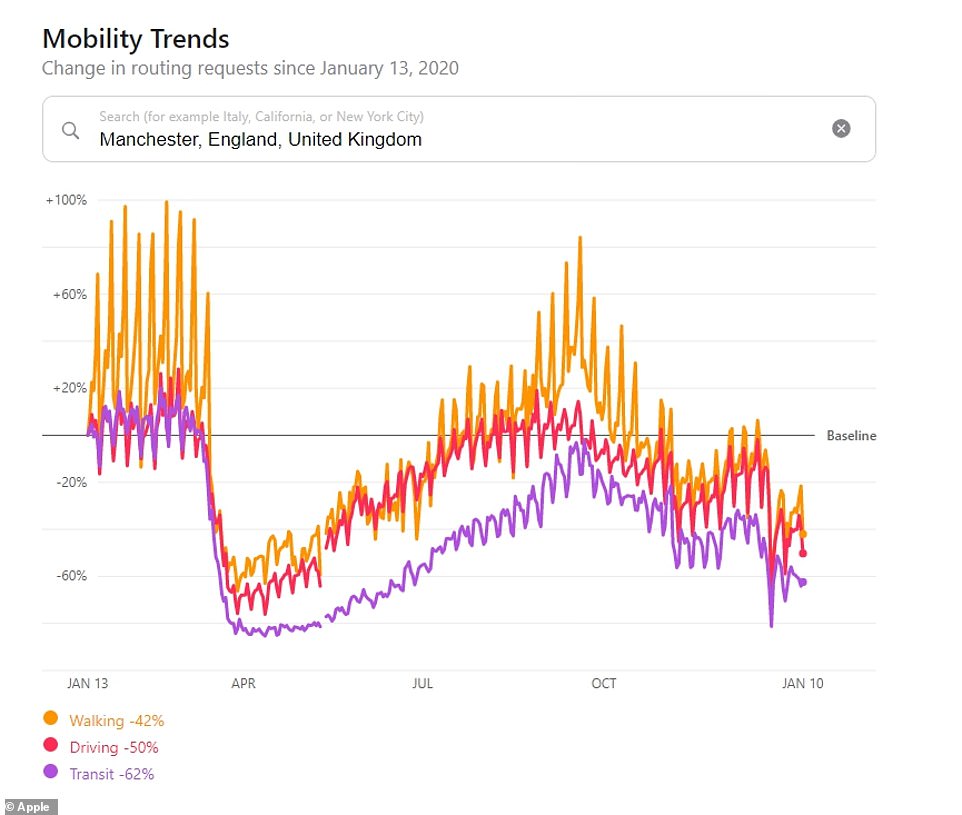 MANCHESTER: Walking is down 42 per cent, driving 50 per cent and public transport 62 per cent compared to January 2020 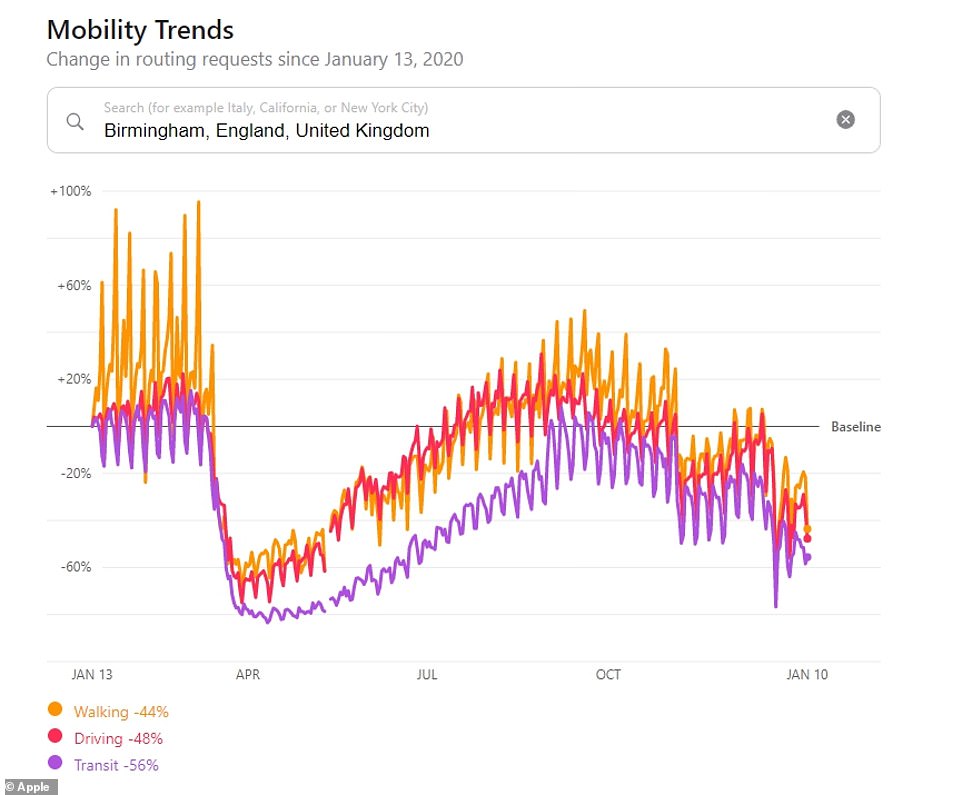 BIRMINGHAM: Walking is down 44 per cent, driving 48 per cent and public transport 56 per cent compared to January 2020

‘It is certainly the case that there is more activity going on. But there is a lot more activity that is allowed and so it is not surprising that more people are out and about,’ she told BBC Radio 4’s Today programme yesterday.

‘So it is not necessarily that people are not obeying the rules, though of course anything that we can do to make sure that they do is a good thing. But I think it’s more that people are being allowed to do more and so they are.’

Unlike in March, when the first lockdown temporarily halted the majority of activity in the housing market, the buying and selling of properties is permitted to continue.