A court in Rome has overridden the country’s interior minister and allowed a Spanish rescue ship carrying nearly 150 migrants to enter Italian waters.

The ruling today came in defiance of a ban imposed by Interior Minister Matteo Salvini who said the humanitarian vessel should not be allowed to dock.

As a result of the judge’s decision to suspend the decree the Open Arms ship headed for the island of Lampedusa today with 147 rescued migrants on board.

Proactiva Open Arms, the charity which operates the boat, said it would not try to force entry to Lampedusa port, as another Dutch rescue vessel, the Sea-Watch 3 did in June, prompting its seizure and the arrest of its captain.

Both Italy and Malta refused vessels permission to dock and unload their passengers leaving the passengers stranded at sea for 13 days. 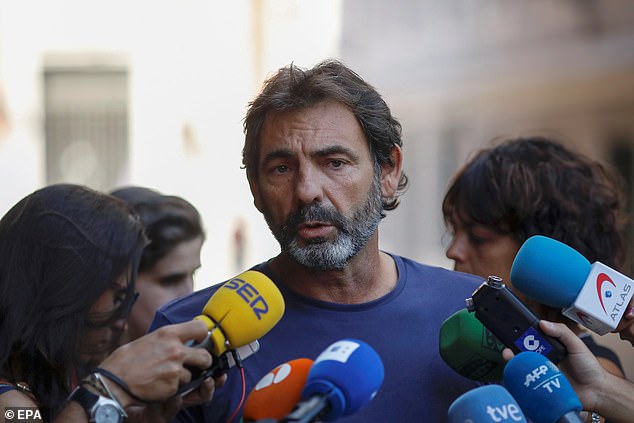 Proactiva Open Arms NGO founder and president, Oscar Camps (centre), speaking to media in Madrid today after being granted access to dock at an Italian port 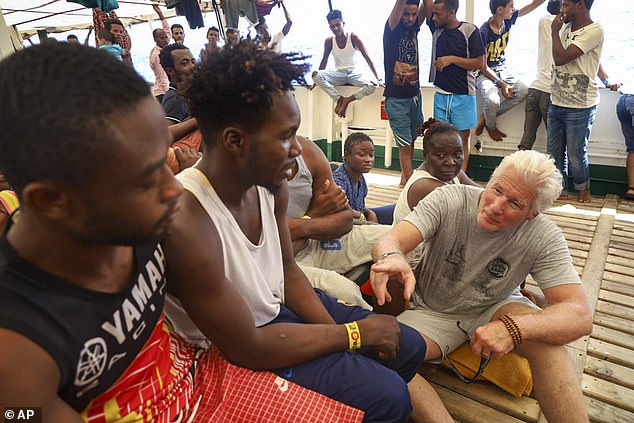 Actor Richard Gere, right, talks with migrants aboard the Open Arms Spanish humanitarian boat as it cruised in the Mediterranean Sea on Friday

Salvini announced a swift appeal against the judge’s ruling and signed another decree, saying that the Open Arms behaviour showed its ‘political objective of bring [migrants] to Italy’.

Hollywood actor Richard Gere was pictured on Friday delivering food and supplies to the migrants on board.

His intervention caused Salvini, who is also deputy prime minister, to urge the star to ‘support them [migrants] in his villas’ in Los Angeles.

The Open Arms is seeking shelter from eight-foot (2.5-metre) swells along with the Ocean Viking ship operated by SOS Mediterranea and Doctors Without Borders (MSF), which has more than 350 migrants plucked from the Mediterranean on board.

The charity vessel Open Arms appealed to the court to let it come to Italy, saying international maritime law meant it had a right to bring the migrants to safety.

Salvini quickly responded to the court saying he would not allow the ship entry regardless of the ruling, setting up another high-profile conflict over the issue of immigration which has proved his biggest vote-winner. 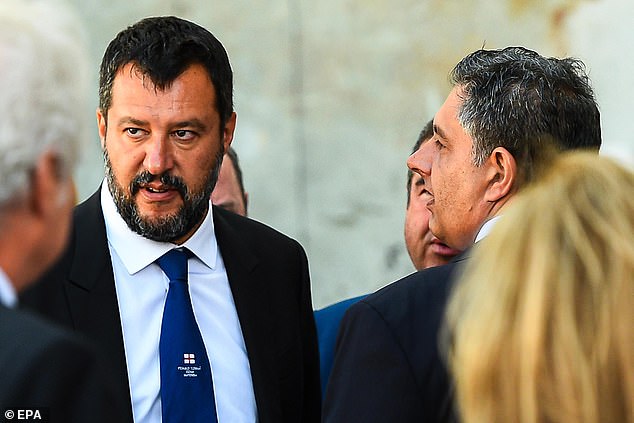 Italian Deputy Prime Minister and Minister of the Interior Matteo Salvini said he will appeal the Rome court’s ruling to allow a migrant ship access to an Italian port. He is pictured (above) today at the first anniversary of the Morandi highway bridge collapse in Genoa

Open Arms’ founder Oscar Camps, speaking to reporters in Madrid, said the boat would now set sail for the Italian island of Lampedusa.

Once in Italian waters, the NGO will request medical evacuation for all those on board, Camps added.

Camps said that in Italy ‘everyone does not think like Salvini’.

He added: ‘It’s a success. International maritime law prevails. All that is missing is that we be assigned a port

‘This is another step forward. We may be able to disembark sooner than expected. We can enter Italian waters without fear of being fined or having the boat confiscated.

Salvini said on Tuesday he would block both the Open Arms and another vessel operated by French charities, the Ocean Viking, from bringing to Italy more than 500 migrants they had picked up off Libya since last week.

In a written ruling, the Rome court said the Open Arms complaint ‘does not appear to be completely without legal basis’. It added that the charity vessel clearly faced an ‘exceptionally serious’ situation. 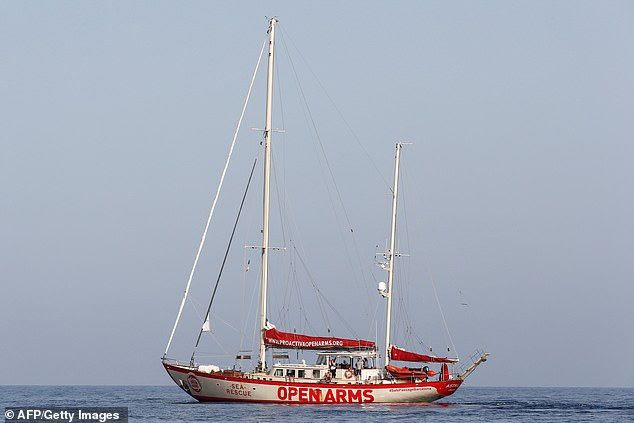 Responding to the ruling, Salvini told supporters during a visit to Recco, in northern Italy, that he would continue to refuse the ship entry ‘because I will never be an accomplice to human traffickers’.

The interior ministry later issued a statement saying it would appeal against the ruling to the State Council, a higher administrative body, because the court did not have all the relevant facts when it made its ruling.

‘For days, Open Arms remained in Libyan and Maltese waters, interfering with other rescue operations, and systematically collected people with the political objective of bringing them to Italy,’ the ministry said.

But from a beach in the northwest of Italy, Salvini complained: ‘What a strange country. The court in Lazio [Rome] wants to authorise a foreign boat to disembark foreign migrants in Italy.’

On Wednesday Camps warned that fights may break out at any moment among the migrants stranded on the vessel.

‘We could have a fight within a half-hour with a serious injury, or worse, someone could die on board due to violence,’ he told Spanish radio station Cadena Ser.

‘It would be a tragedy, it would be unforgivable.’ 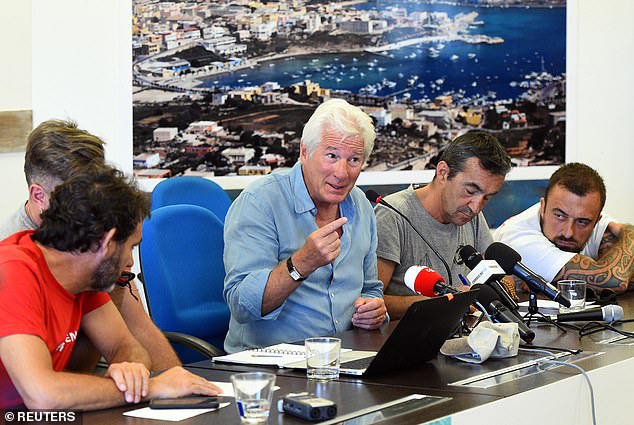 The 19 crew members on the Open Arms are finding it harder to contain tensions on board, he added.

Many of the migrants, mainly from Africa, are suffering from ‘very high levels of post-traumatic stress’ and anxiety over their future.

They must share just two bathrooms and a living space of only 2,000 square feet (180 square metres), Camps said.

Two babies were evacuated by helicopter from the ship to Malta on Wednesday for health reasons, Camps said.

Earlier this month Salvini introduced a new law hiking fines for ships that enter Italian waters without authorisation to up to 1 million euros ($1.12 million).

The Open Arms, which has rescued some 160 people in the last two weeks, faced rough weather on Wednesday with storms forecast later in the evening.