This is the moment Rolls-Royce’s chief executive smirked while discussing 9,000 aerospace job losses in a disastrous BBC TV interview this afternoon.

Warren East, 58, stared off camera as he was questioned by the BBC’s Victoria Derbyshire over the number of job cuts to the aerospace giant’s workforce in the UK.

It follows Rolls-Royce saying today it plans to cut at least 9,000 jobs in the latest blow to the aviation industry, as it continues to be hammered by the coronavirus crisis.

The Derby-based manufacturer, which has 52,000 employees worldwide, said it had been forced to conduct a ‘major reorganisation’ of the business to adapt to a fall in demand for its engines as planes remain grounded. 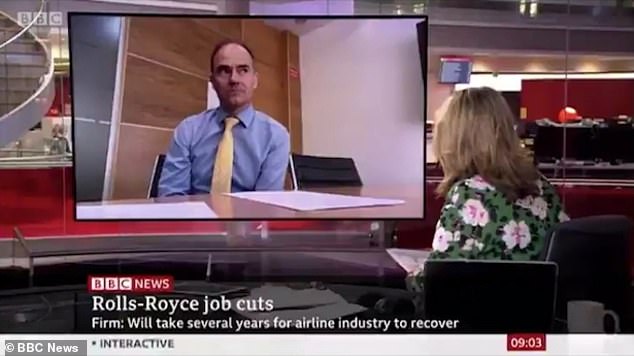 Warren East, 58, pictured staring off camera as he was questioned by the BBC’s Victoria Derbyshire this afternoon over the number of cuts to the aerospace giant’s jobs in the UK 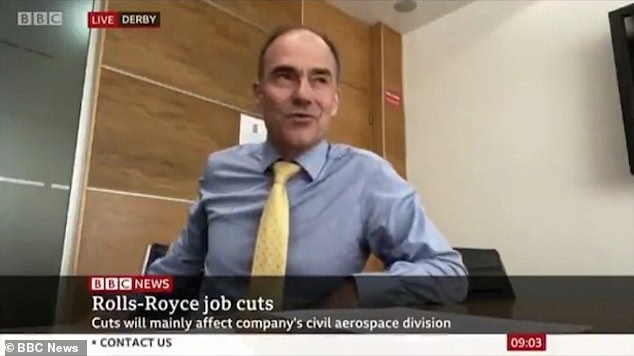 Rolls-Royce’s chief executive pictured during the BBC interview, in which he appeared to smirk while being questioned over the number of civil aerospace job losses in the UK

The chief executive appeared to smirk and look off-camera, before replying: ‘Approximately two thirds of our total civil aerospace workforce is in the UK, and so that’s a good first proxy for the number of people who will be unfortunately losing their jobs in the UK.’

The BBC host asked: ‘But it is thousands of job losses?’

Mr East confirmed: ‘It is thousands of job losses, there’s nothing we can do about that. I mean the scale of this is terrible.’

The interview sparked backlash amongst social media users, with one tweeting: ‘If you’re a CEO doing a live BBC interview: 1) don’t have someone distracting you 2) don’t laugh while announcing 9,000 job losses.’

One commented: ‘Simply unprofessional. No excuse for this level of performance.’

A third added: ‘How ridiculous and unprofessional!’

Rolls-Royce employs 24,000 staff in the UK, around 16,000 of whom are aerospace engineers. However, it is not yet fully known how many jobs will be cut here. 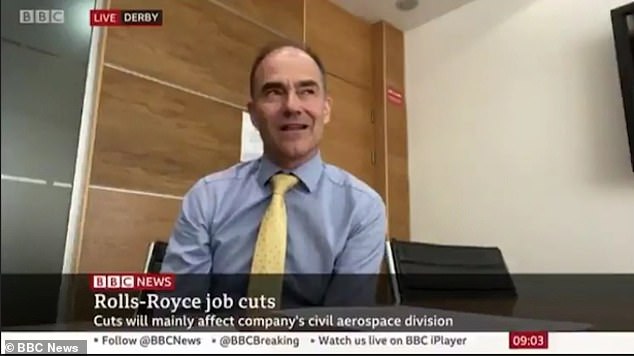 During the BBC interview, Mr East confirmed there will be ‘thousands of job losses’ in the company’s UK civil aerospace sector, adding: ‘I mean the scale of this is terrible’ 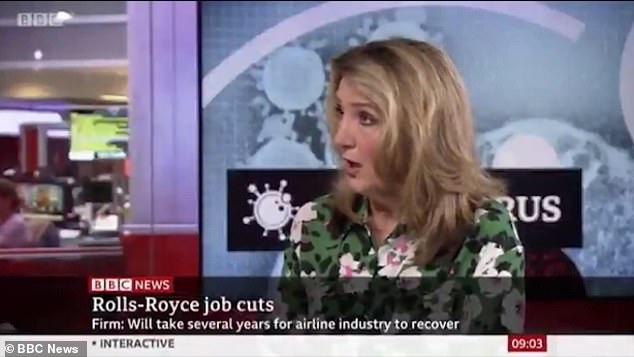 BBC presenter Ms Derbyshire, above, asked: ‘It is thousands of job losses?’ Mr East sparked backlash online after smirking and staring off camera during the interview

Rolls-Royce said the cuts could result in £700 million in savings towards an overall aim of £1.3 billion in annual savings.

It said it will also cut spending across its plant, property and other areas to strengthen its finances.

Mr East earlier said: ‘This is not a crisis of our making. But it is the crisis that we face and we must deal with it.

‘Our airline customers and airframe partners are having to adapt and so must we.

‘Being told that there is no longer a job for you is a terrible prospect and it is especially hard when all of us take so much pride in working for Rolls-Royce.

‘But we must take difficult decisions to see our business through these unprecedented times.’ 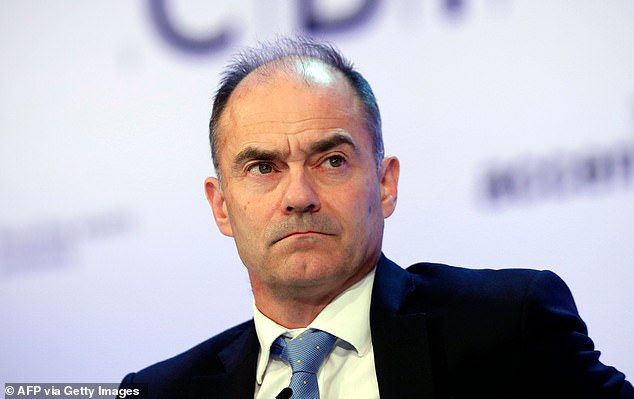 Rolls-Royce CEO, Warren East – pictured in 2018 – said the job cuts were necessary to protect the company’s future amid the huge slump in demand for the company’s plane engines caused by coronavirus

The job losses would mostly take place in its civil aerospace business, the company said, as it started consultations with unions.

Market strategist Bill Blain, from Shard Capital, said: ‘The thousands of jobs being cut by Rolls-Royce is a tragedy, but it will dwarfed by the impact felt across the UK small and medium enterprise (SME) sector.

‘Rolls Royce sub-contracts work to a multitude of SMEs across the UK, some quite specialist. This is the problem the UK is facing. When one big company contracts, the ripple effect is felt across the nation.

‘The Chancellor will need to come up with a long-term package to help these highly specialised and focused companies while they innovate new products and find new customers.’

The global aviation industry has taken a battering from the impact of coronavirus, with most airlines only going ahead with a handful of flights.

Britons have been warned against all but essential travel, in line with many other countries, while the prospect of a compulsory two-week quarantine for people returning to the UK could put even more people off flying.

It is estimated that 140million fewer passengers will take to the air this year, hitting the sector with an estimated £21.1billion in lost revenue. 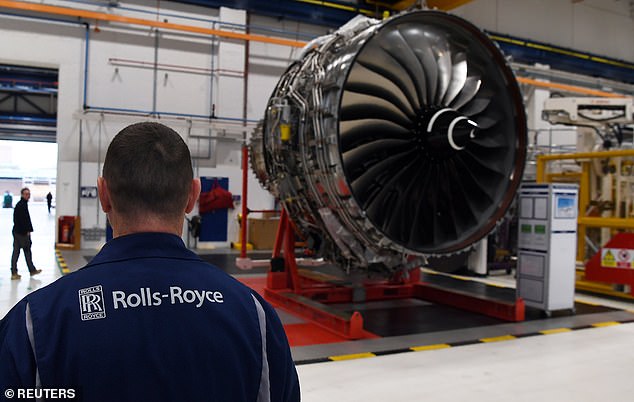 Rolls-Royce said it expects the job losses from its global workforce of 52,000 as part of a ‘major reorganisation’ of the business to adapt to a fall in demand. Pictured is one of the company’s Trent XWB being built at its factory in Derby in 2016

Rolls-Royce’s rival, Airbus, revealed in April it is ‘bleeding cash’ and feared its very existence was under threat.

Airbus employs 13,500 people in the UK, including in Broughton, North Wales, and Filton, Bristol, where wings for commercial aircraft are designed, tested and built.

Both Airbus and Rolls-Royce have lobbied the government on behalf of Virgin Atlantic, a customer, after Sir Richard Branson’s airline asked for a £500m bailout.

Airline bosses wrote to employees outlining the potential new salaries, and announced they are consulting unions over possible job cuts, with 4,700 jobs on the line.

Crew numbers could be nearly halved from 1,860 to 971 and main crew numbers risk being cut from 12,402 to 8,591 as the airline grapples to stay afloat amid strict travel restrictions.