Washington: An updated company analysis of AstraZeneca’s coronavirus vaccine shows that the two-shot regimen was robustly effective in clinical trials — 76 per cent at preventing symptomatic illness — according to a news release from the pharmaceutical company.

The finding released late on Wednesday (Thursday AEDT) is only slightly lower than results announced days earlier, underscoring the evidence that the vaccine being widely used by many countries appears to be a powerful tool to help end the pandemic. No severe cases of illness were reported in study volunteers who received the vaccine. Among people 65 and older, the vaccine was 85 per cent effective, the company reported. 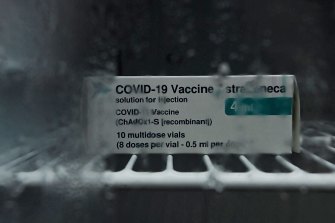 The updated results from US trials of AstraZeneca still show the drug is robustly effective against COVID-19 Credit:Kate Geraghty

The new data may not resolve challenges that the vaccine and the company face, because repeated missteps have sown confusion and distrust that may result in slower and closer scrutiny of the data.

AstraZeneca and Oxford’s announcement at the start of the week that their vaccine was 79 per cent effective in a 32,000-person trial in the United States buoyed the company’s stock price and impressed government officials.

Then, the fraught story of the vaccine took a dramatic turn when an independent data monitoring committee took the highly unusual step of writing late on Monday night (Tuesday AEDT) to company and government officials, airing concerns.

The expert physicians, biostatisticians and ethicists on the Data and Safety Monitoring Boards that oversee trials have an inside view of the research and are charged with maintaining patient safety and scientific validity. Their communications with companies typically take place in private.

But in the letter, the committee revealed that after several meetings and requests for more recent data, the company had chosen to present earlier, now-outdated data to the world that cast their vaccine in the most favourable light. The dispute was about whether the company had selected data to paint the most flattering picture of how effective the vaccine was, not about whether the vaccine worked.

“Decisions like this are what erode public trust in the scientific process,” the committee of outside experts wrote in the letter.

The National Institutes of Health issued a statement, urging the company and data committee to work together to “ensure the most accurate, up-to-date efficacy data be made public as quickly as possible”.

Dr Anthony Fauci, director of the National Institute of Allergy and Infectious Diseases, said in an interview after the statement was released that the irony of the situation was that the vaccine probably worked well. Many US scientists have watched the drama unfold with disbelief.

The data has not been published or peer-reviewed, but AstraZeneca said in its latest statement that the new analysis had been presented to an independent data board.

“The primary analysis is consistent with our previously released interim analysis, and confirms that our COVID-19 vaccine is highly effective in adults, including those aged 65 years and over,” Mene Pangalos, executive vice-president of biopharmaceuticals research and development at AstraZeneca, said in a statement. The company plans to submit an emergency use authorisation in the coming weeks, and is prepared to send out 30 million doses upon authorisation.

Before this week’s drama, AstraZeneca and Oxford had reported confusing results from a UK trial in the northern autumn. While the initial results were positive, with up to 90 per cent efficacy in one group of participants and 62 per cent in another, more details about how the trial had been conducted leaked out over days, turning a positive result into a hard-to-interpret mess and an ongoing news story.

Supply issues with the European Union have created further friction.

A rare blood clotting syndrome that resulted in some deaths caused the vaccination effort to be paused in some countries as experts explored whether there it may have been caused by the vaccine. Even as vaccination efforts have restarted, some regulators have said they could not rule out a possible link but found it to be unlikely.

The latest twist in the saga, a technical discussion over how effective the vaccine is in the US trial, doesn’t threaten the conclusion that the vaccine is effective. But it has become yet another avoidable challenge for the company. The vaccine still looks effective, but the reputational hit from the back and forth with the data committee could trickle down to undermine confidence in it.

Regulatory approval in the United States is a crucial event for the company, although it is increasingly uncertain whether or how the vaccine will fit into the portfolio as supply of other vaccines increases.

But the United States is not only a large market; its regulatory decisions are often a benchmark for the rest of the world.

“In spite of the drama, this is still a big win for global health,” David Benkeser, a biostatistician at the Emory University Rollins School of Public Health, said in an email.

Although other countries have already authorised the vaccine, a positive US decision could help fuel global uptake. Because AstraZeneca has vowed to sell its vaccine with no profit in low- and middle-income countries, even after the pandemic is over, the US market also represents one of the major opportunities for the company to make a profit.