The online brokerage Robinhood has taken out a full-page ad in the New York Times saying that it is ‘humbled’ after recent controversy over its limits on buying certain stocks during the ‘meme stock’ frenzy fueled by an army of small investors on Reddit.

The ad on Tuesday follows massive backlash against the popular trading app, which at one point last week restricted the purchase of 50 different stocks as it struggled to meet capital requirements.

Shares of GameStop, the struggling video game retailer that was the focus of a buying campaign on the Reddit forum WallStreetBets, slid another 40 percent in early trading on Tuesday, signaling that the staggering rally might be at an end. It has risen as much as 1,600 percent over the past month.

AMC, another target of the campaign, dropped another 30 percent on Tuesday. Spot silver prices were also down, after media reports claimed small investors were targeting the commodity, which had risen sharply in recent days, something that was denied by users of WallStreetBets. 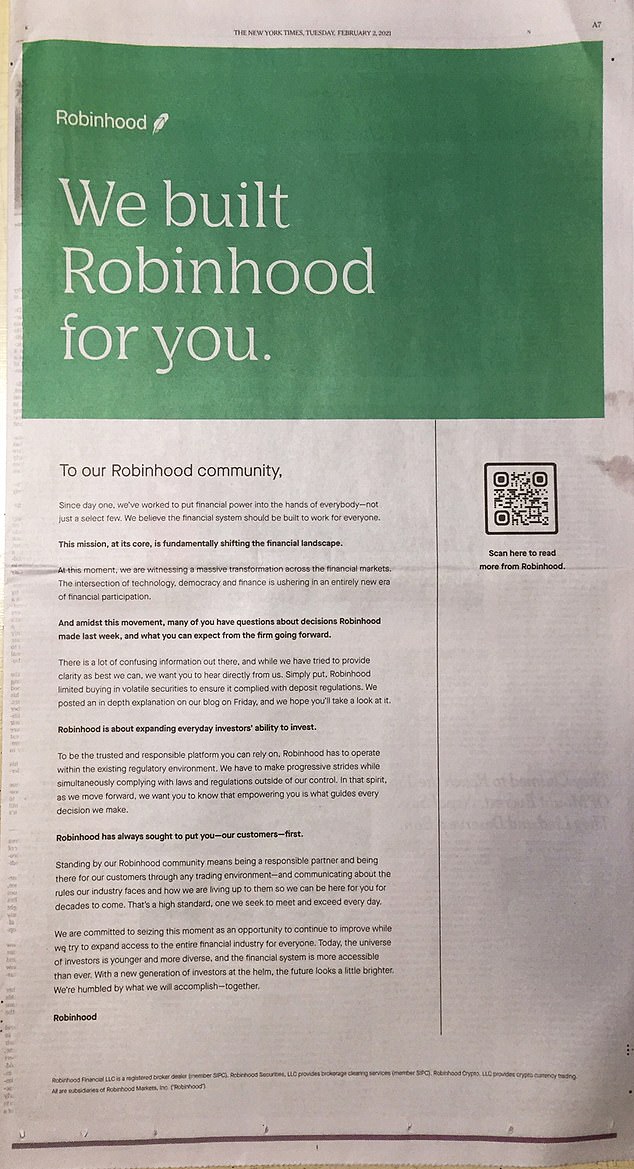 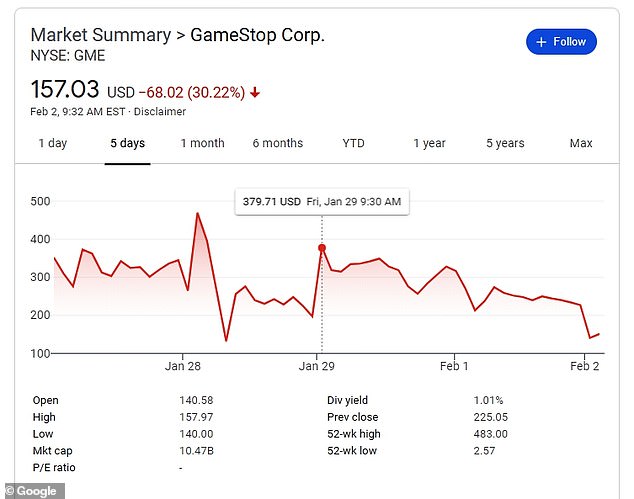 Shares of GameStop, the struggling video game retailer that was the focus of a buying campaign on the Reddit forum WallStreetBets, slid another 40 percent in pre-market trading

On Tuesday morning, Robinhood had significantly relaxed its trading restrictions, imposing buying limits on the shares of just eight companies.

GameStop stock remained the most restricted on the platform, with users able to accumulate up to 20 shares, if they didn’t already own more.

Last week, Robinhood was the target of ‘conspiracy theories’ accusing the brokerage of colluding with hedge funds that had bet against GameStop to drive down the share price by limiting purchases.

But over the weekend, the company explained that, amid the buying frenzy, it had struggled to meet the deposit requirements from the main clearinghouse used to execute stock trades, and put the emergency restrictions in place as its cash reserves were stretched to the limit.

The company’s explanation was backed up by outside experts who understand the strict regulations on brokers and complicated workings behind the scenes of trading stock.

‘Simply put, the retail brokerages experienced unprecedented trading activity and concentration in certain stocks that at the same time were undergoing extreme volatility,’ analysts at JMP Group wrote in a research note obtained by DailyMail.com.

‘We estimate Robinhood was the most active in the market last week being the firm most associated with the surge in retail brokerage engagement… This pushed the company to bring in additional capital per press reports but also to selectively limit new activity that would continue to drive future capital needs higher,’ they added. 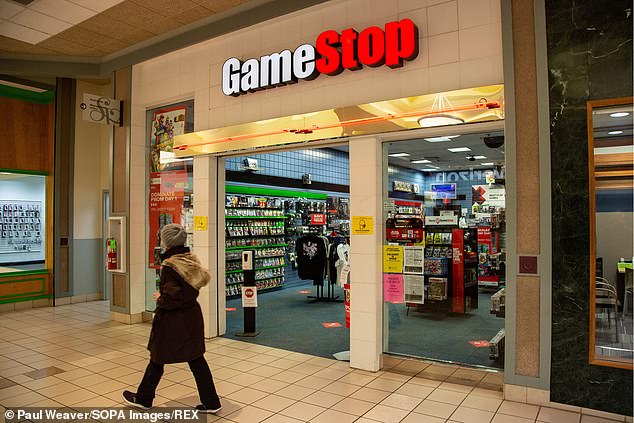 A woman walks past the GameStop store inside the Susquehanna Valley Mall last week. GameStop stock was the target of a small-investor buying frenzy last week

In their full-page ad on Tuesday, Robinhood said that it is working to ‘put financial power in the hands of everybody — not just a select few.’

‘We are committed to seizing this moment as an opportunity to continue to improve while we try to expand access to the entire financial industry for everyone,’ the ad read.

It came as Robinhood CEO Vlad Tenev is likely to be dragged in front of a Congressional committee to explain his company’s actions amid the GameStop frenzy, which saw the stock rally more than 1,600 percent in January.

Rep. Maxine Waters, the California Democrat who is the powerful head of the House Financial Services Committee, is likely to call Tenev on February 18, Politico reported, citing sources close to the matter.

Waters had said on MSNBC this weekend: ‘I am concerned about whether or not Robinhood restricted the trading because there was collusion between Robinhood and some of the hedge funds that were involved with this.’

Senate Banking Chairman Sherrod Brown, an Ohio Democrat, had previously pledged to hold a hearing on the matter. 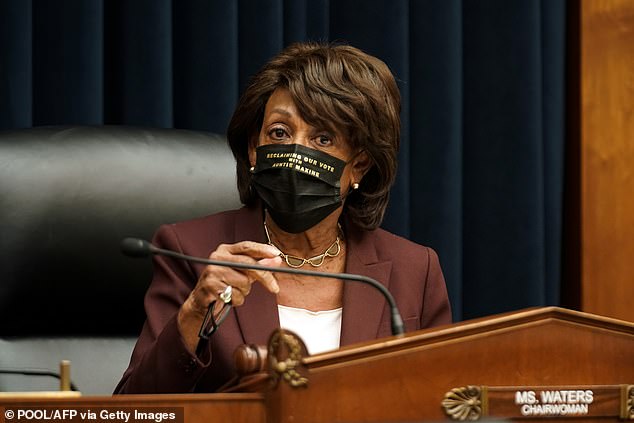 Rep. Maxine Waters, the California Democrat who is the powerful head of the House Financial Services Committee, is likely to call Robinhood CEO Vlad Tenev on February 18

GameStop shares sank again on Tuesday as the Reddit-driven trading frenzy that has shocked global financial markets over the past week started to show signs of fizzling out.

Spot silver prices, an alternative focus in the battle between a pack of small traders and Wall Street hedge funds since late last week, fell after hitting an eight-year high a day earlier.

Analysts said the silver pullback may show the limits of small investors’ impact in a large market, while posts on the popular Reddit forum WallStreetBets expressed concern that silver buying could cost traders their grip on some stocks.

‘The stocks side of things has faded because they all had a look at silver yesterday, but my feeling is they’ll be back, depending on whether retail trading platforms will allow you to buy more than one share,’ Keith Temperton, an equity sales trader at Forte Securities, told Reuters.

Another Reddit favorite, movie theater operator AMC, also slumped although it remains some 500 percent higher than the start of the year, before the organized band of small buyers piled in and forced a ‘squeeze’ that required big funds to close short positions by buying shares at very high prices. 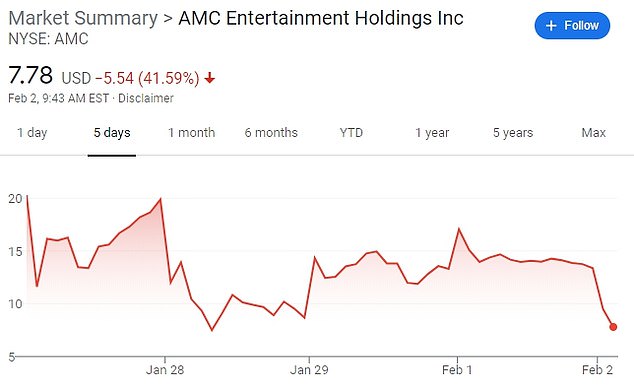 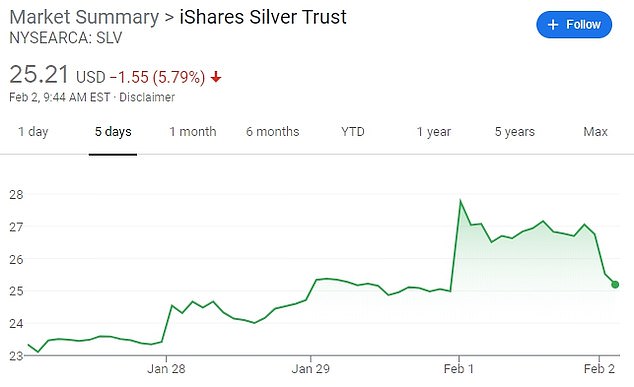 Spot silver prices, an alternative focus in the battle between a pack of small traders and Wall Street hedge funds since late last week, fell after hitting an eight-year high

Robinhood, where much of the buying and selling has taken place, confirmed on Monday it had raised another $2.4 billion from shareholders following a $1 billion boost last week as it strives to meet demands for additional collateral to cover trades.

The broker has also held talks with banks about raising another $1 billion in debt, people familiar with the matter told Reuters.

Analysts at financial institutions continued to predict the action was likely to fade, it was just a question of how soon.

‘With volumes in all the hot stocks collapsing, silver attack met by margin, Robinhood having to seek fresh collateral at a rampant speed, the signals that the retail mania could unravel rapidly are aligning,’ Mark Taylor, a London-based equity sales trader with financial group Mirabaud, told Reuters.