Full of the festive spirit! Revellers brave the bad weather to enjoy a pre-Christmas night on the tiles as party season gets well and truly underway

Festive revellers did not let the cold and rain put them off as they hit the town for a night out just ten days before Christmas on Saturday.

Cheerful party-goers in Glasgow and Manchester braved the winter weather with bare legs, some of them sporting furry coats over their tops and dresses.

Some of the revellers added a festive theme to their outfits, with two men spotted in Christmas jumpers and another wearing a Santa hat as he enjoyed a takeaway.

Others in the English and Scottish cities were willing to join lengthy queues for their favourite bars and clubs, refusing to miss out on the penultimate party weekend before December 25.

Police officers were also out in the cold to keep order on the streets, which were decorated with festive trees and Christmas lights.

Storm Deirdre battered the country on Saturday and brought heavy snow, freezing rain and gales, causing havoc on the roads and misery on the high street for retailers hoping for a festive sales boost. 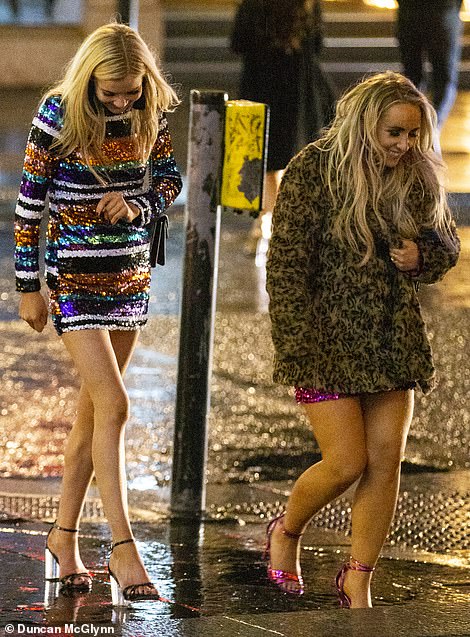 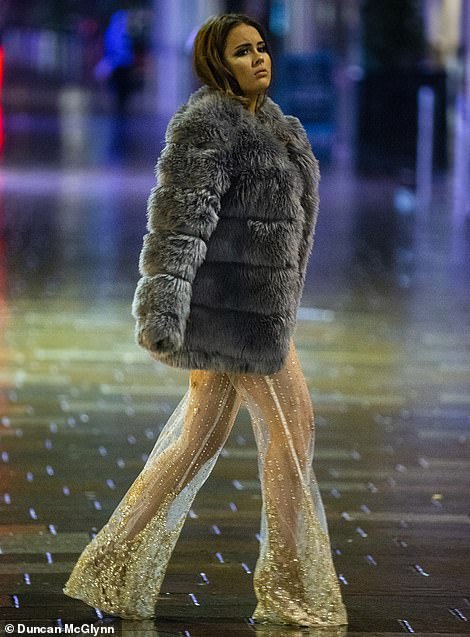 Keen revellers: Three women brave the cold as they enjoy a night out in Glasgow on Saturday just 10 days before Christmas 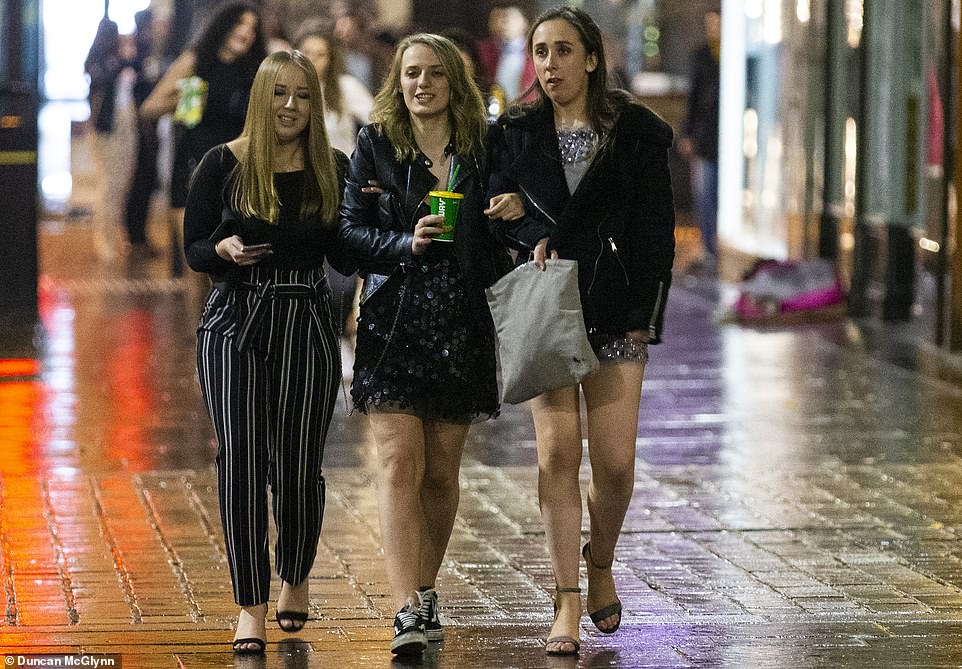 Enjoying the party: A woman holds a drink from Subway as she and two friends enjoy themselves despite the cold weather 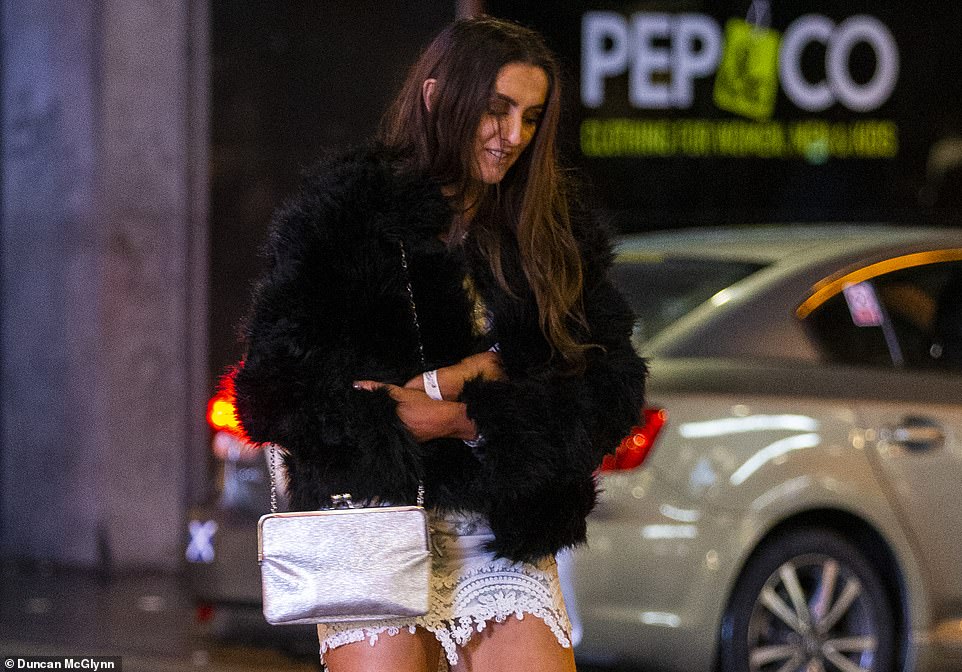 Dressed for the occasion: A partygoer wears furry coats over her outfit to keep warm on a cold and rainy Glasgow night 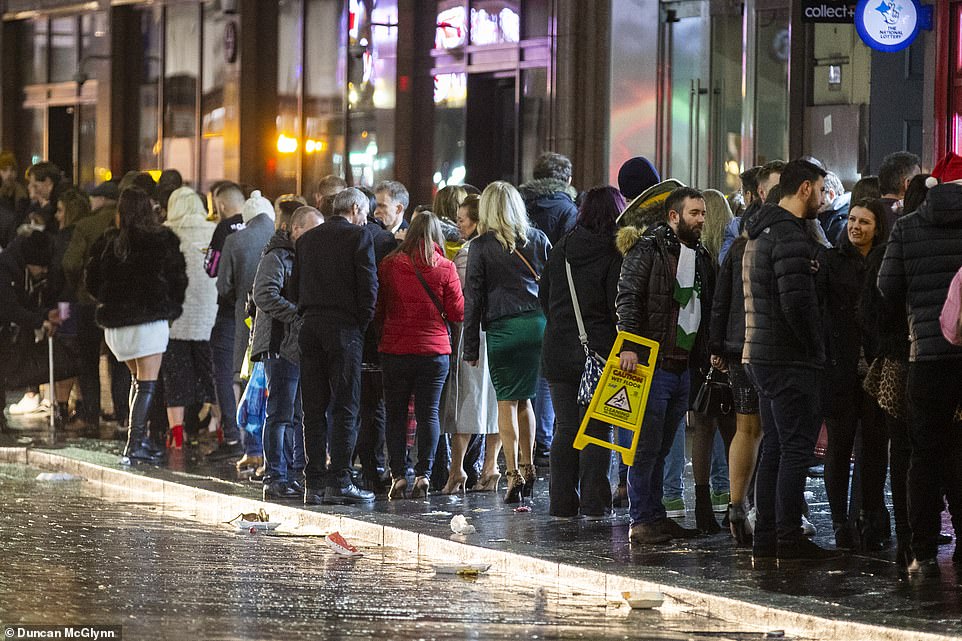 Hardy crowd: Revellers wearing coats and anoraks join a queue in Glasgow city centre on a rainy Saturday night out 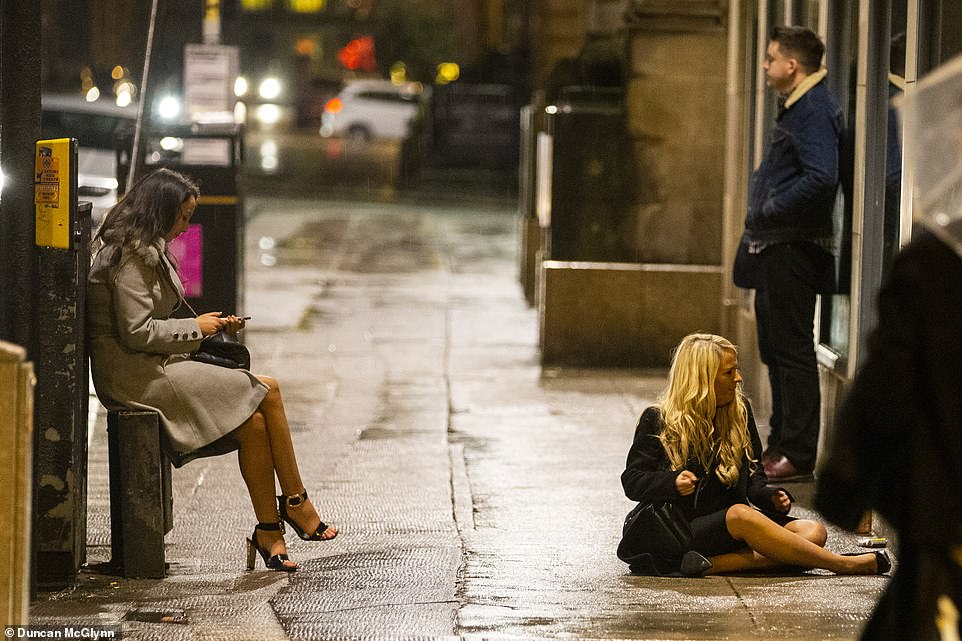 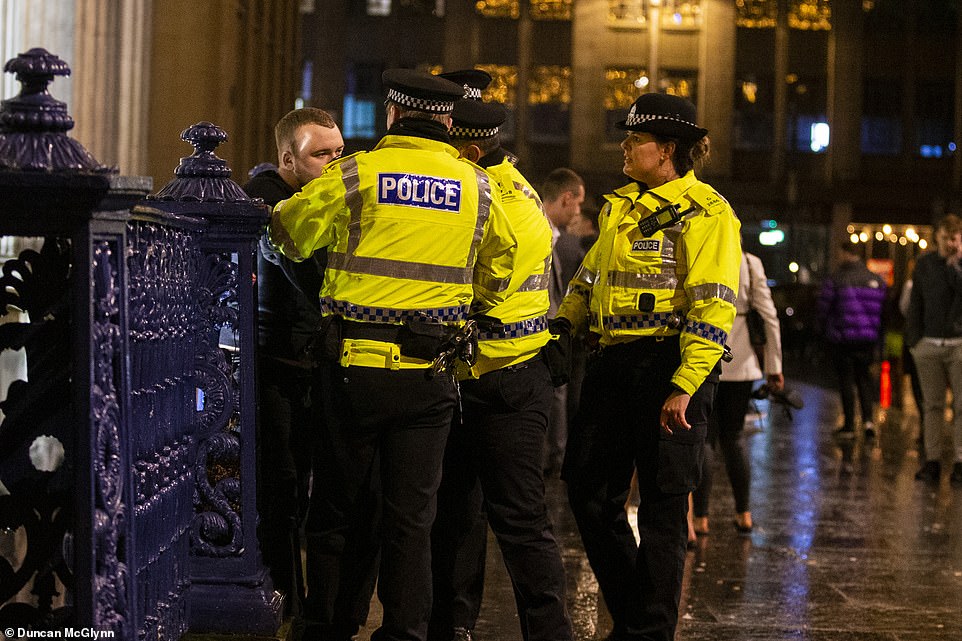 Law and order: Four police officers speak to a man in Glasgow city centre as they oversee revellers in the Scottish city 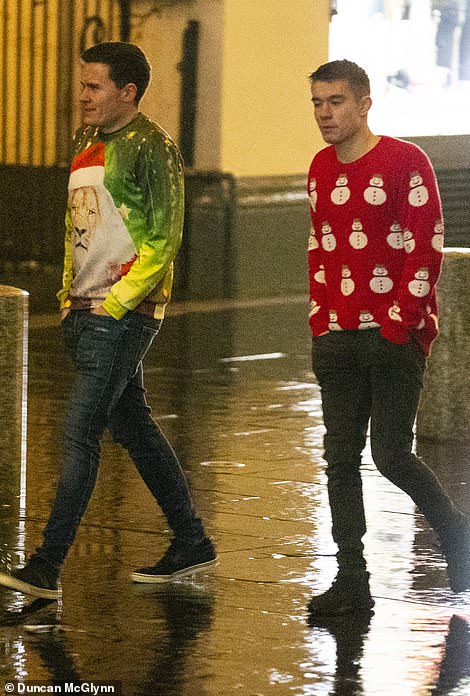 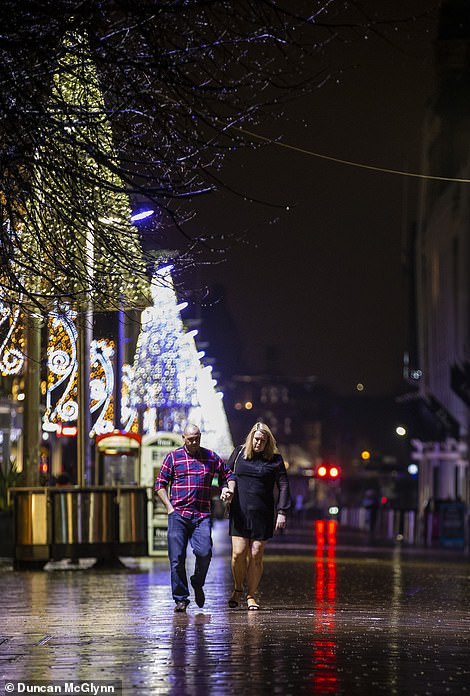 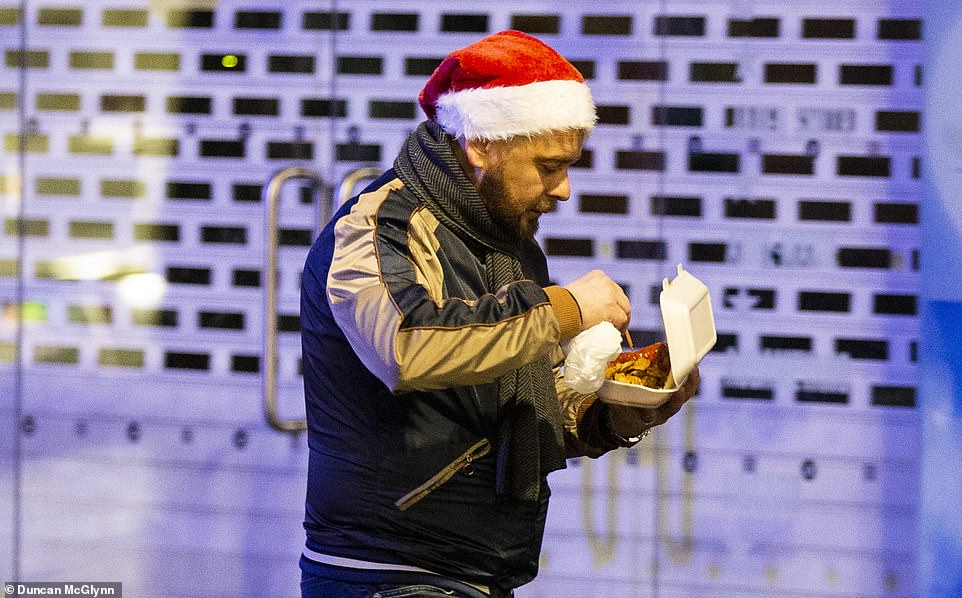 Refreshment: A man wearing a coat and Santa hat enjoys a takeaway in the centre of Glasgow on Saturday evening 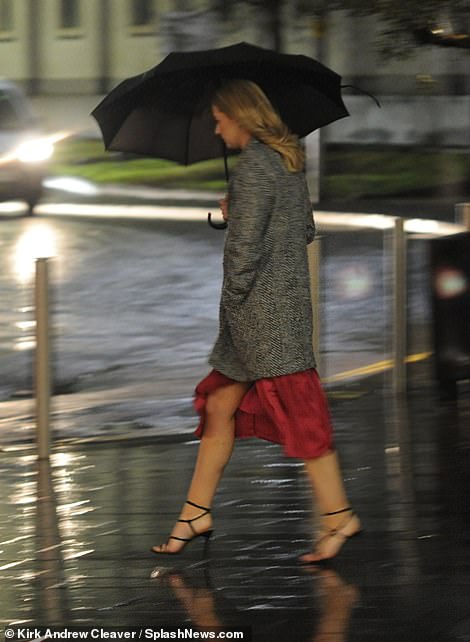 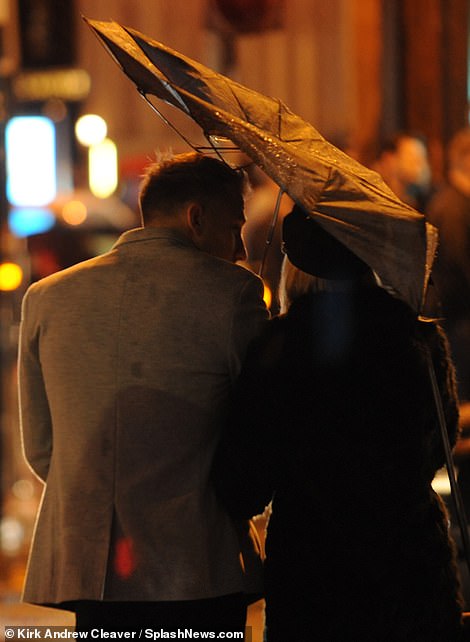 Taking shelter: One woman holds up an umbrella in Manchester while another couple struggle to put theirs to use in the wind 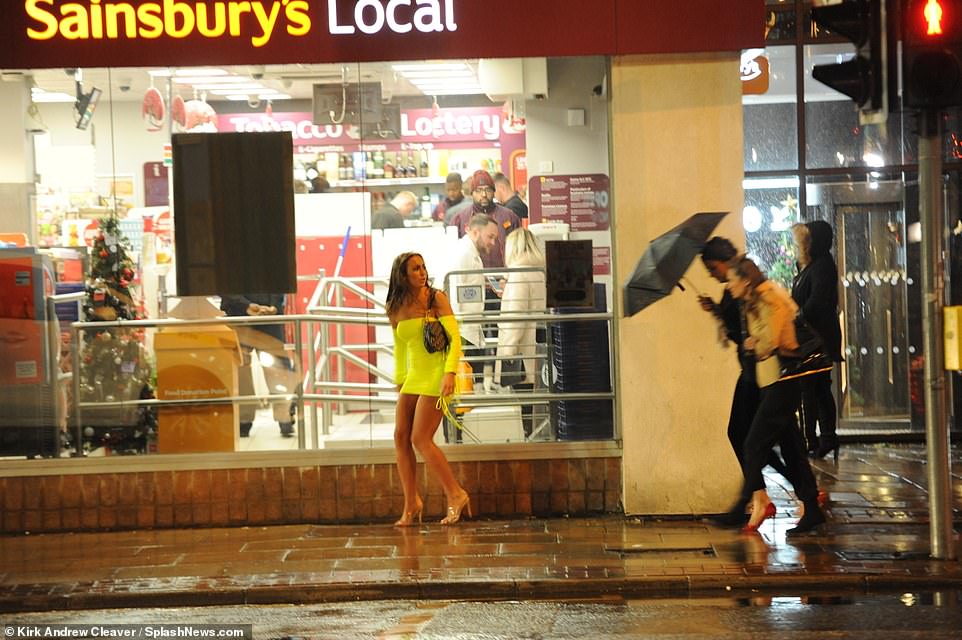 Come on! A woman wearing a yellow dress waits for her friends outside a Sainsbury’s in Manchester on Saturday night 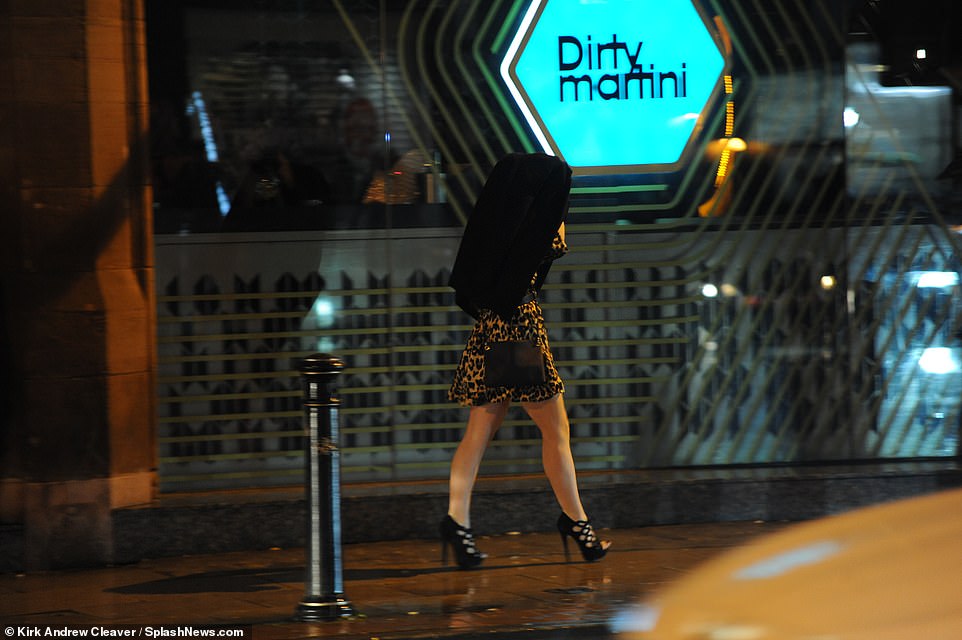 Taking cover: One reveller wearing heels and a leopard-print dress holds her coat over her head to keep dry in Manchester 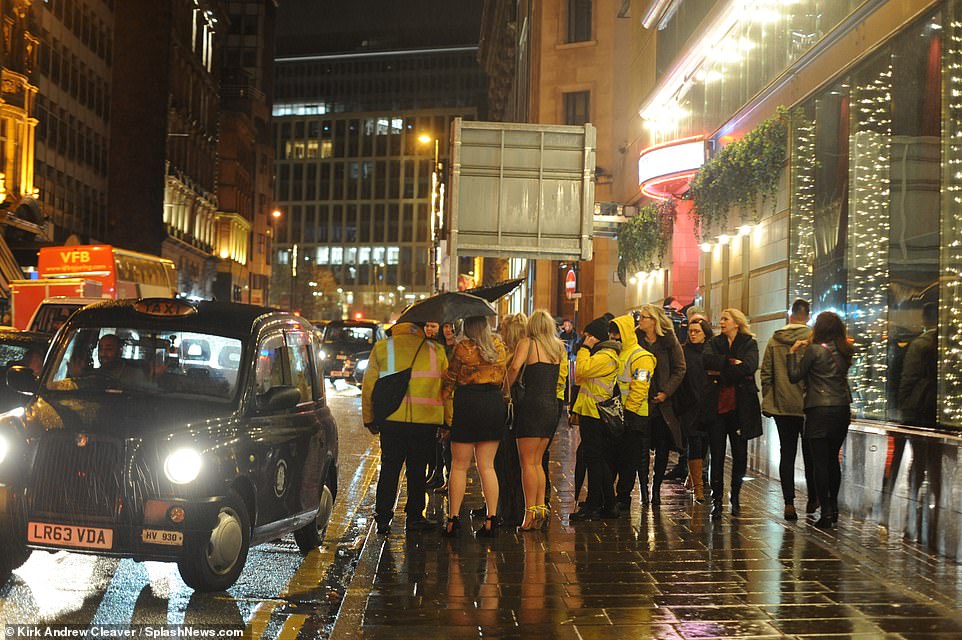 Getting away: Two taxis arrive in a Manchester street ready to pick up revellers sheltering from the rain and wind last night 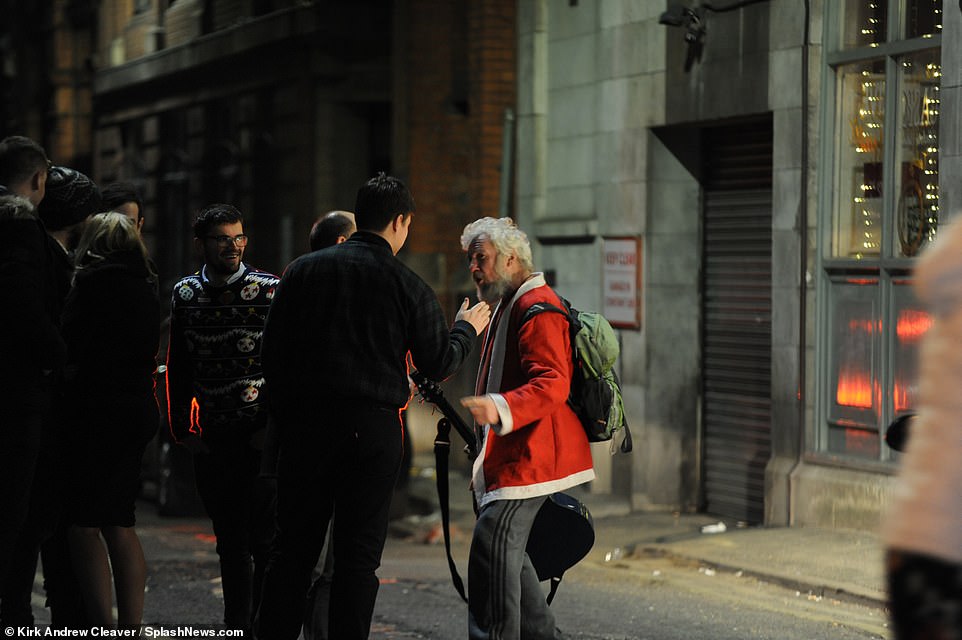 Look here, Santa: A man with a festive red coat and white hair holds a guitar and speaks to another reveller in Manchester 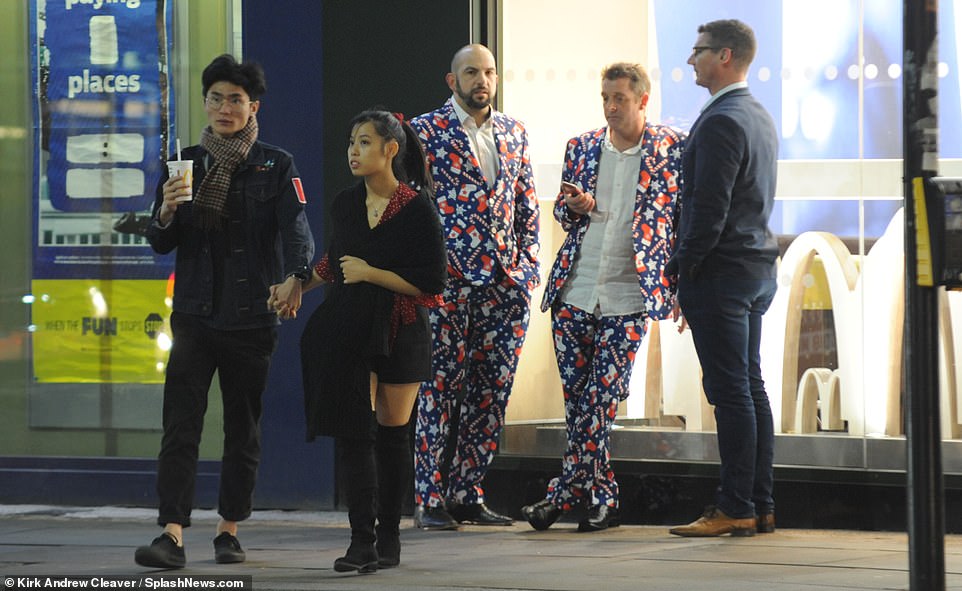