London: British ministers secretly allowed AstraZeneca to use its UK supply chain to produce COVID-19 vaccines for Australia in return for access to millions of doses from India.

In a move that is likely to intensify Britain’s vaccine row with the EU, multiple sources have said that the Anglo-Swedish firm was given dispensation to use its domestic manufacturing capacity to produce at least 717,000 jabs for Australia, one of Britain’s closest allies. 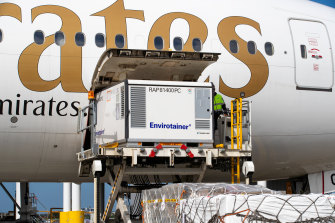 The first shipment of AstraZeneca COVID-19 vaccine is removed from the Emirates airlines plane at Sydney International airport on February 28.Credit:Getty Images

At least two deliveries were made to Australia in February and March – a period when Brussels had begun imposing vaccine export controls and demanding that the UK divert some of its supply to the bloc to make up for a shortfall from AstraZeneca.

The British government has repeatedly rejected the requests, while the company’s British contract is said to contain clauses preventing it from shipping UK-manufactured doses to the EU.

However, despite the UK’s arrangements being steeped in secrecy, the London Telegraph has been told that earlier this year AstraZeneca was granted permission to export to Australia.

In exchange, Britain gained access to up to 10 million doses produced by the Serum Institute of India, the world’s largest vaccine manufacturer and a producer of the AstraZeneca jab. 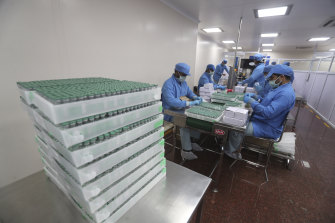 This was deemed acceptable because the UK contract is said to enable the company to make up any shortfall in its domestic supply by procuring doses from its other plants overseas.

According to those with knowledge of the agreement, it also meant that Australia secured an earlier supply of vaccines, while the UK continued to receive the number of doses it needed to meet its targets.

It did not alter the total number of vaccines the UK is due to receive from AstraZeneca, which still stands at 100 million.

The UK received 5 million of the Indian jabs in March, although it is now thought to be increasingly unlikely that India will agree to export the remaining half at a time when it is experiencing more than 350,000 new infections per day.

It remains unclear whether Australia is the only country to benefit from such an arrangement, with officials from both the UK and Australian governments refusing to comment on the grounds that the issue is “highly sensitive”.

However, Boris Johnson has confirmed that the UK will share the majority of any future surplus coronavirus vaccines with Covax, the international supply scheme which aims to help poorer nations get access to jabs.

The UK has placed orders with multiple vaccine producers for 517 million doses, enough to provide three doses to the entire population two and a half times over.

The disclosure of the UK-Australia arrangement is likely to enrage figures in the European Commission, which is currently suing the company in Brussels over supply delays, which it claims are in breach of contract.

The company strongly denies this, arguing that its agreement with Brussels stipulates that it must make its “best efforts” to meet the order.

On Wednesday, EU lawyers also repeated their demands, first made in January, for AstraZeneca to begin exporting UK manufactured vaccines to Europe.

The bloc asserts that the inclusion of two UK plants in its contract means that the company is required to comply. However, AstraZeneca says that it has no obligation to do so.

The first details of the Australia deal emerged on April 8, when The Sydney Morning Herald and The Age reported that 717,000 UK-manufactured doses had been flown to the country from Britain.

The first batch of 300,000 doses landed at Sydney Airport on February 28, with a further large delivery on an Emirates passenger plane in March.

It came several weeks after the European Commission adopted curbs on the export of vaccines produced in the EU.

The second came after Brussels formally blocked an application by AstraZeneca to ship 250,000 doses to Australia from Italy.

A UK government spokesman said: “Producing vaccines is an international endeavour and the UK is proud to play a leading role in the global effort to develop and distribute COVID-19 vaccines.

“The details of any commercial vaccine supply agreement between national governments and AstraZeneca are commercially sensitive and a matter for the two parties.”