Their biggest mission yet: How 96 Queen’s Colour Squadron gunners – one for each of Her Majesty’s 96 years – flew with her coffin on RAF transport plane used in Kabul and to fly arms to Ukraine… and its tail number even reads LLIZZ in her honour

The ceremonial guard who transferred the Queen’s coffin from their military jet last night embarked on their most important mission to date after accompanying the monarch’s body on her final flight before she is laid to rest.

Pallbearers from the Queen’s Colour Squadron, a unit formed in 1960 that provides safe escort to the Colour, took up their place in history as they carried the body of their Commander-in-Chief to the state hearse ahead of her period of lying in state at Westminster Hall.

Bearing the oak coffin, still draped in the rich colours of the Royal Standard, the squadron solemnly marched in silence with the eyes of the world, and senior royals and politicians, watching them at RAF Northolt yesterday.

Those braving lashes of rain when the jet’s wheels touched down at around 7pm included Prime Minister Liz Truss, Defence Secretary Ben Wallace and a reflective Princess Anne, who was seen departing the RAF C-17 Globemaster which carried the Queen’s coffin from her beloved Scotland.

On parade was a guard of honour made up of service personnel from the Queen’s Colour Squadron – a unit with deeply entrenched ties to the Crown as an official ceremonial guard – who presented arms when the coffin was first seen. The King’s Colour for the RAF was lowered in salute.

More than six million people had tried tracking the flight which was greeted by three officers and 96 non-commissioned gunners, poignantly used to mark each year of the late monarch’s extraordinary life, who had assembled on the airfield shortly before the plane landed following a short flight from Edinburgh. 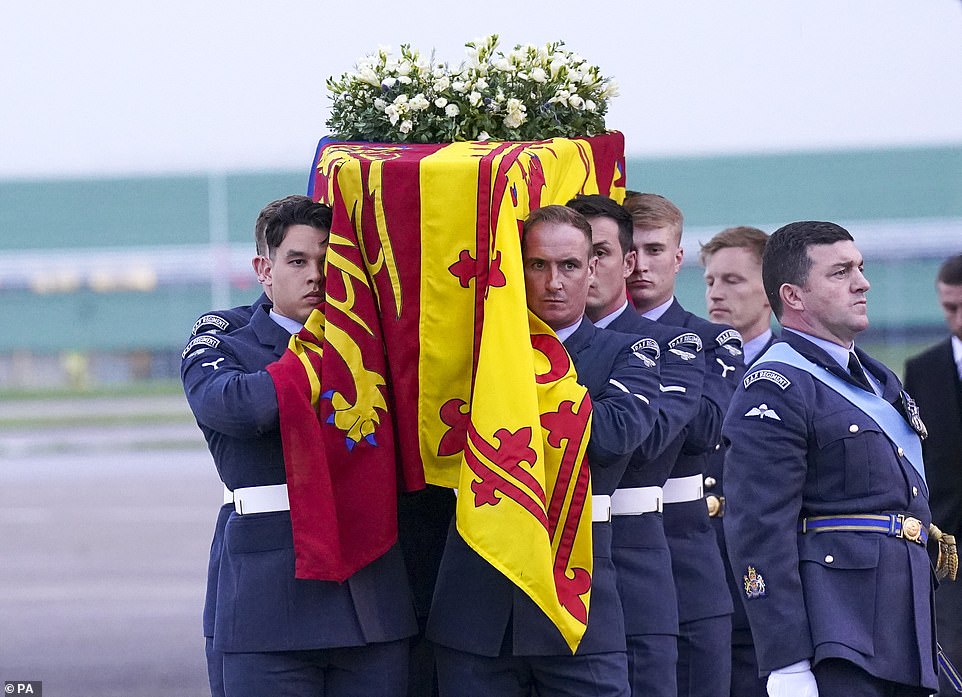 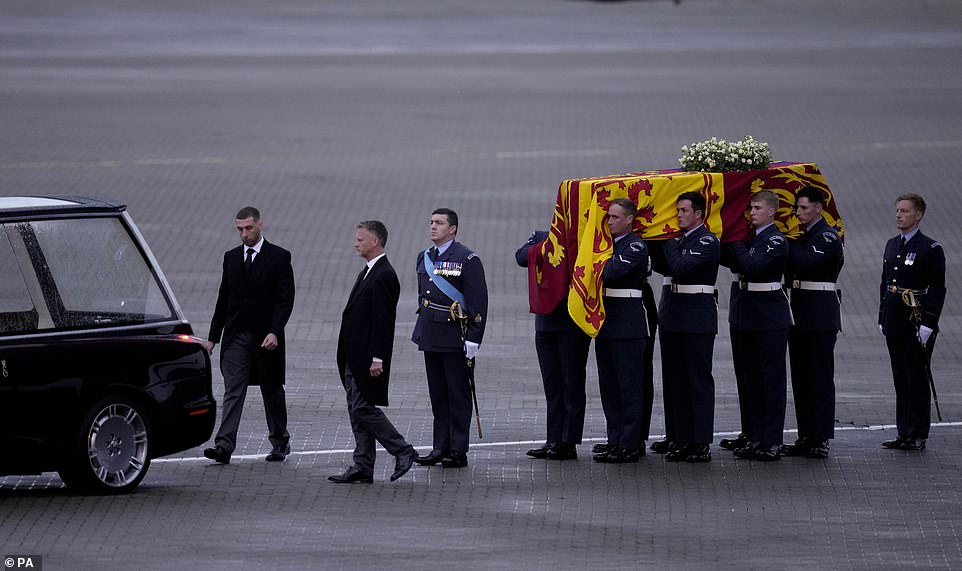 Pallbearers from the Queen’s Colour Squadron, a ceremonial unit formed in 1960 that provides safe escort to the Colour, carried the body of their Commander-in-Chief to the state hearse ahead of her period of lying in state at Westminster Hall 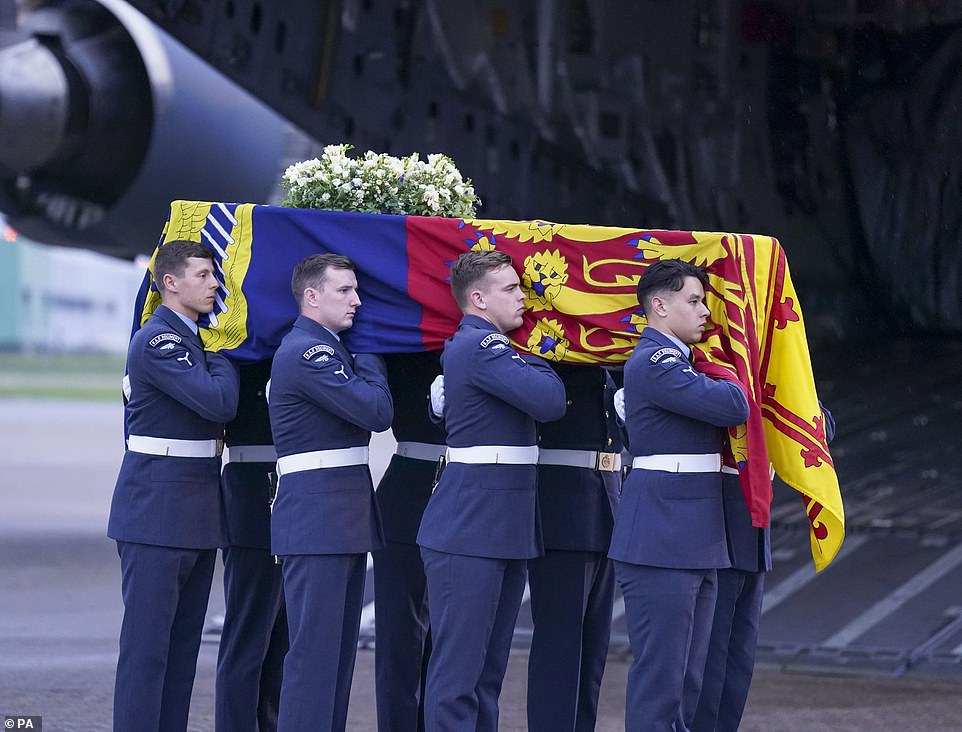 Bearing the oak coffin, still draped in the rich colours of the Royal Standard, the squadron solemnly marched in silence with the eyes of the world, and senior royals and politicians, watching them at RAF Northolt yesterday 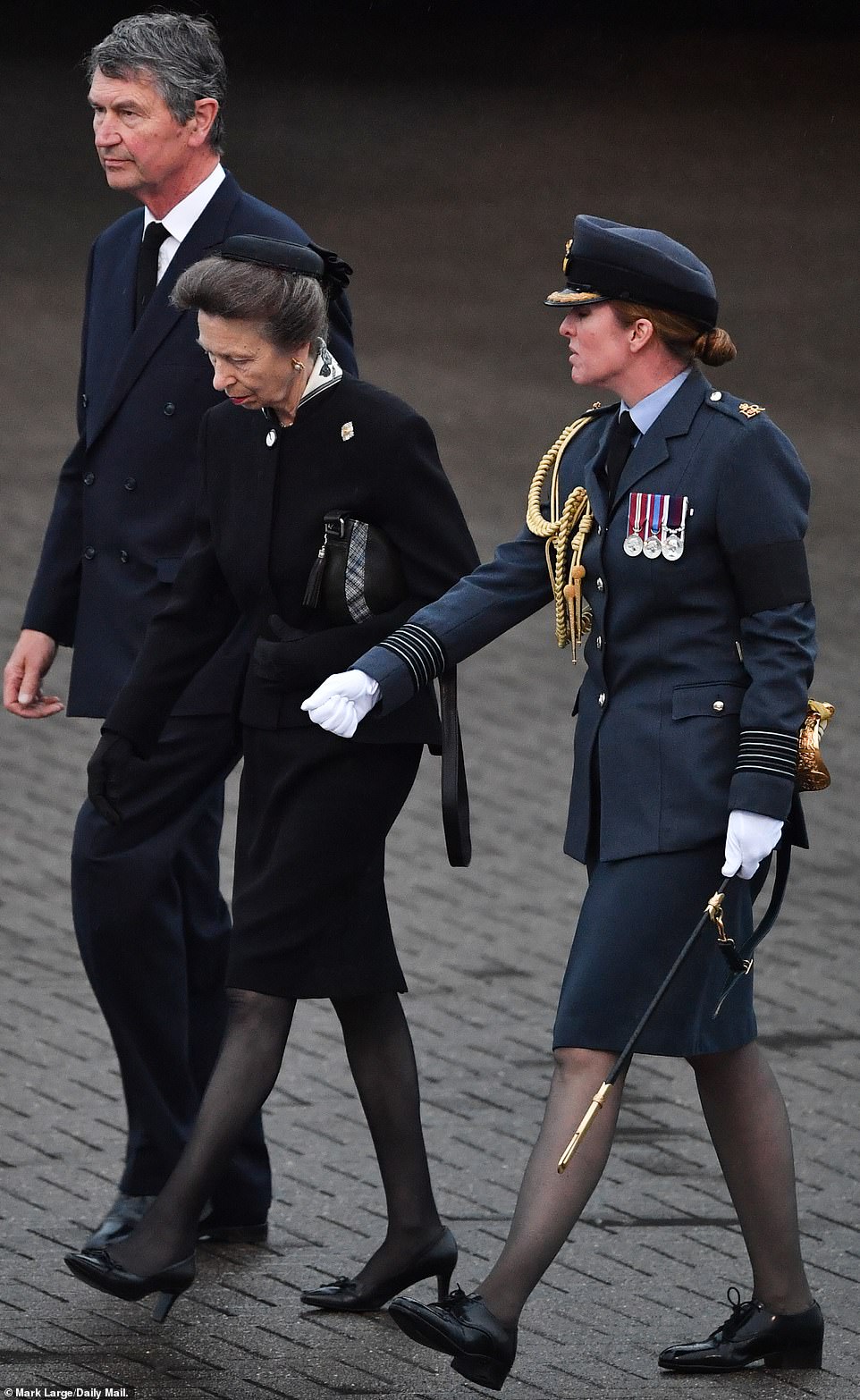 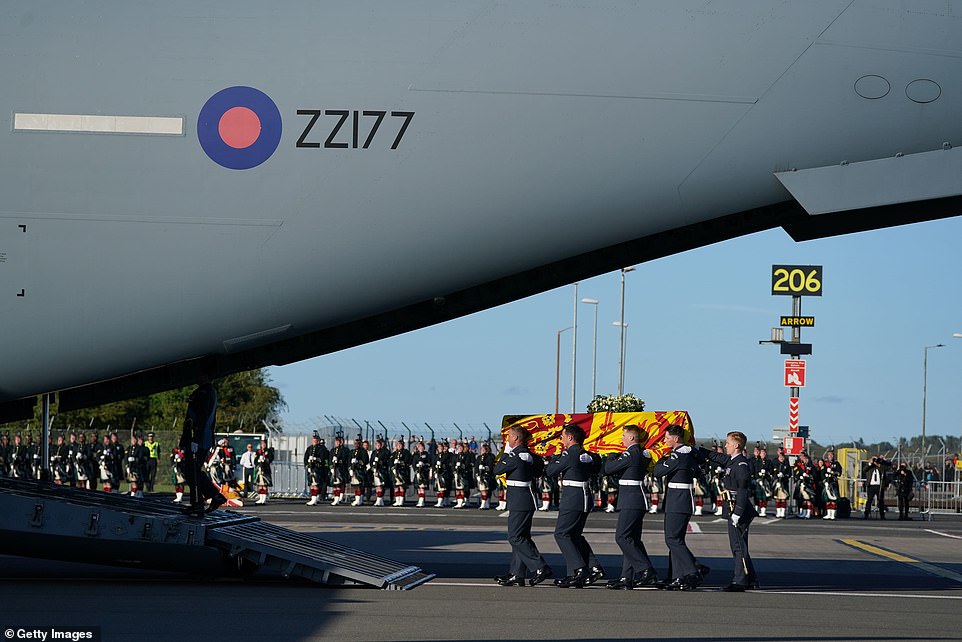 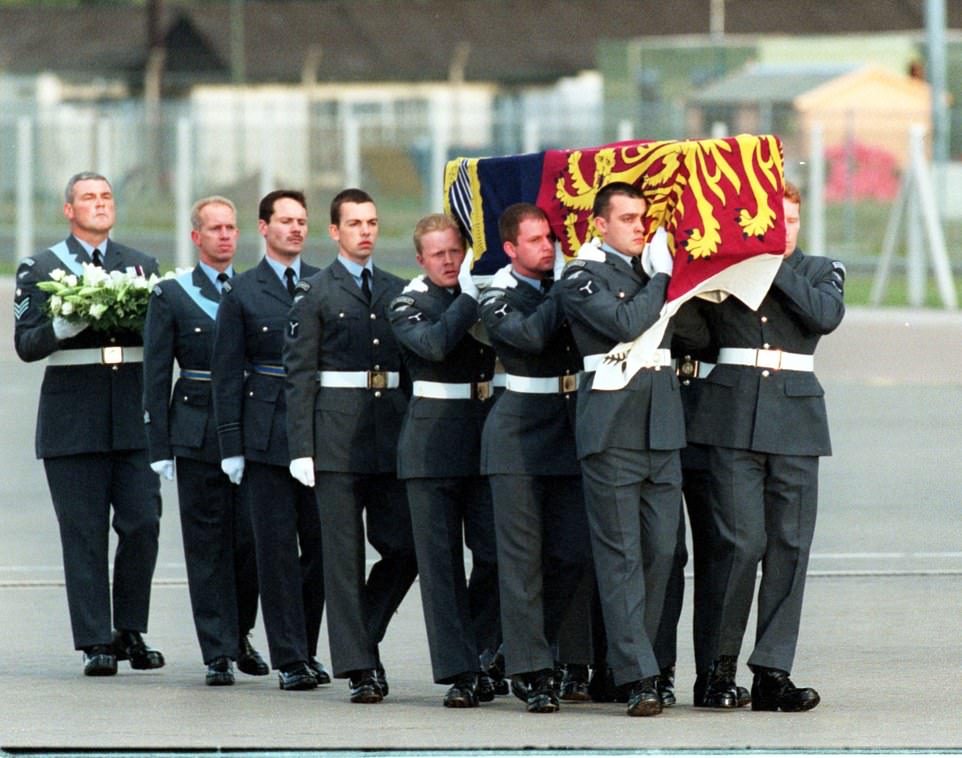 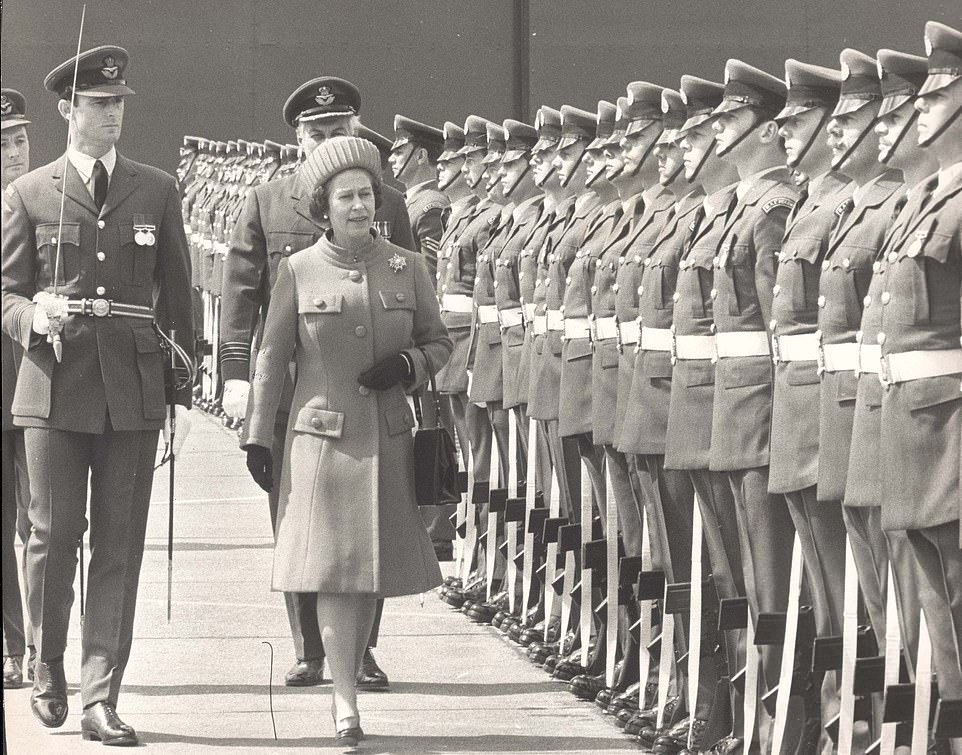 1974: Queen Elizabeth II inspects a guard of honour of the Queen’s Colour Squadron at RAF Finningley 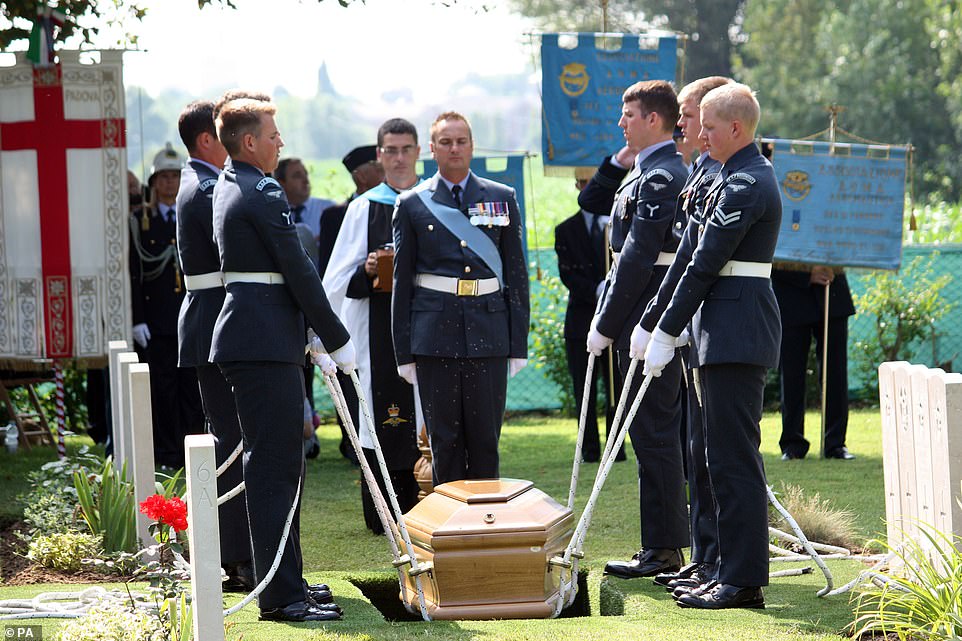 2013: Members of the Queen’s Colour Squadron lay to rest the remains of the crew of Boston BZ590 at the Padua War Cemetery, Italy 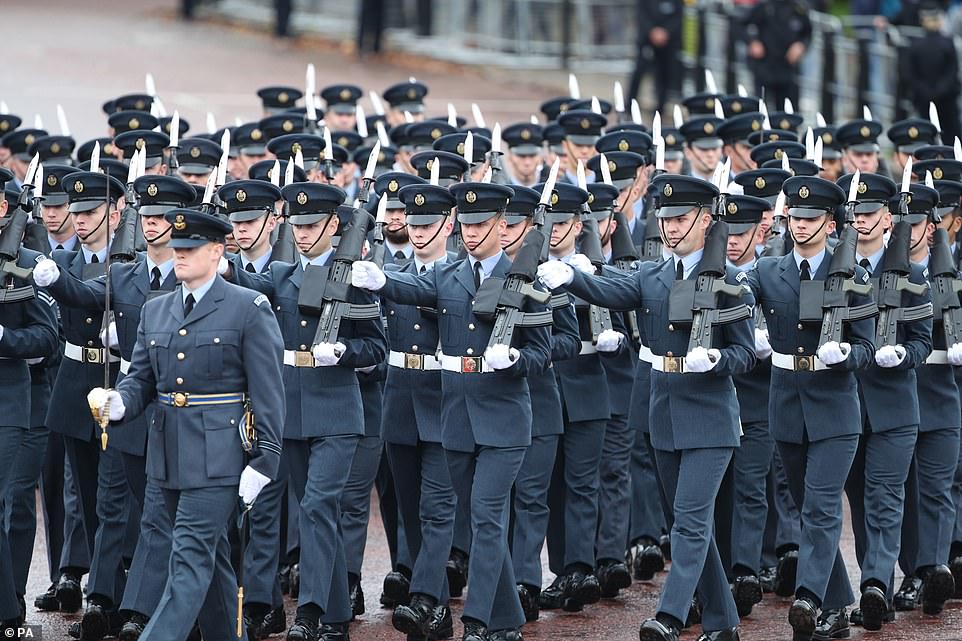 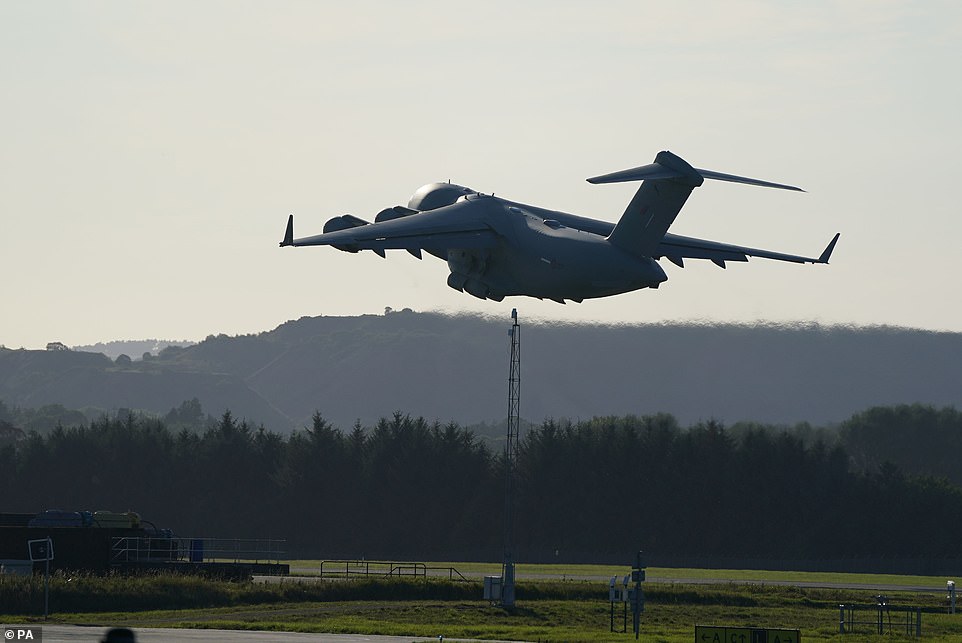 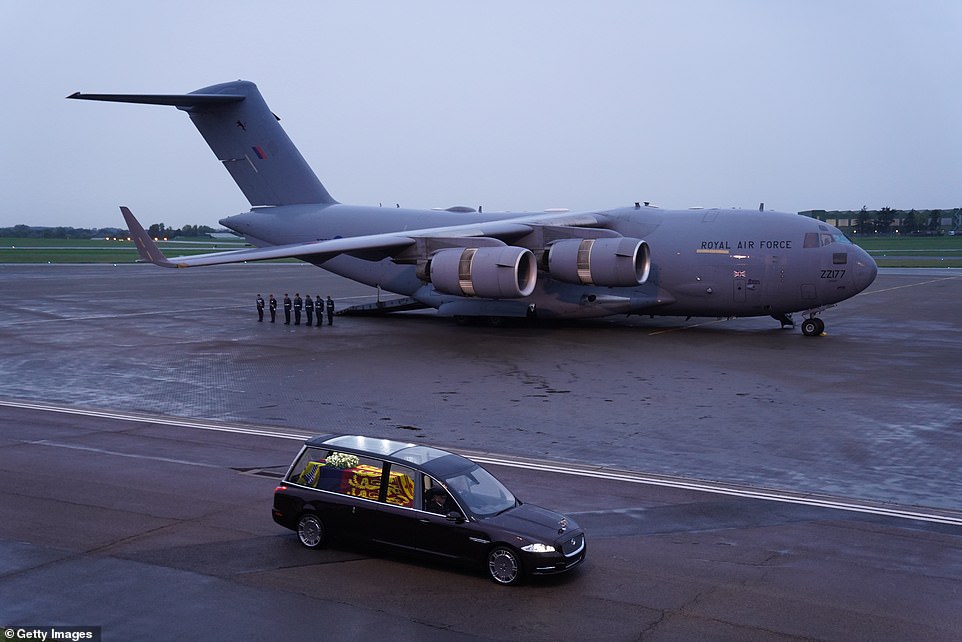 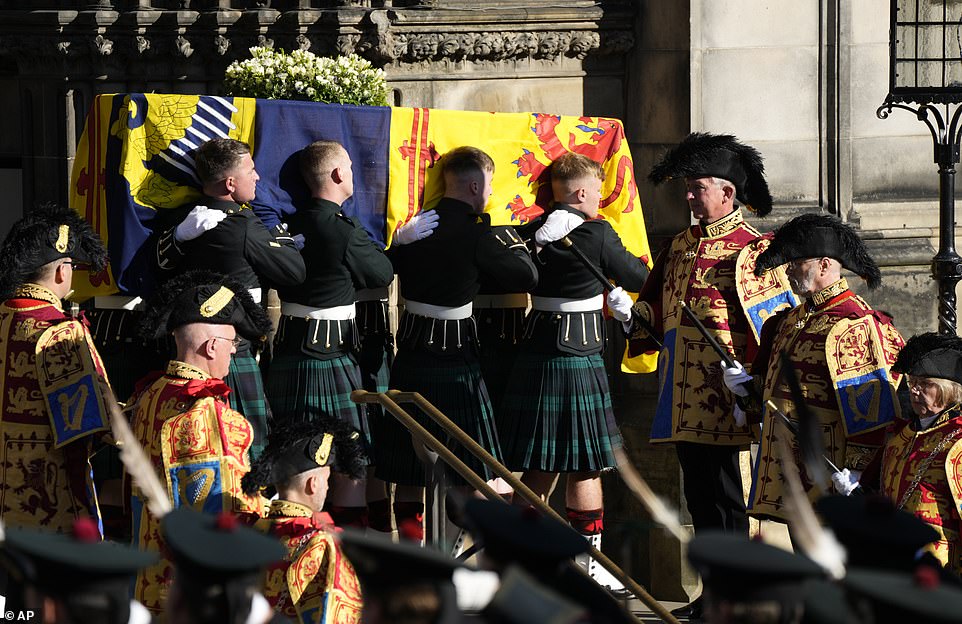 An historic regiment that has served for more than six decades, the Queen’s Colour squadron (QCS) is the RAF’s dedicated ceremonial unit, responsible for representing the force at both state and national ceremonies and providing guards of honour for the Royal Family and world leaders.

Consisting of officers and gunners from 64 Squadron of the RAF regiment, the unit’s traditional role is to oversee the safekeeping of the royal colours and are officially responsible for the ceremonial repatriation of senior royals.

On several occasions, they have mounted the guard at Buckingham Palace, Windsor Castle and the Tower of London.

The QCS also plays a leading role in the State Opening of Parliament, the annual Remembrance Service at the Cenotaph. This year, they were in attendance for the Queen’s Platinum Jubilee as they escorted the Colour.

Officers were also tasked with the safe transport of the coffin carrying Princess Diana from Paris following her death in 1997, and at one point led the memorial service to Prince Philip last April.

And in 2003 the QCS carried the coffin bearing the remains of Second World War Wing Commander Adrian Warburton ahead of his funeral in Duernbach, southern Germany after his remains were uncovered following his final mission in Bavaria in 1944.

It was later revealed that the C-17 Globemaster carrying the Queen’s oak coffin also has a storied past as it played a crucial part in the evacuation of Kabul last year and also in dropping off aid to Ukraine after Russia’s brutal invasion.

The head of the RAF, said the aircraft evacuated thousands of people fleeing the Taliban in Kabul last summer, flew humanitarian and lethal aid to Ukraine and helped ‘extensively’ in disaster relief efforts around the world.

Air Chief Marshal Sir Mike Wigston told Sky News: ‘It’s a C-17 Globemaster, which is our strategic airlifter. But on this very sad occasion it will be carrying Her Majesty’s coffin down from Edinburgh to RAF Northolt.

The plane which carried the Queen’s coffin from Edinburgh to London last night was the world’s most-tracked flight, it has been revealed.

Flightradar24 said six million people attempted to click on the flight on its website within a minute as the C-17 Globemaster aircraft prepared to take off on Tuesday.

This caused ‘unprecedented strain’, according to the company, and caused the website to crash. 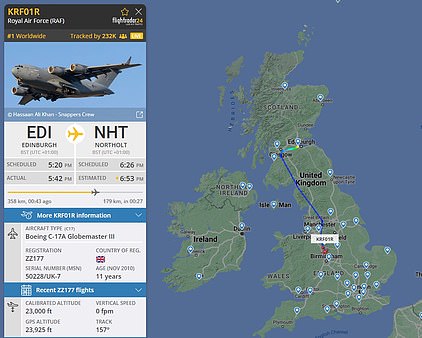 Flightradar24 said it had ‘implemented a number of traffic calming measures’ before the flight as it ‘expected a large influx of users’, but the ‘immediate, massive spike was beyond what we had anticipated’.

The previous record for a flight was set last month when 2.2 million people tracked a plane carrying US politician Nancy Pelosi to Taiwan.

Flightradar24 said: ‘Even though our platform suffered under such heavy load, Queen Elizabeth II’s final flight from Edinburgh to RAF Northolt is by far the all-time most-tracked flight on Flightradar24 and will likely remain at the top for a long while.’

‘It’s a heavily used aircraft – it carried the majority of the 15,000 people that we evacuated from Kabul last summer.

‘And, since then, it’s been involved in airlifting humanitarian aid and lethal aid nodes to support Ukraine.’

The aircraft had the callsign ‘Kittyhawk’, used for any military flight with the Queen on board. The Princess Royal accompanied the coffin on the flight with her husband Vice Admiral Sir Tim Laurence.

Anne said she was ‘fortunate’ to be able to share ‘the last 24 hours of my dearest mother’s life’, adding: ‘It has been an honour and a privilege to accompany her on her final journeys.

‘Witnessing the love and respect shown by so many on these journeys has been both humbling and uplifting.

‘We will all share unique memories. I offer my thanks to each and every one who share our sense of loss.’

The plane’s tail number, ZZ177, can also read LLIZZ when flipped upside down, another subtle tribute to the extraordinary life of Britain’s longest reigning monarch.

Sir Mike himself praised the Queen as he described her as the ’embodiment of a life of service’.

He said: ‘When we join the armed forces – the Navy, the Army, the Air Force – we all try in some way to emulate that service.

‘And His Majesty the King, just like Her Majesty, comes from a service family. They know what it’s like to have partners, sons, grandsons, grandchildren serving and serving on operations as well.

‘They understand what it means to be a service family, and that’s why Her Majesty was able to engage with and sought out families – to talk to them, to share and hear their experiences and to share some of her own.

‘It’s a very, very close personal relationship with her armed forces and she will be very sadly missed. But we stand ready to serve His Majesty the King in the same way.’

The Queen arrived at Buckingham Palace last night to tears and cheers from the crowds who stood in the pouring rain to welcome her home after her death at Balmoral last Thursday.

The route from RAF Northolt to the palace was packed, with cars stopping in the road to watch the historic moment and a wave of lights forming as many raised their mobile phones in the air to film the hearse as it passed.

Her Majesty spent her final night in the Bow Room of Buckingham Palace before she is conveyed on a gun carriage to Westminster Hall – the ancient heart of Parliament – where she will lie in state for four days until her funeral on Monday.

As the hearse drove through the gates, Charles could be seen bowing his head with Harry and Meghan stood solemnly behind the monarch.

At 2.22pm exactly this afternoon, the Queen’s coffin will be placed on a gun carriage and lead a procession down a packed Mall, along Whitehall and then into Parliament Square before entering the Palace of Westminster followed by her son, the new King, and her children and grandchildren.