REVEALED: Drones that swarmed US warships off the coast of California in 2019 were from a mysterious Hong Kong-registered cargo spy ship, say US Navy

Warships from the U.S. Navy sailing off the coast of California in 2019 were swarmed by drones from a nearby Hong Kong cargo ship on multiple occasions, the Navy has revealed.

The incidents were all reported between March 30, 2019 and July 30, 2019. Seven different vessels were involved.

One of the warships reported in their official memo that the Hong Kong ship was observing them, noting: ‘MV Bass Strait likely using UAVs (unidentified aerial vehicles) to conduct surveillance on US Naval Forces’.

The drones have long been a source of intrigue, and last month, during an eagerly-anticipated Congressional hearing on ‘unidentified aerial phenomena’, or UFOs, officials said they had solved some of the mystery.

On Friday, website The Drive published information, obtained through Freedom of Information requests, giving more detail about the encounters.

They found that twice on July 15, 2019, warships reported drones overhead that they suspected were being flown from the Hong Kong-flagged bulk carrier, MV Bass Strait. 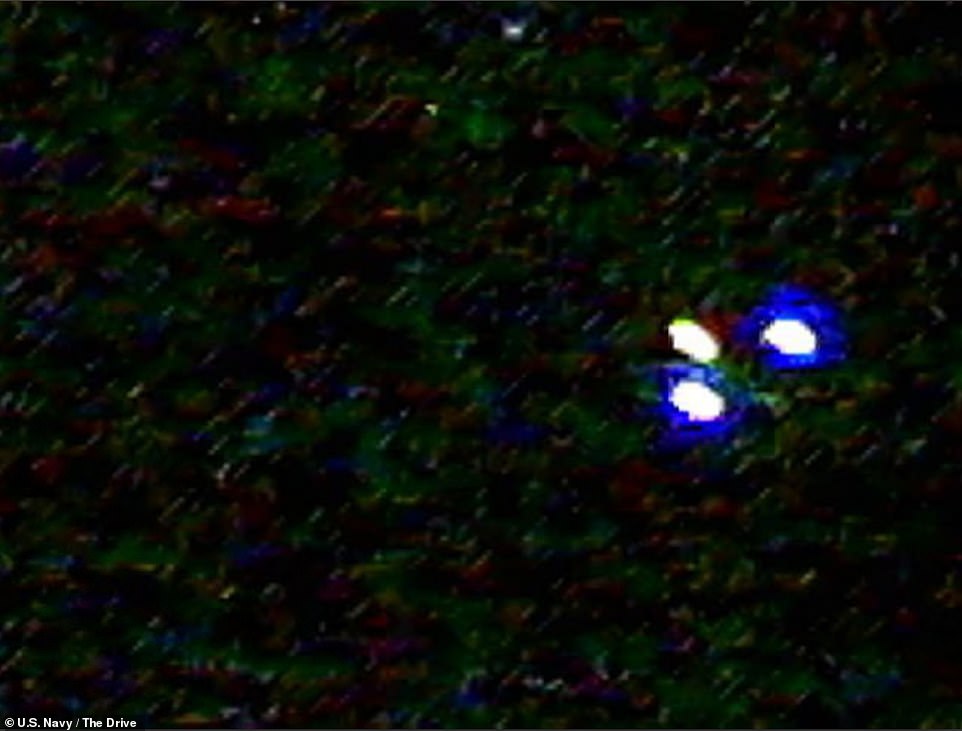 The Zumwalt crew took this photo, showing drones flying overhead on April 24, 2019. It is unclear where the drones were launched or who was controlling them 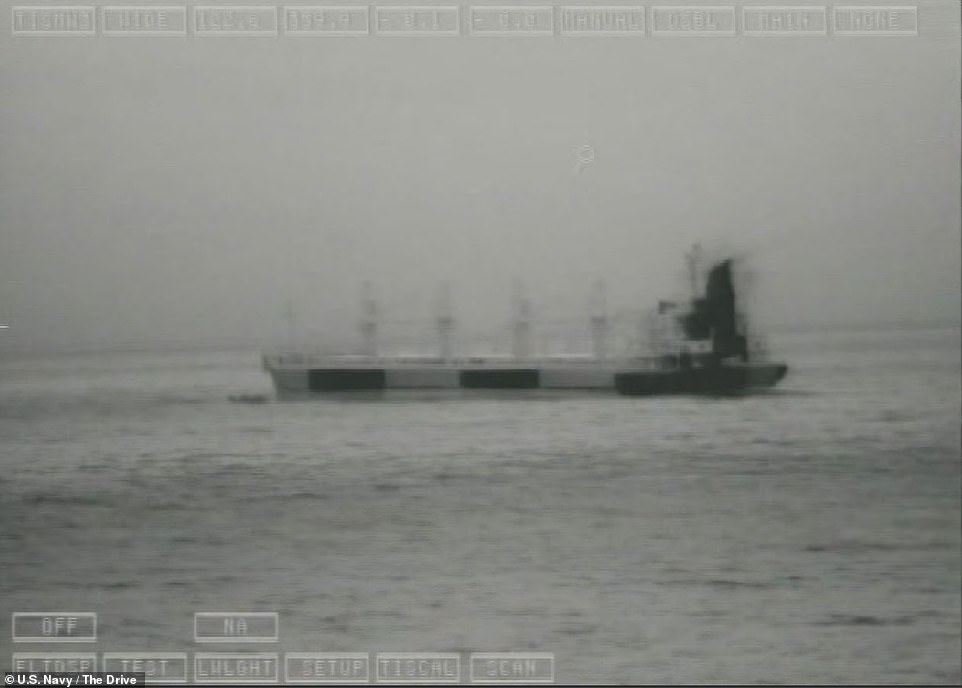 The USS Paul Hamilton took this photo on July 15, 2019, of the Hong Kong-flagged cargo ship, MV Bass Strait, which they believe was controlling drones flying over their vessel. The crew did not respond to their contact 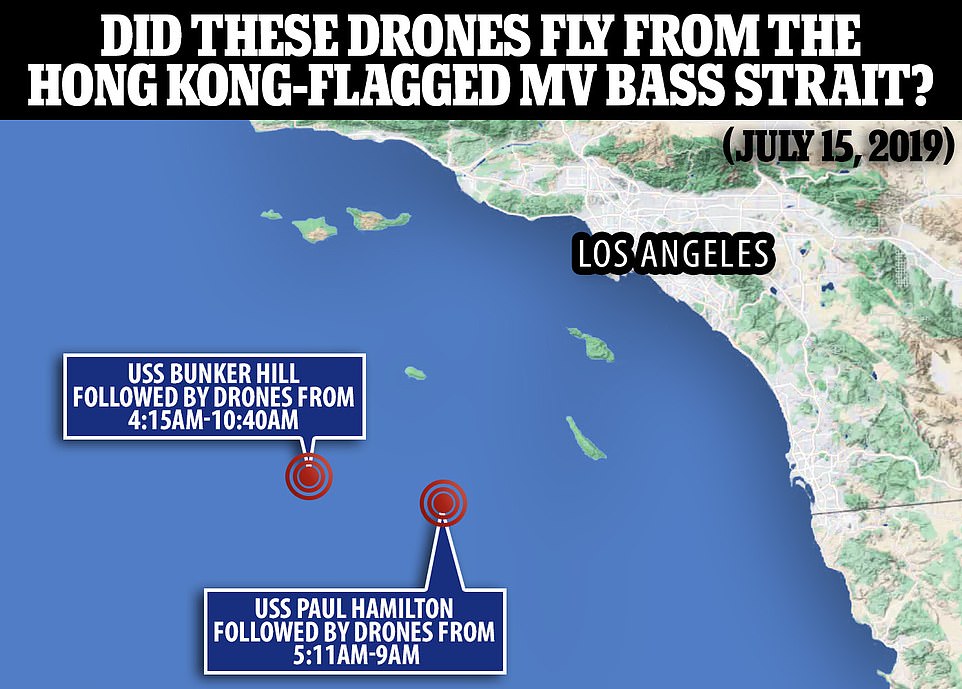 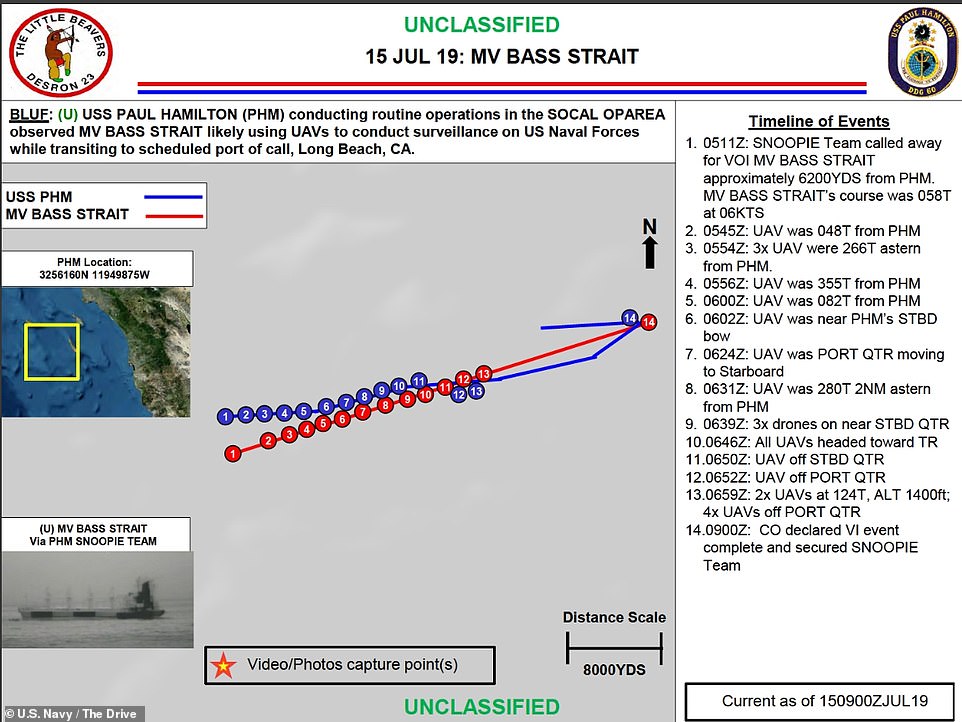 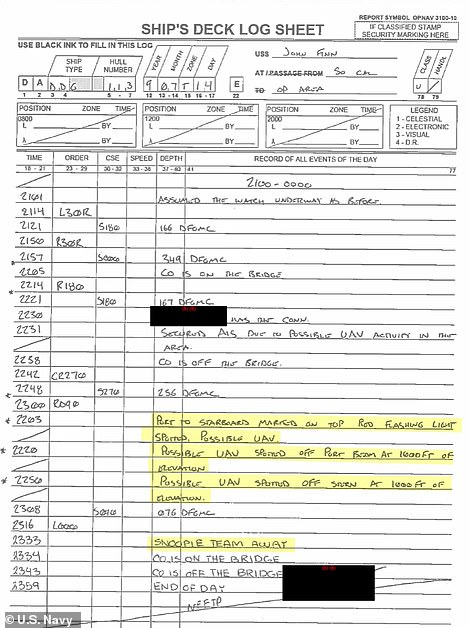 The USS Paul Hamilton logs, obtained by The Drive, show that, on July 14, 2019, the night watch reported seeing possible drones. The SNOOPIE team began investigating at 5:11am on July 15

The first encounter was reported by the USS Bunker Hill, which observed as many as 11 drones nearby.

At 4:15am they called their SNOOPIE team – Ship Nautical Or Otherwise Photographic Interpretation and Exploitation team – to monitor the sightings. SNOOPIE is comprised of sailors who are trained to take photos to document unusual sightings.

Bunker Hill saw that MV Bass Strait was nearby, and radioed them to establish contact. But the ship’s crew did not respond.

The drones were recorded flying as high as 21,000 feet. In the internal documents, obtained by The Drive, the drones are described as ‘quadcopter style UAS’ – unmanned aerial systems.

The drones were last seen by the ship overhead at 10:40am.

That same morning, the USS Paul Hamilton, en route to Long Beach, California, summoned their SNOOPIE team at 5:11am.

They spotted the MV Bass Strait 6,200 yards, or 3.5 miles, away and recorded multiple drones overhead.

In their report, they concluded that ‘MV Bass Strait likely using UAVs (unidentified aerial vehicles) to conduct surveillance on US Naval Forces’. 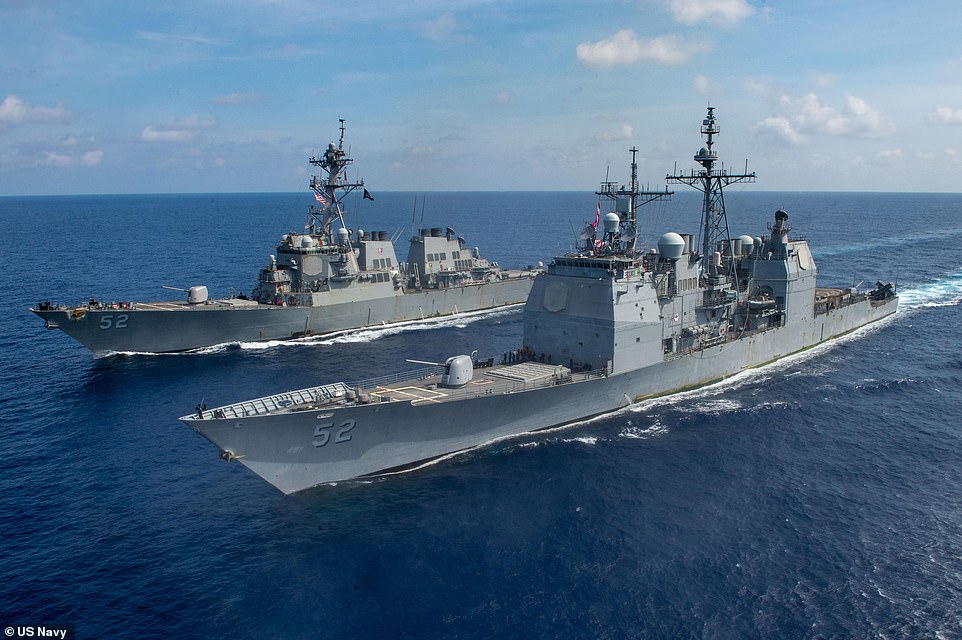 The USS Bunker Hill, pictured at the front, was also followed by a suspected swarm of drones launched from the Hong Kong cargo ship, on the same day as the USS Paul Hamilton 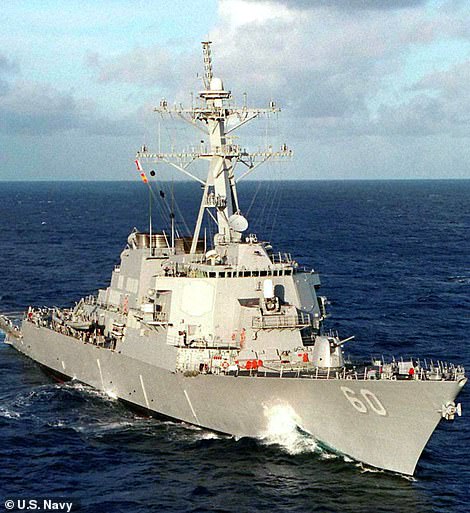 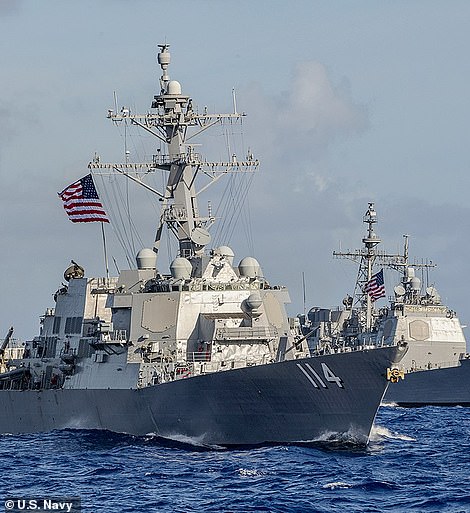 The USS Paul Hamilton (left) recorded multiple encounters with drone swarms throughout 2019. On July 15, they were followed by drones believed to be operated by a Hong Kong-based cargo ship. On July 21, and again on July 30, they reported drones overhead. Fourteen drones surrounded the USS Ralph Johnson (pictured, right) on July 15, 2019 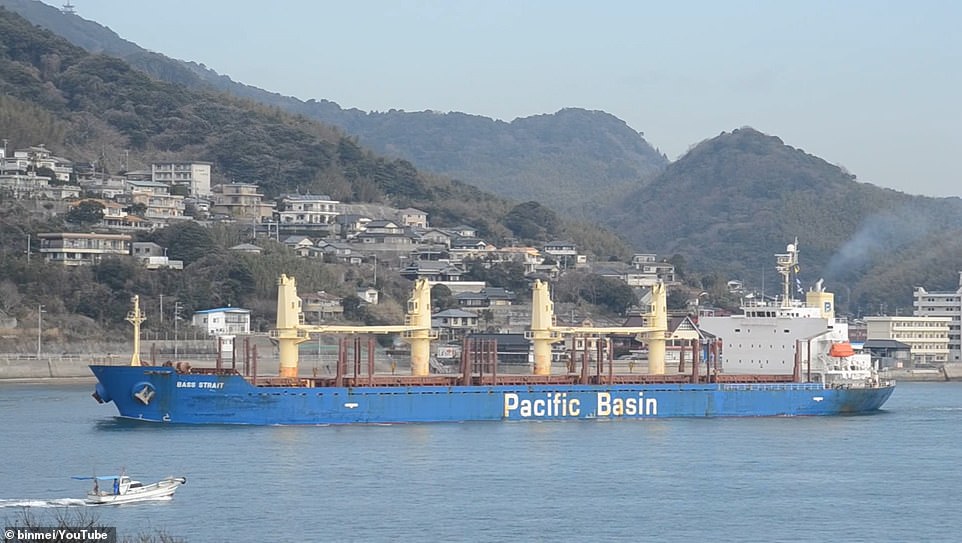 Pacific Basin, the owners of the MV Bass Strait, have not commented on the drone flights

The owners and operators of MV Bass, Hong Kong-based Pacific Basin, have refused to comment.

The information is likely to raise significant concerns in the Pentagon, and heighten existing fears.

In February 2021, Marine General Kenneth McKenzie Jr. said that drones are ‘the most concerning tactical development since the rise of the improvised explosive device in Iraq.’

The Drive reported that the drones linked to the Hong Kong ship were not the only encounters of concern.

In March 2019, in the same international waters off southern California, the amphibious dock landing ship USS Harpers Ferry reported as many as eight unknown drones flying directly over the ship at an altitude of about 500 feet, ‘conducting collection operations’.

It was unclear where those drones came from. 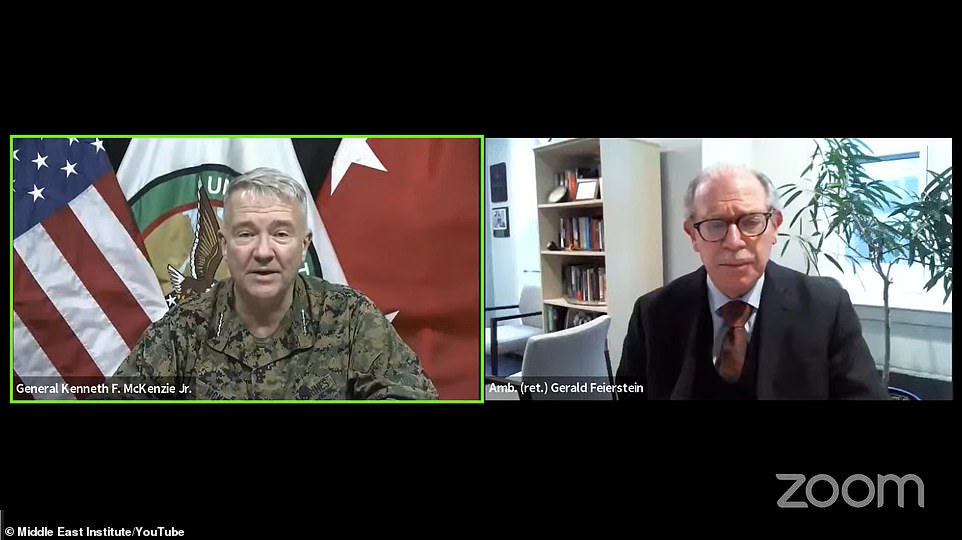 Marine General Kenneth McKenzie is seen in February 2021, speaking at the Middle East Institute about the threat posed by drones 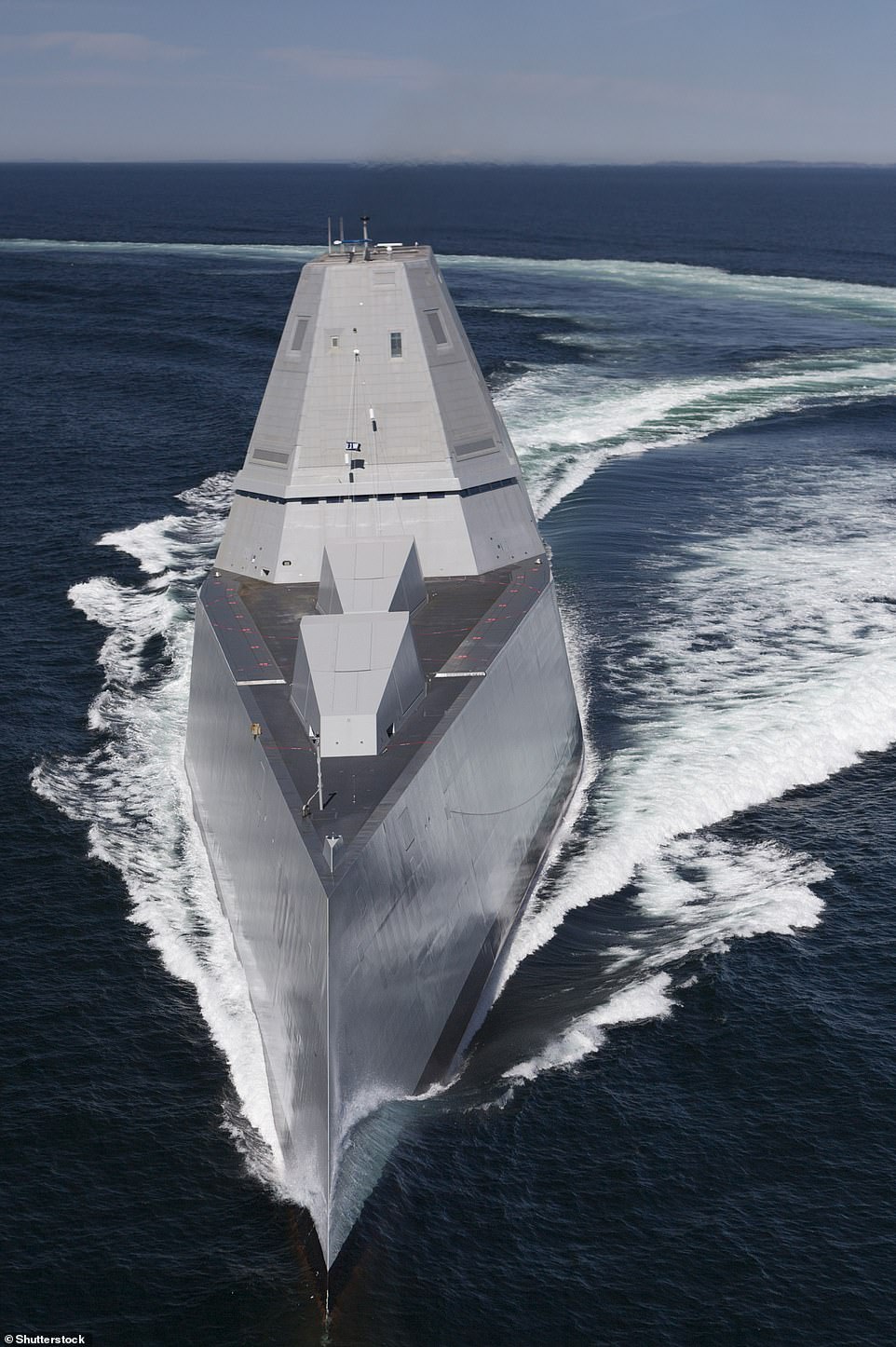 The $4.4 billion Zumwalt, the world’s most sophisticated destroyer, reported drones overhead in April 2019

The following month, the $4.4 billion USS Zumwalt – the world’s largest and most sophisticated destroyer – identified six drones flying overhead in a ‘consistent pattern’ that did not alter ‘course, speed, or altitude.’

They too did not specify the origin of the drones.

After a lull of almost three months, the drones were spotted again in July by numerous warships.

On July 15 the drones suspected to be from the MV Bass Strait were seen: two days later, the USS Russell reported three suspected drones flying over it for an hour, from an unknown location.

Later that week, on July 25, the USS Gabrielle Giffords found four drones overhead, and requested help from the nearby USS Pinckney. Three small boats were nearby at the time.

On July 30, 2019, the USS Russell saw two groups of lights, containing five drones, over a period of about three hours.

Communication was never established with the nearby pleasure craft.

And on the same day, the USS Paul Hamilton reported multiple drones overhead, some only 200 yards away.

‘Definitely in the last two years there has been a marked increase in activity related to swarms,’ he said.

Drone encounters off the coast of southern California

– USS Harpers Ferry reports as many as eight unknown drones flying directly over the ship at an altitude of about 500 feet, ‘conducting collection operations’.

– USS Zumwalt identifies six drones flying overhead in a ‘consistent pattern’ that did not alter ‘course, speed, or altitude.’

– USS Russell reports three suspected drones flying over it for an hour, from an unknown location.

– USS Gabrielle Giffords finds four drones overhead, and request help from the nearby USS Pinckney. Three small boats were nearby.

– USS Russell sees two groups of lights, containing five drones, over a period of about three hours. Communication was never established with the nearby pleasure craft.