Reps. Michael McCaul, R-Texas, and Mike Turner, R-Ohio, on Sunday insisted that the incoming House Republican majority would continue to support funding and arming Ukraine in its war against Russia, downplaying critics inside the GOP’s conference who have vowed to oppose future aid packages.

McCaul and Turner, the likely next chairmen of the House Foreign Affairs and Intelligence Committees, respectively, said on ABC’s “This Week” that Ukraine could win if it gets adequate support from the West.

They also backed House GOP leader Kevin McCarthy’s past statement that Congress shouldn’t provide a “blank check” and said Republicans planned to push for greater oversight and “accountability” over how American support is being used overseas.

“This Week” co-anchor Martha Raddatz cited objections to Ukraine aid from some conservatives — like Georgia Rep. Marjorie Taylor Greene — and asked, “Are you really certain that Republicans will bring this to the floor?”

“I think the majorities on both sides of the aisle support this effort,” McCaul said. “I think everybody has a voice in Congress. And the fact is, we are going to provide more oversight, transparency and accountability. We’re not going to write a blank check.”

“Does that diminish our will to help the Ukraine people fight? No. But we’re going to do it in a responsible way,” McCaul said. Otherwise, he said, authoritarian countries like China and Iran could become emboldened by Russia’s success.

“The issue, obviously, is we don’t need to pass $40 billion, large Democrat bills that have been passed to send $8 billion to Ukraine,” Turner told Raddatz, who recently returned from a reporting trip in Ukraine.

Raddatz pushed back on Turner, noting that beyond the immediate funds for procurement, that whole aid package was focused on Ukraine including with long-term financial support for rebuilding. Both McCaul and Turner also voted for the $40 billion package in May.

The lawmakers’ comments come ahead of what is expected to be a brutal winter in Ukraine, with Russia, some nine months after its invasion, targeting Ukraine’s energy infrastructure — limiting power and heat to major cities.

McCaul and Turner said that providing Ukraine with adequate air defense systems is a top priority, and McCaul contended the federal government had “slow-walked” some of its lethal support. 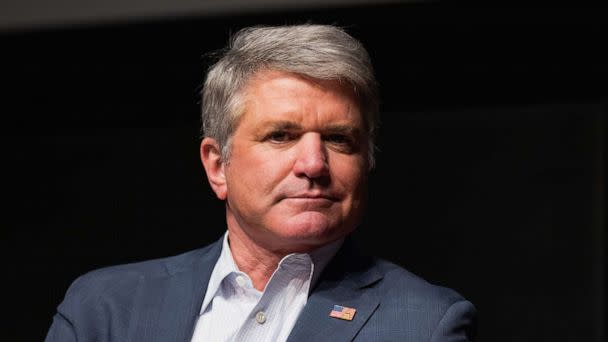 When Raddatz pressed McCaul on whether providing certain munitions could “incite Russia” after McCaul raised the possibility of extending Ukraine’s range into Crimea, which Russia annexed in 2014, McCaul said: “Crimea is not part of Russia under international law. So if they can hit into Crimea, I think that’s fair game.”

But, Turner said, simply handing over U.S. equipment might not be the answer given its sophistication and how long it could take to train and ultimately use.

More broadly, McCaul and Turner said that starting in January, their committees will launch investigations into the U.S. military withdrawal from Afghanistan. Republicans could also scrutinize Homeland Security Secretary Alejandro Mayorkas’ handling of the southern border and the controversial contents of a laptop that Republicans say was owned by Hunter Biden, President Joe Biden’s son.

“One thing that’s going to be very, very positive about this Congress is we’re going to get back to the committees working again,” Turner said.

McCaul also expressed confidence that McCarthy will have the votes to become speaker in the next Congress despite public criticism from several hard-right lawmakers.

McCarthy will need 218 votes on the House floor on Jan. 3 to be speaker. At least four Republicans in the likely 222-seat majority have vowed to oppose him — complicating his path to winning the gavel in the first round of voting.

The entire House will continue voting for a speaker until a candidate wins a majority. Lawmakers could nominate another compromise candidate if McCarthy fails to secure enough support.

“Do you think he has the votes?” Raddatz asked.

“Kevin has worked harder than any other candidate for speaker I’ve seen. I think he’s got the majority of our conference,” McCaul said. “And the fact is, what’s the alternative here?”

Republicans are committed to Ukraine but want ‘accountability’ over funding, McCaul and Turner say originally appeared on abcnews.go.com