Work has begun on Jamie Oliver’s new £6million home three weeks after his restaurant empire collapsed with debts of £71.5million.

The TV chef, 44, bought Spains Hall near Braintree in Essex at the end of 2018 and has said he wants to turn into the ‘perfect family home’ for his wife and five children. The six-bedroom Tudor mansion dates back to 1570 and is surrounded by 70 acres of land.

Yesterday builders moved in and erected scaffolding, which covers the front and roof, with several work vans and a skip spotted in the grounds. 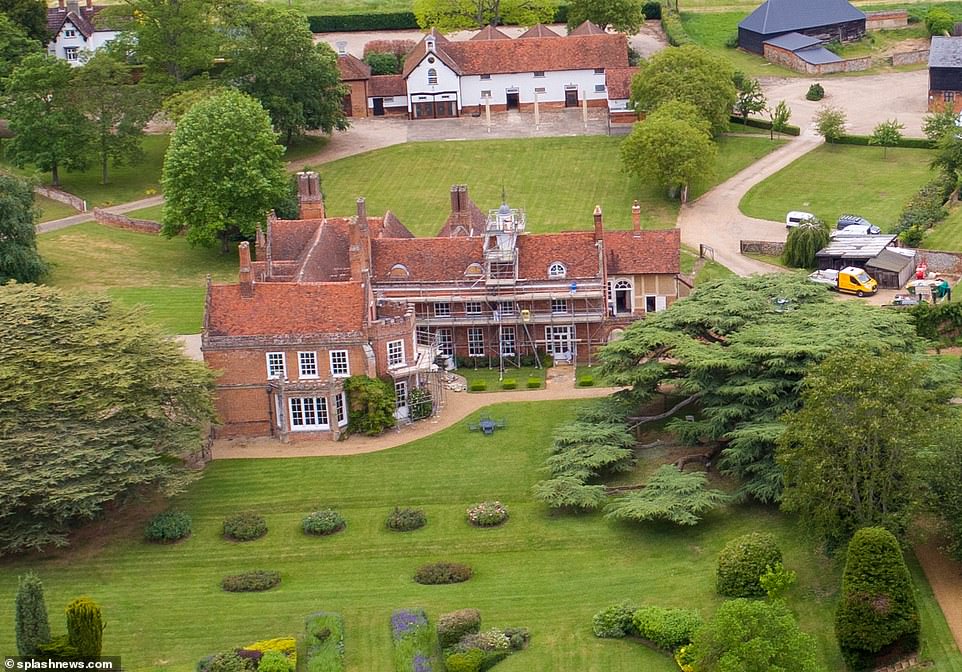 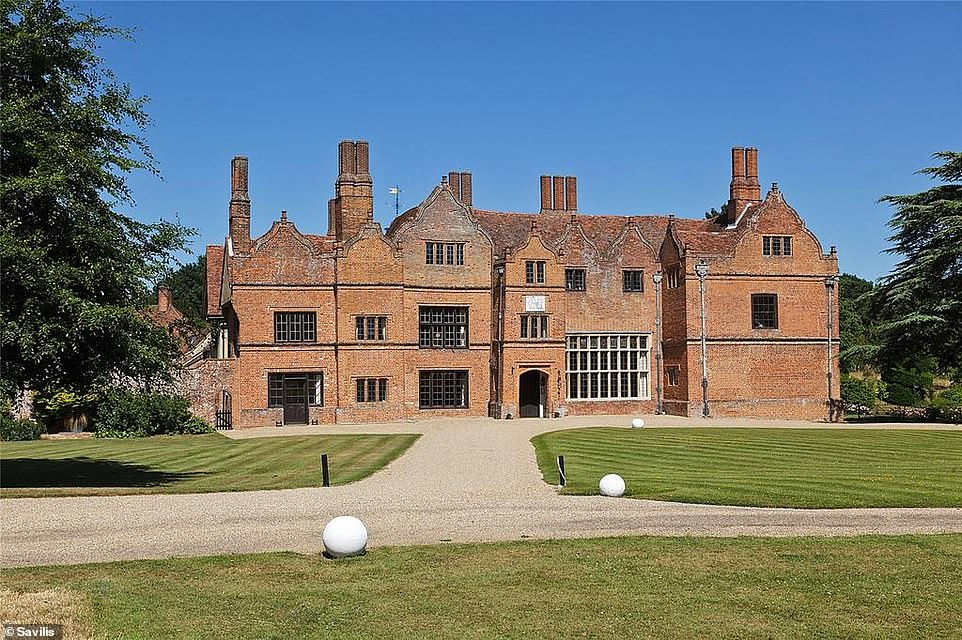 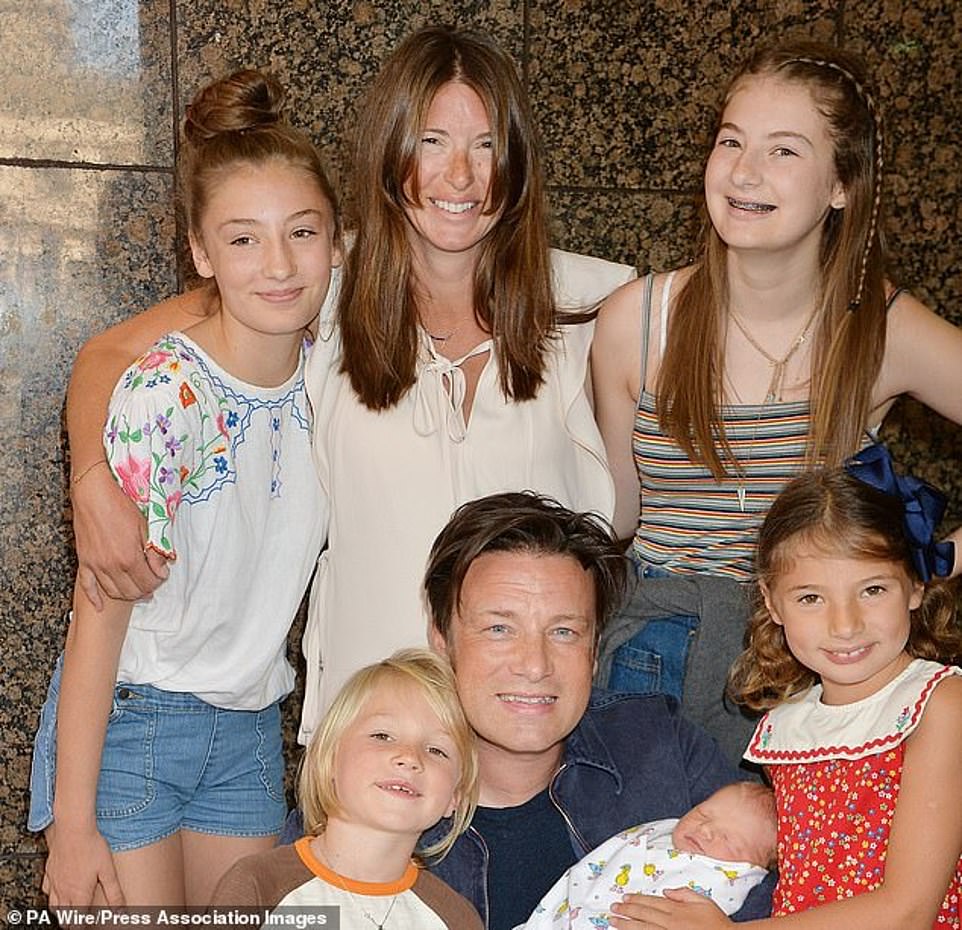 Jamie Oliver is pictured with his five children and wife Jools, who all currently live in a mansion near Hampstead Heath

The 16th century property is being refurbished just three weeks after Oliver’s restaurant empire went into administration putting 1,300 jobs at risk, after months of difficulties and restaurant closures.

It is not yet clear when the Olivers plan to make the move to Essex, where the father-of-five was born and bred, and when renovations will be completed.

The 44-year-old previously clashed with planning officials at Braintree Council over plans to move an ancient pot hook at Spains Hall so he can ‘create new dishes using historical cooking methods’. 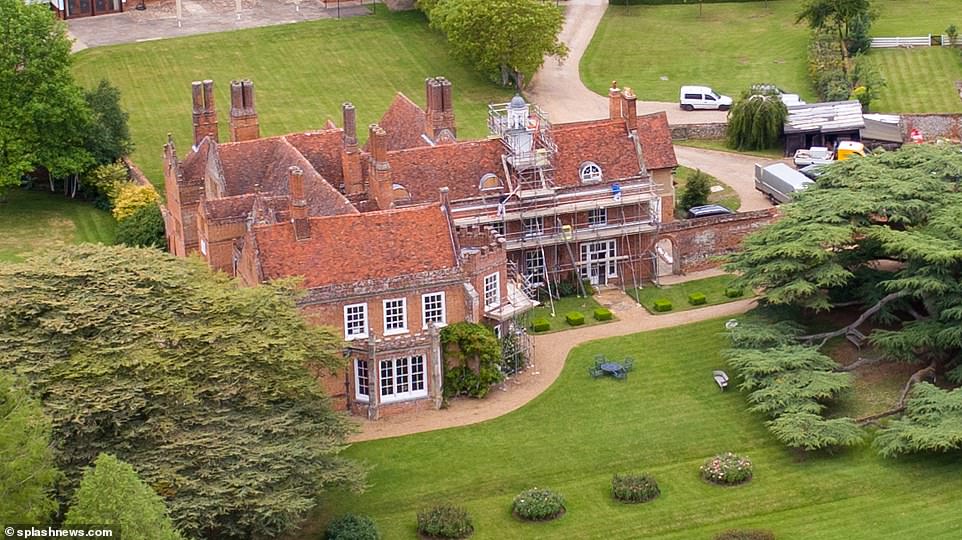 Builders were spotted working on Oliver’s new multi-million-pound country pad in Essex yesterday – three weeks after his restaurant empire collapsed with the loss of 1,000 jobs 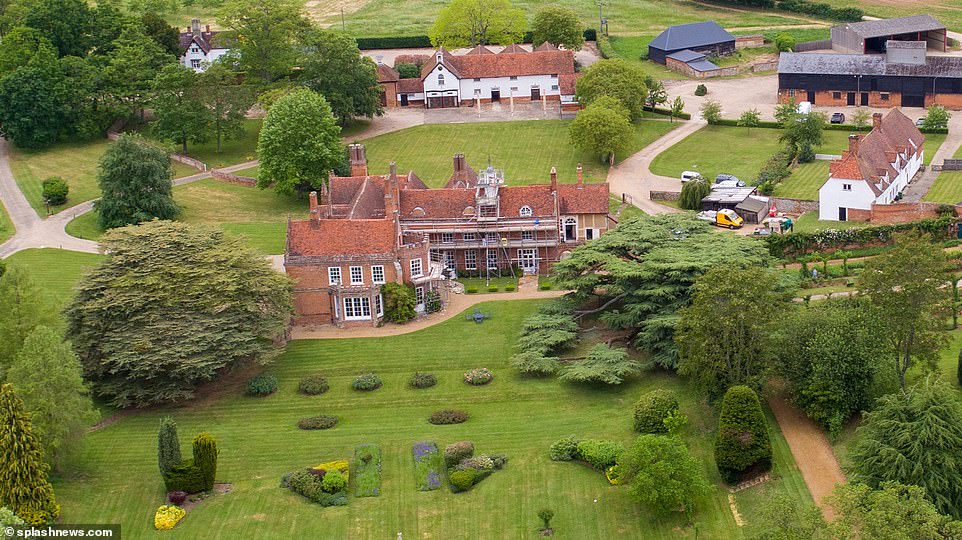 The Elizabethan country house, which dates back to 1570, has been covered in scaffolding as builders work on the roof. A large number of trade vans were spotted in the grounds of the property and a full skip was seen near the house

According to the council, there was ‘no clear evidence to support its removal’ from a bedroom to a kitchen.

Listed buildings are considered nationally important and therefore in most cases have extra legal permission when it comes to planning and any amendments to the property.

Planning documents submitted to Braintree District Council show that the chef wants to move the ‘trammel’ hook, which was once used to hold a pot over a kettle, over a fire while cooking.

Documents also show that he plans to strip out book shelves from the library, sort out the historic floorboards, repair windows and replace beams. 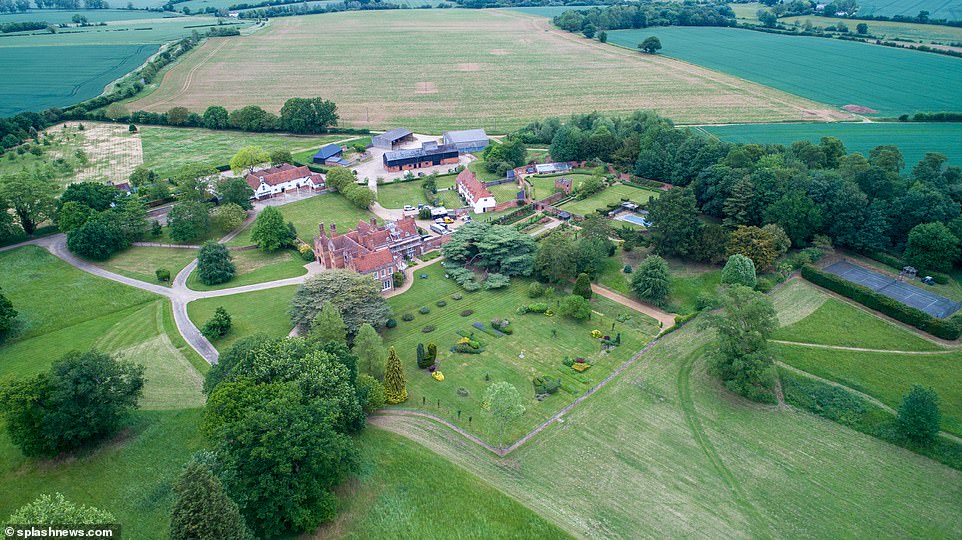 It is not clear when the Olivers plan to move to Essex, where the TV chef is originally from, from their current £8.9million home near Hampstead Heath, north London

How did Jamie go from Naked Chef TV star to failing restaurateur? 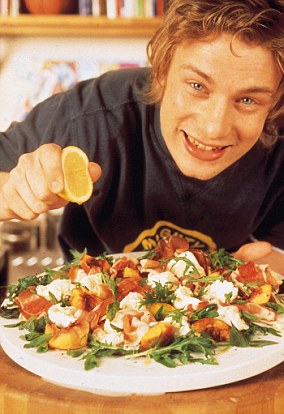 Pictured: Jamie Oliver on The Naked Chef during its second series in 2000

Born to pub owners Trevor and Sally Oliver in Clavering, Essex, Jamie Oliver practised cooking in the kitchen with his parents and sister.

A severe dyslexic, he left school at 16 with two GCSEs.

He went on to attend Westminster Technical College, earning a qualification in home economics, before getting a job as a pastry chef at the London restaurant of Italian cook Antonio Carluccio.

He first hit TV screens aged 23 on The Naked Chef, establishing his reputation as a cheeky, laid-back cook from Essex.

The BBC series was praised at the time for inspiring men to cook. It first aired on April 14th in 1999 and ran for three series and including Christmas specials.

They married in Essex in June 2000, with a low-key reception in Jamie’s parents’ garden, to which the chef wore a pale blue Paul Smith suit and snakeskin brogues.

Jools worked as a waitress before becoming a TV assistant, model and, briefly, her husband’s PA.

He went on to present more than 25 cooking series, spearheading a campaign for improved nutrition in school meals. 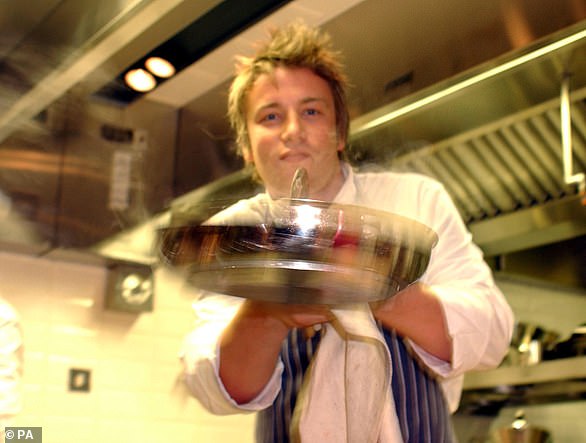 Oliver (pictured in 2002), first hit TV screens aged 23 on The Naked Chef, establishing his reputation as a cheeky, laid-back cook from Essex

Jamie famously waged war on Turkey Twizzlers in 2005, when he visited Westminster to speak with politicians about his healthy school dinners campaign.

He opened his first Jamie’s Italian in Oxford in 2008, growing it to more than 60 restaurants worldwide.

In 2017 the restaurant chain lost almost £20million and was forced to close several of its branches.

It teetered on the edge of bankruptcy last year before the chef injected £12.7million of his savings into the business.

He cited rents, rates, the high street declining, food costs, Brexit and an increase in the minimum wage as potential factors.

That year he closed the last of his Union Jacks eateries and scrapped his magazine Jamie, which had been in print for almost 10 years. The father-of-five went on to describe that year as the worst of his life.

By 2018, Jamie’s Italian was struggling with debts of £71.5million. More than 600 people lost their jobs earlier this year the chain said it would close 12 sites.

Today he announced that his restaurant group had gone into administration. Jamie’s Italian, Barbecoa and Fifteen have appointed KPMG to oversee the process.

Despite his financial woes, Jamie recently splashed out £6 million on a 16th century Essex mansion, in a 70-acre estate, complete with ghost. He’s reportedly planning to convert outhouses into a mega-kitchen from which he can film shows and hold his masterclasses.

He and Jools spent £8.9 million on a Grade II-listed mansion near Hampstead Heath, north London, in 2016, and spent two years renovating it.

It boasted seven bedrooms, an open-plan kitchen with cream Aga, a grand piano and a Louis XV-style bed worth £2,200, it’s certainly impressive.

The Olivers have fitted the house with some quirky features, including a wood-fired pizza oven, a treehouse bed and a vegetable patch for the children.

Jamie hired his brother-in-law, Paul Hunt, married to his sister Anna-Marie, to run Jamie Oliver Ltd in 2014 — and last year Hunt assumed responsibility for the restaurants, too.

But some of his methods — such as making staff redundant over Christmas and cutting ties with Jamie’s friends and culinary mentors — have led to a reputation for ruthlessness.

Last year, an anonymous insider described him as an ‘arrogant, incompetent failure’ who was ‘running the business into the ground’.

Jamie rebutted the claims, saying the story was ‘nonsense’ and that Paul was ‘a loyal brother-in-law and loving father as well as a strong and capable CEO’. 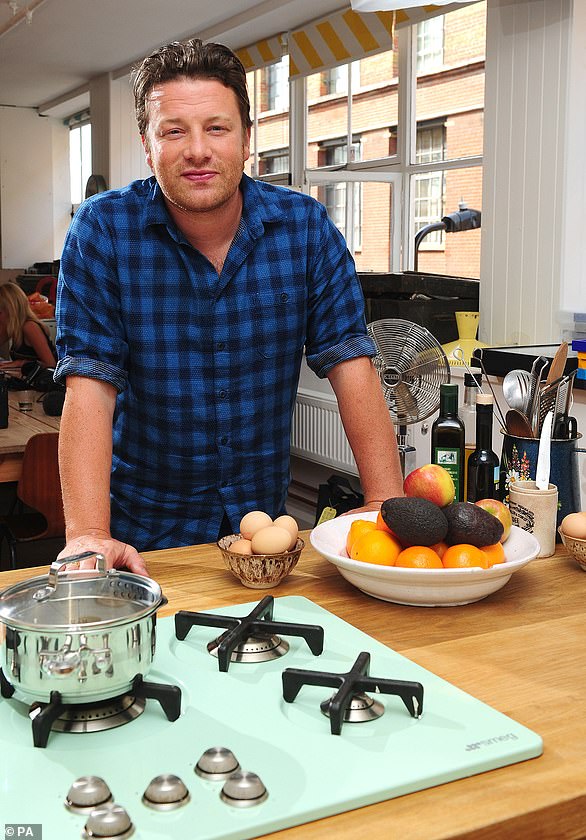 Jamie (pictured in 2013) famously waged war on Turkey Twizzlers in 2005, when he visited Westminster to speak with politicians about his healthy school dinners campaign