More than a thousand animals have died as a result of a drought in Kenya, according to a report released by the country’s Ministry of Tourism and Wildlife, including hundreds of zebras and elephants.

Among the deaths related to the drought are 512 wildebeests, 430 zebras, 205 elephants and 51 buffaloes. 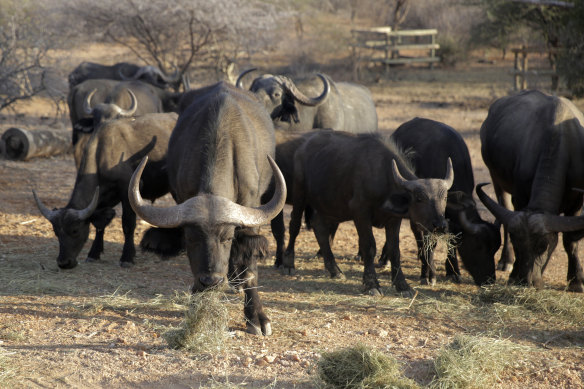 Buffalo feed on grass brought by a ranger as hundreds of animals have died in Kenyan wildlife preserves during East Africa’s worst drought in decades, in Samburu National Reserve, Kenya.Credit:AP

The report, released on Saturday, provides insight into the effects of a years-long drought on wildlife in the area, as the United Nations and other organisations have for months warned about the humanitarian impact.

“In Ethiopia, Kenya, and Somalia, we are on the brink of an unprecedented humanitarian catastrophe,” Guleid Artan, director of the World Meteorological Organisation’s climate centre for East Africa, said in August. This season is the “fifth consecutive failed rainy season” in the region, he said.

Kenya’s secretary of tourism and wildlife, Peninah Malonza, said at a news conference that the country was intervening by providing hay, water and “enhanced surveillance of wildlife outside protected areas to reduce human-wildlife conflicts”.

The figures come as world leaders gather in Egypt on Sunday for COP27, the annual UN Climate Change Conference. Amina J. Mohammed, deputy secretary general of the United Nations, called on richer countries to focus on providing climate assistance to developing nations in Africa, writing in an op-ed that the “worsening climate chaos is wreaking havoc across” the continent. 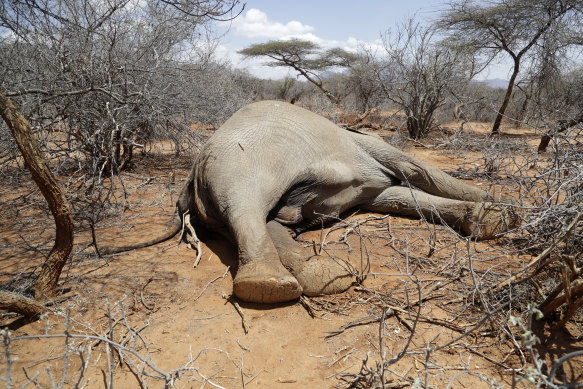 An elephant, that was killed by Kenya Wildlife Service rangers after it killed a woman as it was looking for water and food amid the drought, lies in Loolkuniyani, Samburu County in Kenya, last month.Credit:AP

Among the 430 zebras killed by the drought, 49 are Grevy’s zebras, an endangered species with about 3,000 estimated to be left in the wild, according to the Grevy’s Zebra Trust, which assisted in collecting data for the report. The deaths come despite feeding programs in the area, the report said.

Zebras and wildebeests were particularly affected by the drought, the report said.

Elephants were also hit, especially young ones, which are not tall enough to reach higher food sources, it said. In the Amboseli ecosystem, in southwest Kenya – which is home to about 1,900 elephants – 76 died; 45 of them were juveniles who died of malnutrition because “the mothers could not produce enough milk.”

The figures collected between February and October could be an undercount, the report cautioned, because the carcasses of animals that died as a result of the drought may have been consumed by predators. It also noted that the landscapes are vast, so researchers “may not have accessed every part of area where wildlife died”. 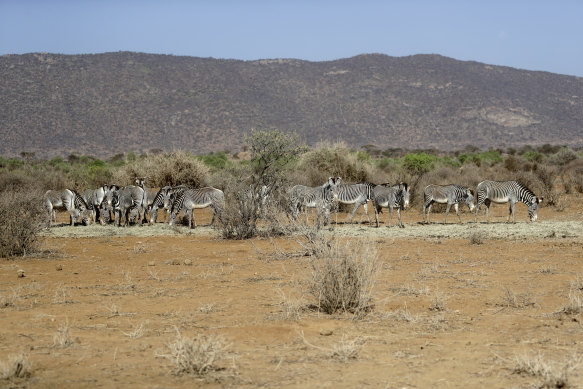 Zebras feed on grass brought by rangers in Samburu National Reserve, Kenya, where hundreds of animals have died due to drought. Credit:AP

The deaths are a “stark reminder of the devastating impact of climate change on biodiversity,” said Sophie le Clue, chief executive of ADM Capital Foundation, an environmental nonprofit organisation. “The world is facing a biodiversity crisis as we face unprecedented species extinctions globally,” she said, adding that the problem “remains far from being a priority on political agendas.”

Hannah Mumby, an assistant professor at the University of Hong Kong whose research focuses on elephants, said that “we have to be aware that extreme events lasting years and causing these huge mortality impacts should be unusual,” but that two other severe droughts have hit Kenya in the past decade.

“This suggests the climate crisis is playing out,” she said, “and the implications for biodiversity, livestock and food security are taking place now.”

The report recommended the “urgent and immediate” supply of water and salt licks – a source of minerals – in the ecosystems affected by the drought. It also called for the supply of hay for Grevy’s zebras in the country’s northern region to be “enhanced” during November and December to cover a wider area.

In the Amboseli ecosystem, an “urgent total aerial census of wildlife” should be conducted, it said, before the next rainy season – this spring – to evaluate the effects of the drought.