London: Meghan, Britain’s Duchess of Sussex, has given birth to her second child, a baby girl, whom she and husband Prince Harry have named after Queen Elizabeth and his late mother Princess Diana.

Lilibet ‘Lili’ Diana Mountbatten-Windsor was born on Friday at the Santa Barbara Cottage Hospital in California, with Harry in attendance. 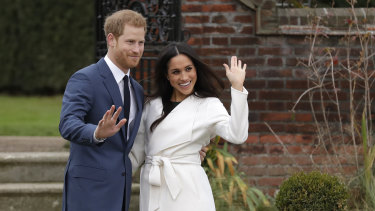 The second baby for the Duke and Duchess of Sussex is officially here: Meghan gave birth to a healthy girl on Friday.Credit:AP

The choice of name – Lilibet is a family nickname for the 95-year-old British monarch – pays tribute to the Queen after a difficult year for the couple, and the wider royal family.

Following are reactions to the news:

Buckingham Palace, in a statement

Prince Charles and Camilla, Duchess of Cornwall, via twitter

“Congratulations to Harry, Meghan and Archie on the arrival of baby Lilibet Diana. Wishing them all well at this special time.”

“We are all delighted by the happy news of the arrival of baby Lili. Congratulations to Harry, Meghan and Archie.”

“Many congratulations to The Duke & Duchess of Sussex on the birth of their daughter.”

“Wonderful news! Congratulations to the Duke and Duchess of Sussex.”

Invictus games foundation, an international sporting event for wounded and sick service people and veterans that was founded by Prince Harry:

“Congratulations to our Patron The Duke of Sussex and to the Duchess of Sussex on the birth of their second child! Welcome to the #InvictusFamily Lilibet ‘Lili’ Diana Mountbatten-Windsor!”

US Charge d’affaires Yael Lempert, on behalf of the US Embassy in London:

“Congratulations to the Duke and Duchess of Sussex on the arrival of their daughter Lilibet Diana Mountbatten Windsor! Just in time for Father’s Day!”