London: Russian forces and Kremlin-backed affiliates have subjected Ukrainian prisoners to extrajudicial executions, sexual violence and other abuses since its invasion more than six months ago, United Nations investigators allege.

A report from the Office of the High Commissioner for Human Rights, released on Tuesday, found rights violations had occurred on both sides of the conflict but said the ill-treatment of civilians and prisoners of war by Russian forces and affiliated armed groups had far outweighed those committed by Ukrainian forces. 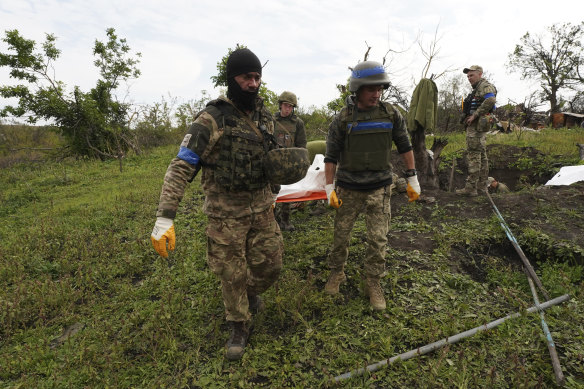 Ukrainian soldiers carry a body of their comrade-in-arms killed in a battle against the Russian troops in the Kharkiv region, Ukraine.Credit:AP

The UN Human Rights Monitoring Mission in Ukraine investigations found a wide range of violations of international human rights and humanitarian law, involving both civilians and combatants including wilful killings and numerous cases of arbitrary detention and enforced disappearance, torture and ill-treatment.

Matilda Bogner, the Australian-born head of the mission, said Ukrainian prisoners of war had faced serious risks to their health and safety from Russian and pro-Russian captors during the conflict, which is now in its seventh month.

“The ongoing armed attack by the Russian Federation against Ukraine and associated hostilities have resulted in a dire human rights situation across the country,” she said, introducing the report at a news conference in Kyiv.

“The armed conflict has led to a wide range of human rights violations affecting both civilians and combatants. They have been subject to cruel and degrading treatment by Russian security forces and those of the affiliated armed groups which appeared to be systematic.” 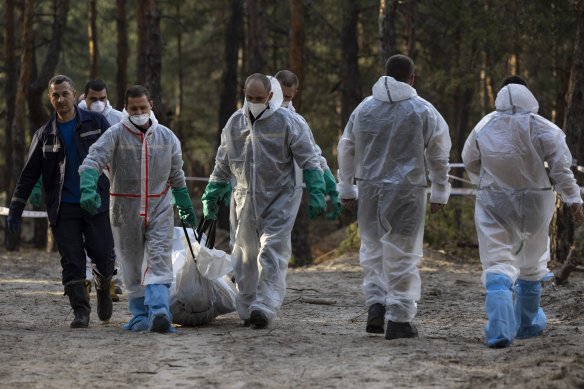 Workers carry bodies found in a mass grave near the city of Izium this month which was recaptured during a Ukrainian counter-offensive.Credit:Getty

The report follows similar allegations from Erik Mose, who heads the Commission of Inquiry on Ukraine, who told the UN Human Rights Council in Geneva this week that Russia had committed war crimes including rape, torture, executions, and confinement of children in areas it occupied in Ukraine.

The mission has corroborated that 5996 civilians were killed, with the toll including 382 children, between February 24 and September 25. An additional 8848 civilians were injured in the same period. The actual figures are much higher, as the collection and verification of information from several locations affected by hostilities remain severely hindered.

Neither the Russian nor Ukrainian governments have commented on the report, compiled between February 1 and July 31.

The mission documented the rape of eight women and one girl, 15 cases of sexual violence used as a method of torture or ill-treatment against men, 11 cases of forced public stripping against both men and women considered to be “lawbreakers” and eight cases of other forms of sexual violence, such as forced nudity, unwanted sexual touching, sexual abuse and threats of sexual violence. 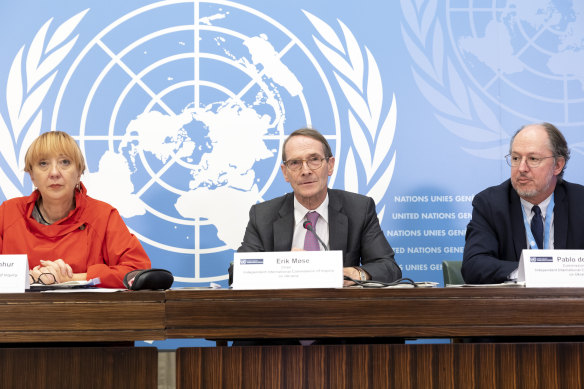 The report states that 90 per cent of civilian casualties were recorded in areas under government control when the casualties occurred and 10 per cent in parts of Luhansk and Donetsk regions controlled by Russian armed forces and affiliated armed groups. The majority of civilian casualties documented since February 24 were caused by the use of explosive weapons in populated areas.

Western officials estimate that Russia has suffered 70,000 to 80,000 casualties since it invaded Ukraine in February.

The OHCHR said it was continuing to document and verify allegations of unlawful killings of hundreds of civilians by Russian armed forces in the Kyiv, Sumy and Kharkiv regions, areas occupied earlier by Russian forces and now back under Ukrainian control.

It said rights violations against Ukrainian servicemen included extrajudicial executions, sexual violence, denial of a fair trial and a lack of food, water and medical assistance. Some of these violations may amount to war crimes, the report said.

But the report also found that some Russian prisoners of war were subjected to torture and ill-treatment by members of the Ukrainian armed forces mostly during their capture or while in transit to places of internment. 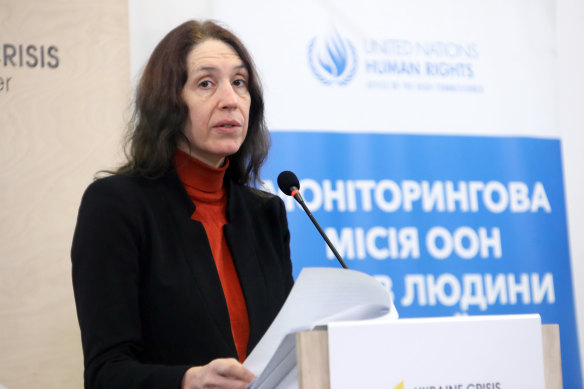 “There must be timely and effective investigations into all allegations of violations of international humanitarian law and human rights law, including torture, ill-treatment, arbitrary detention and sexual violence. Regardless of their affiliation, perpetrators, including persons in positions of command, need to be duly prosecuted,” she said.

Bogner said during the reporting period, 17 journalists and media workers, including bloggers, were killed. Ten of them were killed in combat zones, while others were found dead in areas previously or currently controlled by Russian armed forces or affiliated armed groups.

She said the report emphasised that freedom of expression, including access to media, had been restricted in areas occupied by the Russian Federation or controlled by Russian armed forces or affiliated armed groups.