A Victorian MP says an unprecedented level of "fury and anger" is being directed towards politicians online.

Reason Party leader Fiona Patten's comments came after a man in Queensland was charged with harassing her on social media. 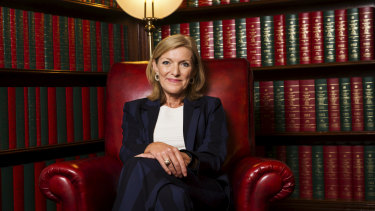 Ms Patten last year reported to parliamentary security a video posted to Facebook in which a man said he would "shave her head" and drag her up the street if she supported the government's COVID-19 omnibus bill.

"It was just so extreme and so violent," she said. "It was really outrageous, incredibly threatening and we just thought we can't let that slide."

The video was referred to Queensland Police, who in November charged a 60-year-old man from Redland Bay with using a carriage service to menace, harass or cause offence relating to the video posted on September 22.

The man, John James Wilson, will next face court on February 11.

Ms Patten told The Age that the level of hate directed at MPs online was at an all-time high, particularly during the debate about the state of emergency extension in September last year.

"For nearly six weeks we could not answer the phone in our office because it was just people ringing up saying 'you bitch, we will find you'."

"And you know we are resilient people, but it was really affecting the health of my electorate officers. It's not just me affected by this."

A man is currently before the courts in NSW accused of threatening to kill Victorian Premier Daniel Andrews in a series of emails sent in November last year.

According to court documents, Mr Faccio sent three emails to Victorian Premier Daniel Andrews over a 10-minute period on the evening of November 11. The third email allegedly contained a death threat.

Ms Patten said it was concerning to witness a growing intensity in the nature of the abuse and threatening messages being directed towards politicians.

"It is frightening and certainly after [the alleged threat against] Premier Andrews, I know a number of my colleagues also received significant threats, it also frightens people to speak out," she said.

"That actually makes it hard for some politicians, particularly politicians from small parties, to do what is right. I spoke to a couple of crossbenchers, I won't say who they are, who were concerned about the ramifications of supporting government legislation. And that's really dangerous."

She said she was glad Queensland Police had taken the threat against her seriously and that it showed that there are consequences for abusive online behaviour.

"While I support free speech, I don't support [the] inciting of crimes and vilification of people. Even now, I'm not on social media as much as I used to be, it did have a silencing effect."

Ms Patten is pushing to widen the Racial and Religious Tolerance Act to include hate speech targeting people for their gender, disability, sexual orientation or gender identity, as well as addressing online trolling.