Psychologist, 37, bludgeoned his mother, 64, to death with a hammer in front of her beloved dachshund then transferred £25,000 from her bank to his own account to buy a Jaguar, court hears 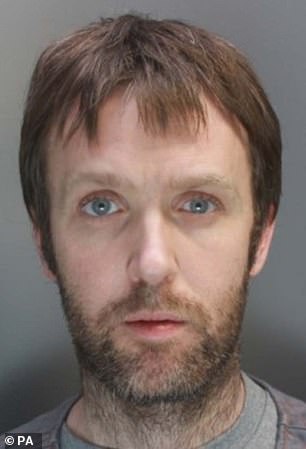 A psychologist killed his mother in a violent hammer attack before transferring £25,000 from her bank account to his own so he could buy a Jaguar, a court has heard.

Robert Child, 37, admitted murdering his mother Janice, 64, who was found in a bloodstained utility room under the stairs of her home in Woolton, Liverpool on March 6.

The psychologist, who transferred £25,000 from his mother’s account a day earlier, denies carrying out the killing for financial gain.

Police were called to Mrs Child’s home in the early hours of March 6 after neighbours were alerted by the sound of her dog Alfie barking, Liverpool Crown Court heard today.

It was said she lived alone with the dachshund, who she was ‘very attached’ to, as her husband Stanley was in a care home with dementia. He has since died.

Her body was found under the stairs with 31 wounds, including to the skull and face as well as defensive injuries to her hands, thought to have been caused by a hammer and another weapon.

Opening the trial today, Nigel Benson QC said Child had been planning a wedding to his fiancee in May, despite still being married to a former partner. 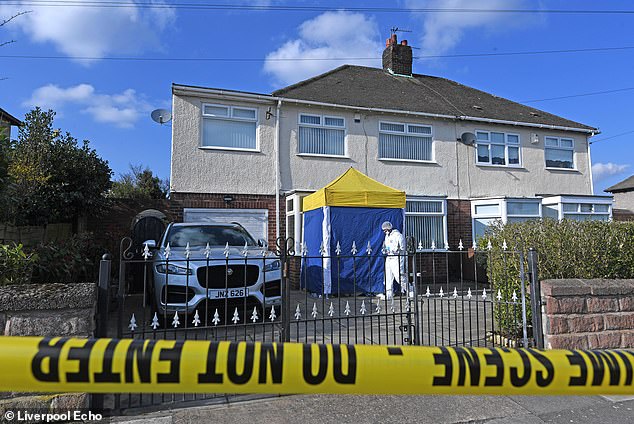 The psychologist, who transferred £25,000 from his mother’s account a day earlier, denied carrying out the killing for financial gain. Pictured: The scene in Liverpool in March

He worked at the University of Liverpool in the area of sports psychology but had not completed a PhD, although he described himself as a doctor, Mr Benson said.

He also falsely claimed to work as an analyst or football scout for Manchester United.

At the time of his mother’s death he had £1.01 in his bank account, the court heard.

Mr Benson said: ‘The prosecution advance the case that the defendant was in financial straits.’

When officers went to Child’s house in Thingwall, Wirral, on March 6 to tell him his mother’s body had been found, his partner told them he was out buying a new car.

Child returned in a blue Jaguar, Mr Benson said, and appeared shocked and upset at the news.

He said: ‘The prosecution say that reaction was entirely feigned. It was a simulated response because he knew full well his mother was dead. He killed her less than 24 hours before.’ 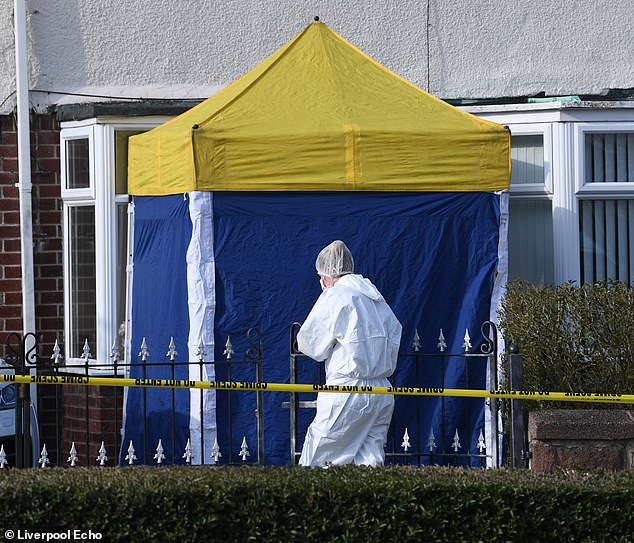 Police were called to Mrs Child’s home in the early hours of March 6 after neighbours were alerted by the sound of her dog Alfie barking, Liverpool Crown Court heard today

The court heard Child had looked at buying the £14,000 car in February but was unable to provide the deposit.

Mr Benson said a transaction to transfer £25,000 to Child’s account from his mother was made on her mobile phone just after 4.30pm on March 5.

He said: ‘That, the prosecution say, was some five or six minutes after the defendant had left his mother’s house.’

The court heard Child claimed he had enough money to buy the car, without needing to take it from his mother.

Mr Benson said: ‘He may not have needed it but he wanted it. That much, we would suggest, is beyond sensible dispute.’

Child was arrested by officers after giving inconsistent accounts of his movements on the day of his mother’s death.

He was due to stand trial for murder on Monday but changed his plea to guilty on the first day, having previously pleaded guilty to manslaughter.

The trial of issue continues.