Labour lashed out at new Home Secretary Priti Patel today after she was a shock appointment to one of the most important jobs in the Government less than two years after quitting the Cabinet in disgrace.

The right-winger and vocal Brexiteer was brought into one of the top political posts after being forced to resign by Theresa May over secret meetings with Israeli officials, including prime minister Benjamin Netanyahu.

While on the backbenches she also offended Ireland when she appeared to suggest that the risk of food shortages on the island after a No Deal Brexit be used as diplomatic leverage against the EU.

Critics have also pointed out Harrow-born Ms Patel’s previous support for the death penalty, although she has more recently said she does not support it.

‘This is a recipe for another Windrush scandal that will damage the lives of ordinary people.’ 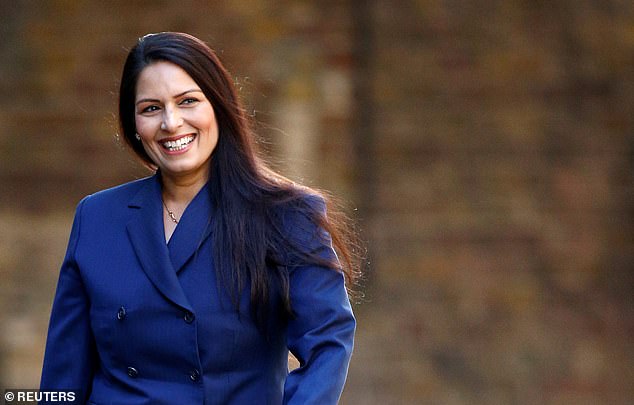 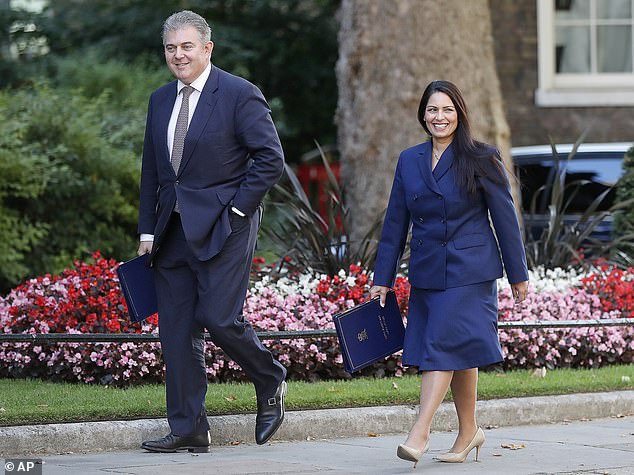 Last night she told Sky News it was a ‘great honour’ to be appointed Home Secretary, adding the role comes with ‘significant responsibilities’. 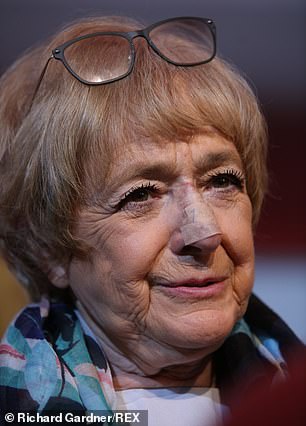 She said: ‘I will do everything in my power to keep our country safe, our people secure, and also to fight the scourge of crime that we see on our streets.

‘I look forward to the challenges that now lie ahead.’

But she received a cautious welcome by some Police figures.

‘It is a matter of record that she blocked our Twitter account some years ago – and refused to engage with us – for having the temerity to point out the folly and consequences of drastic cuts to policing.

‘Cuts which her boss the Prime Minister has vowed to reverse … in his first day in office.’

The daughter of Gujarati Ugandan Asian who fled the regime of Idi Amin follows Sajid Javid into the key domestic role.

She had been on the backbenches since quitting her aid role in November 2017 over secret meetings with senior Israeli figures, and acknowledged that her actions ‘fell below the high standards’ expected.

Ms Patel was humiliatingly forced to resign from the PM’s top team in November 2017 in a 30-minute face-to-face showdown after being ordered to return from an Africa tour.

Her flight back was followed by reporters and politics watchers live on Twitter as her plane approached London.

Her fate was finally sealed after two further secret meetings with Israeli officials emerged on top of the 12 that had already been revealed.

She also reportedly visited an Israeli military field hospital in the Golan Heights, a disputed area that Britain does not recognise, and failed to declare it.

In her resignation letter, Miss Patel said she was ‘sorry’ to have distracted from the government’s work and for lacking transparency.

She was replaced by Penny Mordaunt, who went on to become defence secretary and was herself sacked by Boris Johnson yesterday.

The SNP’s Stewart McDonald added: ‘If Civil Servants had done anything close to what Gavin Williamson and Priti Patel got sacked for they would never work for the government again.

‘A prime example of one rule for them and another for the rest. Stinks to high heaven.’

An ambitious Brexiteer and free market enthusiast from the right of the party, Ms Patel had been tipped for further promotion in a Cabinet in which Mrs May was keen to highlight female talent.

She was widely believed to harbour leadership ambitions, and some Westminster watchers regarded the ‘freelancing’ meetings with members of the Israeli government which led to her downfall as part of a possible drive to boost her personal contacts and standing ahead of an eventual pitch for the top spot.

After she stepped down from aid secretary she became an outspoken critic of the prime minister’s Brexit strategy, courting more controversy in December last year.

Speaking to the Times she appeared to suggest using the threat of food shortages in Ireland if there was a No Deal Brexit as a bargaining chip.

Leaked papers suggest Ireland would face foot shortages and a 7 per cent plunge in GDP if there was a sudden no deal in March.

Ms Patel told the Times: ‘This paper appears to show the government were well aware Ireland will face significant issues in a no-deal scenario.

‘Why hasn’t this point been pressed home during the negotiations? There is still time to go back to Brussels and get a better deal.’

Elected to Parliament in 2010 at the age of 38, Ms Patel achieved ministerial rank four years later as exchequer secretary to the Treasury, before promotion to employment minister following David Cameron’s 2015 general election victory.

She was one of the ministers who took advantage of Mr Cameron’s decision to allow members of his Government to argue on both sides of the EU referendum and played a prominent role in the Leave campaign.

Her appointment as international development secretary was greeted with concern by some in the aid community, who recalled that she had previously called for her new ministry to be replaced by a Department for International Trade and Development with greater focus on boosting UK business opportunities in the developing world.

Her views on the death penalty were thrust into the spotlight in 2011 when she used an appearance on Question Time to say she would ‘support the reintroduction of capital punishment to serve as a deterrent’ to ‘murderers and rapists’ who re-offend.

But in 2016, she told MPs that she did not support the death penalty.

The 47-year-old Witham MP was born in Harrow, north London, the daughter of parents who came to Britain from Idi Amin’s Uganda in the 1960s.

She studied at a comprehensive school in Watford before taking a degree in economics, sociology and social anthropology at Keele University and a post-graduate diploma in government and politics at Essex.