CHITRAL, PAKISTAN: More education, awareness and political action is needed to tackle climate change, the Duke of Cambridge has said as he visited a melting glacier in Pakistan.

The duke and duchess embarked on a trip to a remote location in the Hindu Kush mountain range in the north of the country for the third day of their royal tour. 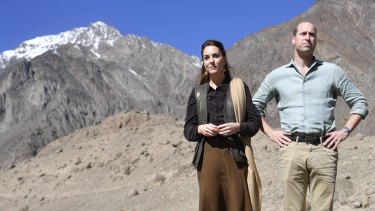 William and Kate overlooked the northern tip of the Chiatibo Glacier in Broghil National Park on Wednesday and were shown how it has retreated rapidly in recent years due to global warming.

"The young are starting to get engaged in it," he said, adding a "positive conversation" around climate change was required.

His geography background was also mentioned during the visit in the snowy mountain peaks, prompting amusement from the couple.

"Dr Warren my geography teacher would be well impressed that I'm back at a glacier after all these years," the duke said.

William appeared eager to learn more about the glacier, asking Bashir questions about its size and flooding.

The duchess wore a long taupe-coloured skirt and a darker coloured shirt under a leather vest for the visit.

She opted for flat knee-high brown boots suitable for the rocky terrain, and accessorised with gold earrings and a beige pashmina, while William wore a teal shirt and beige chino trousers. 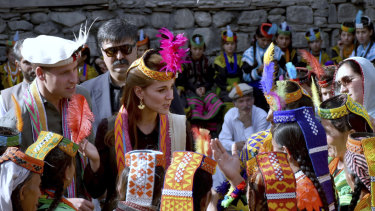 Prince William and Kate Middleton chat with women of the Kalash community during their visit to Bumburate Valley, an area of Pakistan’s northern Chitral district where glaciers are melting at a fast pace.Credit:Press Information Department via AP

They arrived by helicopter to the remote location in the Chitral district in the Khyber-Pakhtunkhwa Province.

Glaciers in the mountain range that joins together in northern Pakistan, the Hindu Kush, Karakoram and the Himalayas, provide water for 1.6 billion people.

More than 5000 reasonable sized glaciers are in the area but nearly 70 per cent of them are retreating, Bashir said.

Global warming has caused the Chiatibo Glacier to retreat by about 10m a year.

The first threat from the glacier melting is flooding to communities downstream and the second is removing the water supply completely, which provides for 200 million people in Pakistan.

In a speech on Tuesday evening, the duke urged the UK and Pakistan to "work together" amid an "impending global catastrophe" from climate change.

Following the glacier excursion, the couple will remain in the region to meet communities affected by climate change.