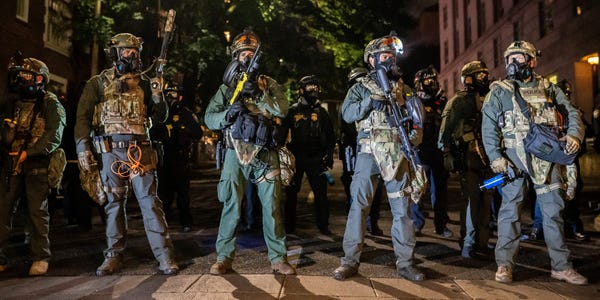 Protesters and local media in Portland, Oregon, reported that authorities in the city used tear gas against demonstrators on Friday and Saturday, just over a week after the city's mayor banned the local police force from using the gas, also known as CS gas.

According to the local NBC News affiliate KGW, demonstrators in the city arrived outside of the Immigration and Customs Enforcement building in the city on Friday at approximately 9 p.m. As the outlet reported, independent journalists at the protests reported through social media the use of tear gas by authorities.

Independent Portland-based journalist Garrison Davis tweeted that the tear gas has been utilized by agents with the Department of Homeland Security and Immigration and Customs Enforcement.

"Their operations are completely separate from ours," the department spokesperson told Newsweek.

The Department of Homeland Security did not immediately return Insider's request for comment on Sunday.

And in a tweet on Saturday, Wheeler also said that Portland police had complied with his order and did not use tear gas.

"I'm confirming today that Portland Police abided by my order banning the use of tear gas for crowd control during a protest Friday night in the South Waterfront neighborhood," he said. "I call on everyone in our community to step up and end the violence and to focus on advancing racial justice."

The PPB announced in a press release that 11 people had been arrested Friday into Saturday due to their failure to disperse.

Following Wheeler's September 10 decision to prohibit the use of CS gas, the Portland Police Bureau released its own statement that criticized the mayor's decision, as The Oregonian reported. According to the Friday report, Wheeler's decision and the police agency's subsequent public statement caused a spat between the mayor's office and the police organization he oversees.

As KGW reported, ongoing protests in the city that began in May with the police killing of 46-year-old George Floyd in Minneapolis had been paused due to the wildfires on the west coast. Activists once again took to the streets beginning on Friday as the air quality in the city began to improve.