Pope ducks questions on ‘cover-up’: Francis won’t answer claims he knew about US bishop’s misconduct after repeatedly calling for ‘forgiveness’ for church officials who hid sex abuse in Ireland

Pope Francis has refused to comment on claims by the former Vatican ambassador to the US that he knew about sex abuse allegations against an American bishop as long ago as 2013.

Speaking on his flight home after a two-day visit to Ireland, the Pope said the allegation of a cover-up by Archbishop Carlo Maria Vigano ‘speaks for itself’.

In Dublin the Pope repeatedly called for ‘forgiveness’ for past Catholic authorities involved in cover-ups, but on the plane he did not respond to the accusation that he himself had failed to address alleged misconduct.

Vigano, with whom the Pope has clashed in the past, claimed that Francis knew about allegations against Theodore McCarrick, the former archbishop of Washington, but rehabilitated him anyway. Pope Francis leaves Ireland on his plane, where he told reporters he would not comment on a former Vatican ambassador’s claim that he knew about accusations against a U.S. bishop

Vigano, 77, a conservative whose hardline anti-gay views are well known, urged the pope to resign over what he called Francis’ culpability in covering up McCarrick’s crimes.

Francis said the 11-page text by Archbishop Carlo Maria Vigano ‘speaks for itself’ and that he would not comment on it.

Francis accepted McCarrick’s resignation as cardinal last month, after a U.S. church investigation determined that an accusation he had sexually abused a minor was credible.

On his trip to Ireland the 81-year-old pontiff repeatedly addressed the historic sex abuse which sparked protests during his visit.

At a Mass in Phoenix Park to finish his two-day trip, he said: ‘We ask forgiveness for the times that, as a church, we did not show the survivors of whatever kind of abuse the compassion and the seeking of justice and truth through concrete actions. We ask for forgiveness.

Vigano, who was posted to the U.S. from 2011 to 2016, said his two predecessors had told the Holy See about the claims against McCarrick and that Vigano himself sent at least two memos.

His letter names Vatican cardinals and US archbishops who he says were informed about the McCarrick affair, saying the Vatican archives support his claims.

He said Pope Benedict XVI eventually sanctioned McCarrick in 2009 or 2010 to a lifetime of penance and prayer, and to no longer celebrate Mass in public or travel. 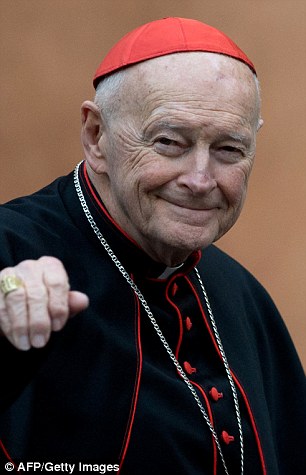 But he claims he was surprised to find McCarrick back on Church missions after Francis became pope in 2013, although the claim that Benedict sanctioned him is disputed.

It comes after the Vatican was blasted for its response to a Pennsylvania grand jury report which found more than 300 priests had abused children over 70 years.

‘Archbishop McCarrick, like any other person, has a right to due process. He looks forward to invoking that right at the appropriate time,’ he said in a statement.

Vigano’s letter also contains a lengthy diatribe about homosexuals and liberals in the Catholic church, targeting Francis’s known supporters in the U.S. hierarchy.

Vigano, however, also has had his own problems with allegations of cover-up, and he and Francis had a major dust-up during Francis’ 2015 visit to the U.S., which Vigano organized.

The cover-up accusation, which Vigano denied, concerned allegations that he tried to quash an investigation into the former archbishop of St. Paul-Minneapolis, Minnesota, John Nienstedt, who was accused of misconduct with adult seminarians.

Nienstedt was forced to resign over complaints about his handling of sex abuse cases.

In the 2015 clash a leading U.S. opponent of gay marriage, Kim Davis, was among those invited to meet with the pontiff at Vigano’s Washington residence.

Francis was so enraged that Davis’ supporters had leaked word of the meeting that the Vatican subsequently insisted he only held one private audience while there: with one of his former students, a gay man and his partner.