Victorian COVID-19 response commander Jeroen Weimar has apologised to Melbourne’s Jewish population after he mentioned members of the Orthodox community were among those who tested positive during a coronavirus briefing, saying it was a “poor choice of words”.

Mr Weimar, while describing on Wednesday the diversity of people who had caught COVID-19 in St Kilda and surrounding suburbs, mentioned that a member of the Orthodox Jewish community was among the positive cases. 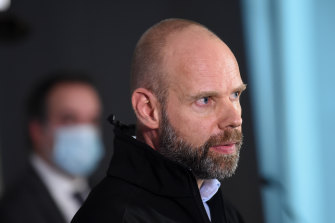 “We have accountants, we have architects, we have a sex worker, we have members of the Orthodox Jewish community, and we have a pizza guy who worked in a pizza shop in Glen Eira,” Mr Weimar said.

In a message sent to Dr Dvir Abramovich, chairman of the Anti-Defamation Commission, a Jewish-Australian community organisation, Mr Weimar said he was “hugely disappointed” his words were interpreted as a criticism of the Orthodox Jewish community.

“I am sorry for my poor choice of words yesterday,” Mr Weimar said.

“I was attempting to highlight the sheer diversity and range of people in the St Kilda area who were – through no fault of their own – COVID-19 positive.

Mr Weimar’s comments came after it was last week revealed that an engagement party was held in breach of strict coronavirus restrictions in Caulfield North, in Melbourne’s inner south-eastern suburbs. The video showed a gathering of people listening to a man giving an engagement speech to a crowded room of well-dressed guests at a private residence.

The video, which was sent by multiple sources from the Orthodox Jewish community to The Age, has been investigated by health authorities and several people who attended the event have been fined.

Jewish organisations reported an increase in anti-Semitic messages and social media posts after news reports about the engagement party.

Victoria Police Chief Commissioner Shane Patton said authorities were working out how to interview all the people who were at the party given they were isolating, but fines of $5452 each had been issued to the couple who were celebrating their engagement and the bride-to-be’s parents.

Mr Patton said the attendees of the party had been “very co-operative” with police.

“That investigation is still ongoing [and] it’s obviously hampered, to a degree by the fact that they’re in isolation,” Mr Patton said.

“The expectation is that every person who was present at that party will be interviewed [and] unless there’s an exemption that applies, that they would receive infringements.”

On Tuesday Premier Daniel Andrews stressed that his angry comments about the party were not a reflection on that community as a whole.

“We called out some bad behaviour yesterday, we didn’t call [out] a community, because that would be simply unfair and wrong, and it’s clearly evidenced by the fact that so many Jewish community leaders are stepping up and have condemned what occurred, and have done so in the clearest terms,” Mr Andrews said.

“I’ve spoken with many of them in the last 36 hours. And I thank them for their leadership.”