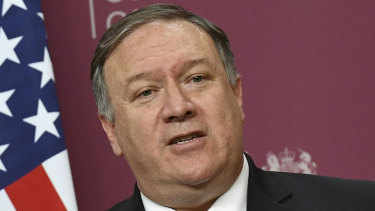 US Secretary of State Mike Pompeo speaks during a joint press conference with Britain’s Foreign Secretary Jeremy Hunt at the Foreign Office in central London.Credit:AP

Mike Pompeo warned that America would only share information on "trusted networks" as he hinted at the potential knock-on effects for intelligence sharing if Theresa May decided to give the Chinese technology company restricted access to British 5G.

The Trump administration has been lobbying European countries against allowing Huawei access into 5G networks, fearing China would have unrestricted access to the company's data streams.

It has created tensions with Britain, a partner in the Five Eyes intelligence-sharing pact, as May has privately backed giving Huawei restricted access to the network, as disclosed by The Telegraph. That leak led to the dismissal of Gavin Williamson as defence secretary.

Addressing the issue in a speech honouring Baroness Thatcher, Pompeo asked what the former prime minister would have thought of the challenges posed by China. 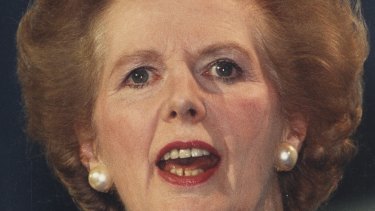 "Would she allow China to control the internet of the future?" he asked. "I know it's a sensitive topic but we have to talk about sensitive things as friends."

"As a matter of Chinese law, the Chinese government can rightfully demand access to data flowing through Huawei and ZTE systems.

"Why would anyone grant such power to a regime that has already grossly violated cyberspace?"

Earlier, alongside Hunt, Pompeo said "technical" discussions were ongoing between the two governments but America had made its views clear. British officials attempted to play down the differences, noting Pompeo said he was "confident" both nations would ensure network security.

Pompeo also disapproved of Britain's refusal to take back home-grown ISIS fighters captured on the battlefield, insisting that repatriating jihadists was a "key part" of defeating Islamic radicalism in the Middle East.

Pompeo admitted there had been "forthright" discussions behind closed doors on the Iran nuclear deal, from which America has withdrawn but which Britain still supports, and cited Winston Churchill when he said Iran must be confronted.

While referencing Churchill, who "stared evil in the face and recognised the threat that evil presented to the world," he stressed the US and UK were "on the same side".

At a press conference and speech after talks with May and Jeremy Hunt, the Foreign Secretary, Pompeo made clear that fundamental differences remained between the US and Britain.

When discussing the "special relationship" he appeared at pains to stress how closely the Trump administration valued the US-UK partnership.

Pompeo said the president was "eager" to sign a free trade deal after Brexit that would take their trading relationship to "unlimited new heights", however the protracted negotiations with Brussels ended.

He also took a public swipe at Jeremy Corbyn, the Labour leader, over his support of the Venezuelan government, saying it was "disgusting" that some politicians on both sides of the Atlantic were backing Nicolás Maduro, the country's embattled president.

Coming just a month before Trump arrives on a state visit, the remarks will leave No. 10 braced for criticism from the president himself.