Political scientist, 63, who ‘secretly worked for the Iranian government while lobbying U.S. officials and advised Tehran how to retaliate when America killed General Qasem Soleimani’ is arrested at his Massachusetts home

A Massachusetts-based political scientist and author is accused of secretly working for the government of Iran while lobbying US officials and advising Tehran how to retaliate when America killed Gen Qasem Soleimani, federal authorities said Tuesday.

Kaveh Lotfolah Afrasiabi, 63, was arrested by FBI agents at his home in Watertown, Massachusetts, on Monday, officials said. He is charged in New York City federal court with acting and conspiring to act as an unregistered agent of Iran.

An email seeking comment was sent to an attorney for Afrasiabi. Afrasiabi appeared before a Boston federal court judge via videoconference during a brief hearing and a detention hearing was scheduled for Friday.

Authorities said Afrasiabi, an Iranian citizen and lawful permanent US resident, has been paid by Iranian diplomats assigned to the Permanent Mission of the Islamic Republic of Iran to the United Nations (IMUN) in New York City since at least 2007. 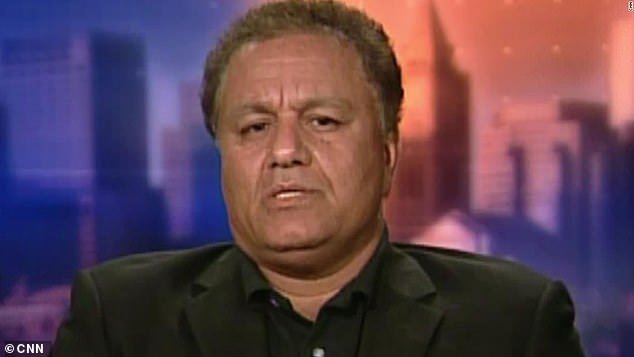 Afrasiabi has been paid approximately $265,000 in checks drawn on the IMUN’s official bank accounts since 2007, and has received health insurance through the IMUN’s employee health benefit plans since at least 2011, the Justice Department said.

According to the Justice Department, in the course of his employment by the Iranian government, Afrasiabi has lobbied a US congressman and the US Department of State to advocate for policies favorable to Iran.

Afrasiabi has long known that agents of foreign principals are required to register with the US Department of Justice, officials said.

‘Nevertheless, Afrasiabi did not register as an agent of the Government of Iran,’ the Justice Department added.

‘For over a decade, Kaveh Afrasiabi pitched himself to Congress, journalists, and the American public as a neutral and objective expert on Iran,’ said John C. Demers, Assistant Attorney General for National Security.

‘However, all the while, Afrasiabi was actually a secret employee of the Government of Iran and the Permanent Mission of the Islamic Republic of Iran to the United Nations (IMUN) who was being paid to spread their propaganda.

‘In doing so, he intentionally avoided registering with the Department of Justice as the Foreign Agents Registration Act required. He likewise evaded his obligation to disclose who was sponsoring his views. We now begin to hold him responsible for those deeds,’ Demers added. 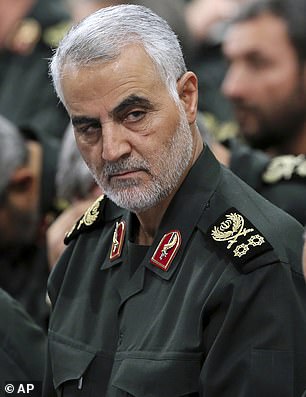 In January 2020, Afrasiabi reportedly emailed Iran’s Foreign Minister with advice for ‘retaliation’ for the US airstrike that killed Major General Qasem Soleimani (pictured)

In his writings, Afrasiabi appeared to use Iranian regime talking points. In 2013, Afrasiabi discussed ‘rebooting US-Iran relations’ in the Boston Globe. He also touted the Iran nuclear deal as a historic milestone.

In 2009, Afrasiabi helped an unidentified congressman draft a letter to President Barack Obama about US and Iranian nuclear negotiations, according to court documents.

After the January 2020 US military airstrike that killed Gen Qassem Soleimani, the head of Iran’s elite Quds Force, Afrasiabi told Iran’s foreign minister and permanent representative to the United Nations that Iran, in response, should ‘end all inspections and end all information on Iran’s nuclear activities pending a (United Nations Security Council) condemnation of (the United States’) illegal crime,’ according to court documents.

Doing so will ‘strike fear in the heart of enemy’ and ‘weaken Trump and strengthen his opponents,’ Afrasiabi wrote, according to court documents.

‘Mr Afrasiabi never disclosed to a Congressman, journalists or others who hold roles of influence in our country that he was being paid by the Iranian government to paint an untruthfully positive picture of the nation,’ William Sweeney, assistant director-in-charge of the FBI’s New York Field Office, said in a statement.

The Justice Department said that ‘Afrasiabi has admitted in his own communications that his extensive body of published works and television appearances, in which he has consistently advocated perspectives and policy positions favored by the Iranian government, has been attributable to the funding he receives from the Iranian government’.

For example, in a July 28, 2020, email to Iran’s Foreign Minister, Afrasiabi included ‘links for many of [his] works, including books, hundreds of articles in international newspapers and academic journals,’ telling Iran’s Foreign Minister: ‘Without support none of this would have been possible! This has been a very productive relationship spanning decades that ought not to be interrupted.’

If convicted of both charged offenses, Afrasiabi faces a maximum sentence of 10 years in prison.