Policeman, 39, who was found dead with his three year-old son after cutting short his holiday was from ‘a typical happy family’, heartbroken neighbours reveal

A policeman and his three-year-old son who were found dead after coming home from holiday were part of a ‘typical happy family’, neighbours say.

David Louden and his three-year-old son, who were found dead at their home in Kidderminster, Worcestershire, had just returned early from a family holiday.

A neighbour said Mr Louden, 39, had been away with wife Samantha, their son Harrison and another relative – but the trip was cut short.

It appears that only the father and son had returned to the house.

Concerns for their safety led to police finding the bodies in the semi-detached property in Cairndhu Drive shortly before 9.30am on Friday.

A neighbour told The Times: ‘They just seemed like a typical happy family. Dave would say ”hello” to my husband when he was in the garden and we’d see him getting into his car to go to work.’

Another said Louden would wave to her while she was walking the dog, adding: ‘They seemed a typical family who kept themselves to themselves. It’s heartbreaking but no one knows what happened.’

One neighbour said: ‘Samantha came back to the house and took out a couple of bags of belongings. She was there with a family friend and they spent several hours in the house before leaving. 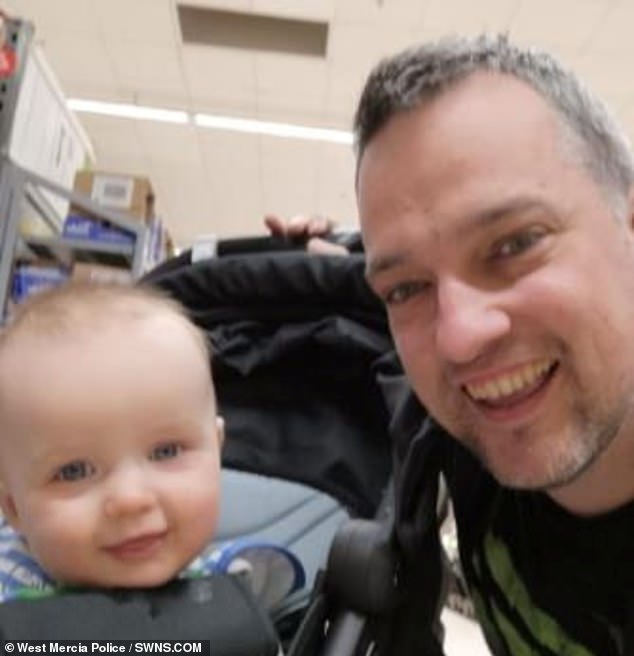 A neighbour said David Louden, 39, had been away on holiday with wife Samantha, their son Harrison and another relative but the trip was cut short

‘The couple haven’t lived in the house for long but I understand they have another child so she was probably collecting some clothes and toys.

‘It must have been awful for her to go into the house where her husband and son were found. I cannot imagine the pain they are going through.’

Door-to-door police inquiries have focused on events inside the house the previous evening.

West Mercia Police have released no further details of how the father and son died and have so far referred to both deaths as ‘unexplained’. It is not known if post-mortem examinations have yet been carried out.

On Sunday police named the dead officer and his son and released a family photo alongside a tribute. Mrs Louden, who is also a police officer, and their wider family said in a statement: ‘David was a kind, loving, considerate, amazing father, husband, son, brother, uncle, friend and colleague. Harrison was a happy, well-loved little boy. They will both be forever missed and loved.’ 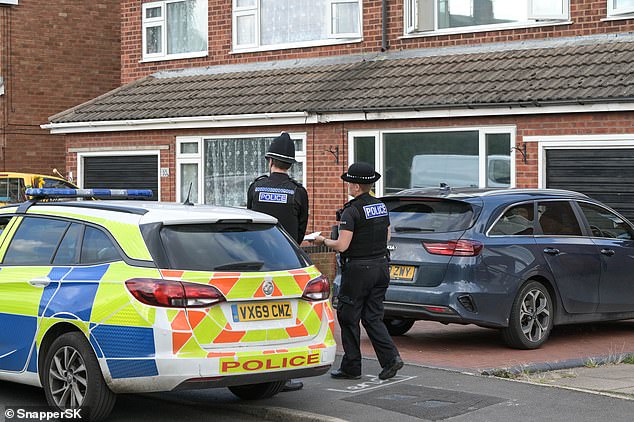 West Mercia Police have released no further details of how the father and son died and have so far referred to both deaths as ‘unexplained’. It is not known if post-mortem examinations have yet been carried out

Mr Louden was a sergeant with West Mercia Police and is believed to have met his wife through work. Colleagues paid tribute to the dedicated officer on social media.

One wrote: ‘Such a tragic loss to those closest to you, the community you served. Rest easy now with your boy, your duty done.’

Helen Greybanks wrote: ‘SGT it was an honour and a pleasure to work alongside you.’ And Laura Davies said: ‘Rip Dave and baby Louden. You were so kind and caring. Be missed by all. My love is to you and your family.’

Many tributes have been laid at the scene in Cairndhu Drive including teddy bears and bouquets. One read: ‘Both lives gone too soon.’

Sharon Hyrons, who has lived in the area since she was a child, said: ‘I was so shocked about the news, I came back to lay some flowers… I have never seen anything like this before.’

Another bouquet read: ‘So sorry for your loss and we are thinking of you, my heart goes out to you all.’