London: There have been violent scenes in the British city of Bristol where protesters have stormed a police station and abused police officers, two of whom have been taken to hospital with broken bones. 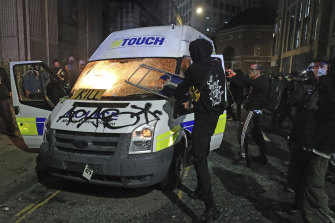 Police said several hundred people gathered outside the Bridewall police station in Bristol, in England’s south-west, after an earlier protest against a proposed new law aimed at expanding police powers to restrict demonstrations.

The laws have been proposed by the government to better control protests and clamp down on the deliberately disruptive tactics used by groups such as Extinction Rebellion. One of the law’s measures would impose up to 10 years’ jail for damaging a memorial, which follows the toppling of a statue of slave trader Edward Colston in Bristol last year.

Some demonstrators carried placards with slogans such as “Kill the Bill”, “The Day Democracy Became Dictatorship” and “We Can’t Be Silenced That Easy”. 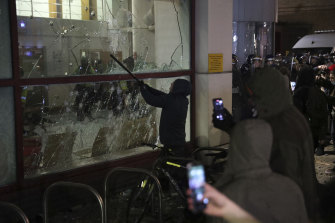 A protester smashes a window with a stick outside Bridewell Police Station, in Bristol.Credit:AP

It follows an outcry in Britain over the heavyhanded police tactics used by the Metropolitan Police against women attending a vigil-turned-protest at Clapham Common in London’s south-west, in memory of Sarah Everard who was killed while walking home, allegedly by a serving police officer who will face trial charged with her kidnap and murder.

Gatherings are currently prohibited under restrictions imposed across Britain for several months aimed at curbing the spread of COVID-19.

Chief Superintendent Will White from Avon and Somerset Police said the peaceful protest against the law turned into a “violent disorder” because of the actions of a small minority who set fire to two police cars and damaged the building.

White said of the two police officers who were taken to hospital, one suffered a broken arm and the other broken ribs. 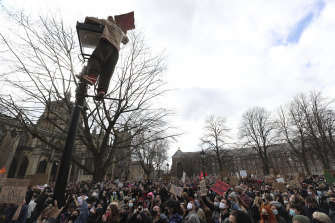 Protester gather earlier in the day for the ‘Kill the Bill’ protest in College Green, Bristol.Credit:AP

“These scenes are absolutely disgraceful … officers have been subjected to considerable levels of abuse and violence,” White said.

“All those involved in this criminal behaviour will be identified and brought to justice.

There will be significant consequences for behaviour such as this,” he warned.

He said extra police from neighbouring forces were called in to help quell the riots.

Home Secretary Priti Patel who is ushering in the new law said the scenes in Bristol were “unacceptable.”

“Thuggery and disorder by a minority will never be tolerated,” Patel said in a tweet.

The Labour opposition had planned to abstain on the bill when it is put before the Commons but following the backlash after the vigil for Sarah Everard said they would oppose the proposed law.

Labour figures rushed to condemn the violent scenes. Marvin Rees, the mayor of Bristol said while he also held “major concerns” about the Police, Crime, Sentencing and Courts Bill, the “lawlessness on show will be used as evidence and promote the need for the bill.”

“Smashing buildings in our city centre, vandalising vehicles, attacking our police will do nothing to lessen the likelihood of the bill going through,” Rees said.

“On the contrary, the lawlessness on show will be used as evidence and promote the need for the bill.”

“Tonight will make our job as MPs opposing the Police Bill that much harder,” said Kerry McCarthy, the Labour MP for Bristol East.

“It is totally wrong and counterproductive to respond to the government’s proposed draconian limits on protest through descending into violence against the police,” Lammy said.

The bill was proposed before the backlash over police’s tactics at Clapham and had been set to sail through the Commons with little attention, however has been under intense scrutiny since the events at Clapham Common.