The road outside Parliament could be closed permanently to prevent further terrorist attacks on Westminster.

The proposal to bar traffic from Abingdon Street would build on enhanced security measures already in place.

Parliamentary authorities are currently in talks with the Home Office and Mayor of London about a feasibility study for the plan.

The approach is seen as a more realistic measure than closing down the entirety of Parliament Square, which is a major arterial route. 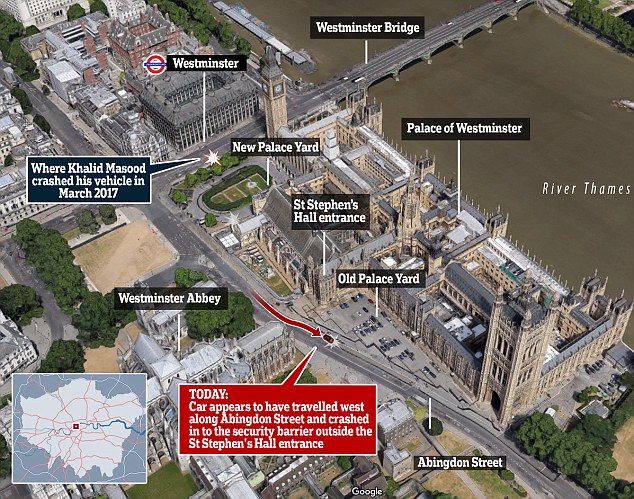 Work on the plans began before the murder of PC Keith Palmer, who was stabbed to death in March last year by Khalid Masood outside the Palace of Westminster.

Security around the building has been ramped up since the attack and the London Bridge and Borough Market atrocities, with barriers put in places on many bridges.

Following a review of the perimeter, the number of armed officers on patrol has significantly increased.

Onlookers and parliamentary workers were struck yesterday by how quickly teams of armed officers were on the scene, swarming around the crumpled Ford Fiesta seconds after the attack.

In contrast there were no armed guards to stop Masood when he ran over pedestrians on Westminster Bridge.

The British Muslim convert managed to rush through the main entrance Carriage Gate, which was open at the time because MPs were voting.

The bollards and barriers put in place since to stop terrorists mowing down pedestrians has raised concerns that Parliament is in danger of losing its World Heritage status Armed guards have since been stationed at the checkpoint since the attack last March but there are also calls for a police dogs as well.

In the wake of the attack, Sir Jon Murphy, a former chief constable of Merseyside Police, was asked to look at security and recommended a string of changes. 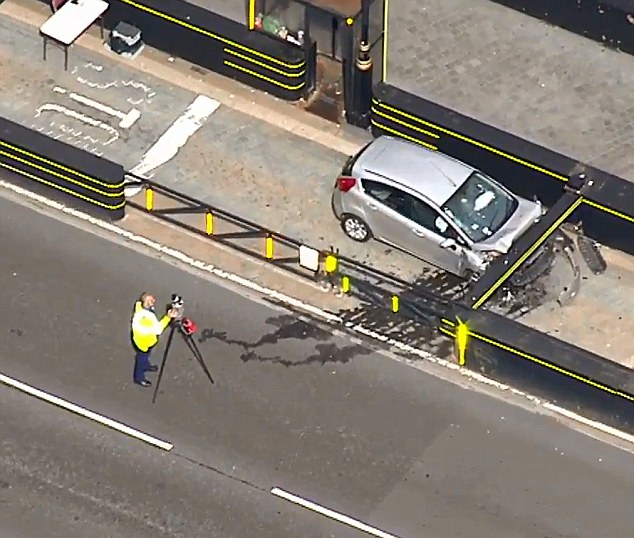 The former officer briefed the Speaker’s Security Committee about his key recommendations behind closed doors last July, with no hard copies allowed to leave the room.

But his recommendations are said to include strengthening the armed presence at key checkpoints.

In the aftermath of the 7/7 attacks, new truck bomb-proof barriers were installed in an effort to ‘target harden’ Westminster.

These include the reinforced low black rampart-like walls that surround Parliament itself. 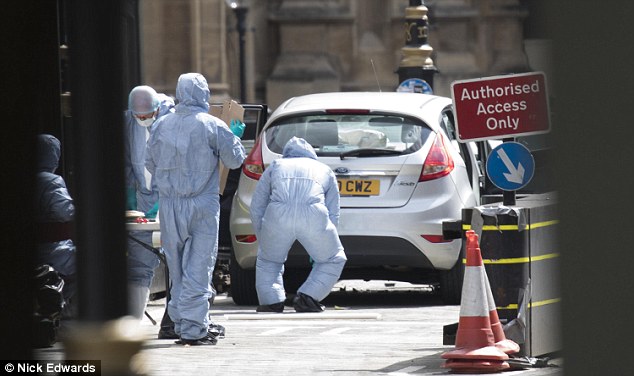 Forensics officers have spent the say getting evidence from the Ford Fiesta, which was bought just two months ago

It is understood that Sir Jon also recommended installing a physical barrier in the river, known as a boom, next to Parliament that could stop boats from approaching.

Tourist boats and commercial vehicles often pass by the Thames adjacent to one side of Parliament. MPs and peers use the terraces next to the river for socialising.

Security figures within Parliament were supportive of installing a barrier, pointing to similar measures at other landmarks along the river.

Mayor of London Sadiq Khan included a plan for part- pedestrianisation of the area around Parliament in the manifesto he was elected on, while others have proposed similar schemes in the past Such a move is being backed by some in Parliament but planning permission means it could take years. 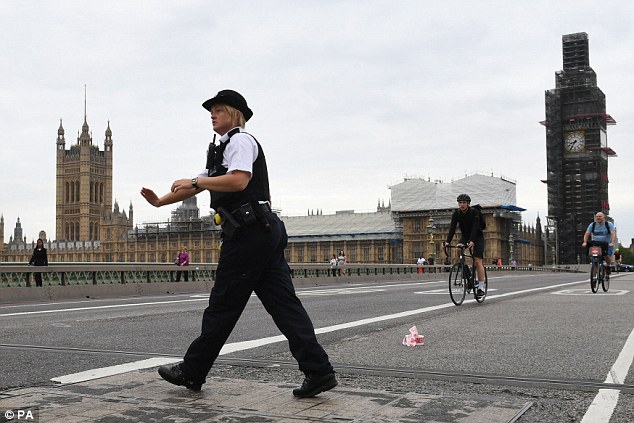