Yet another clean-up is underway in Paris after Yellow Vest activists brawled with police, set fire to a bank and ransacked shops in resurgence of protests that started four months ago

Paris is recovering again today after the 18th weekend of protests saw 10,000 Yellow Vests surge to the French capital before luxury stores, restaurants and a bank were looted and torched.

A mass cleanup began this morning after luxury shops and restaurants on the Champs Elysee, including Boss menswear and the handbag store Longchamp were destroyed by protesters.

Fouquets, a restaurant frequented by politicians and celebrities, was also targeted.

The Gillette Jaunes, otherwise known as yellow vests, returned to the streets of Paris yesterday to continue their four-month long protest which began as a campaign against President Emmanuel Macron’s fuel tax but morphed into violent riots against elitism. 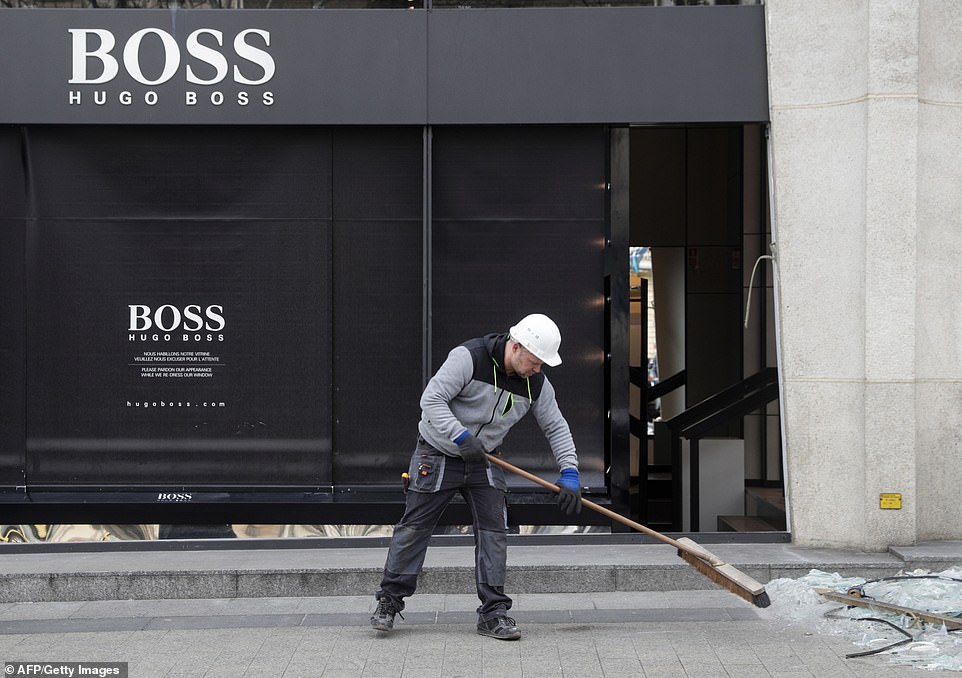 A mass cleanup began this morning after shops, including Boss menswear and luxury handbag store Longchamp, as well as Fouquets, a restaurant frequented by politicians and celebrities, were destroyed by protesters. 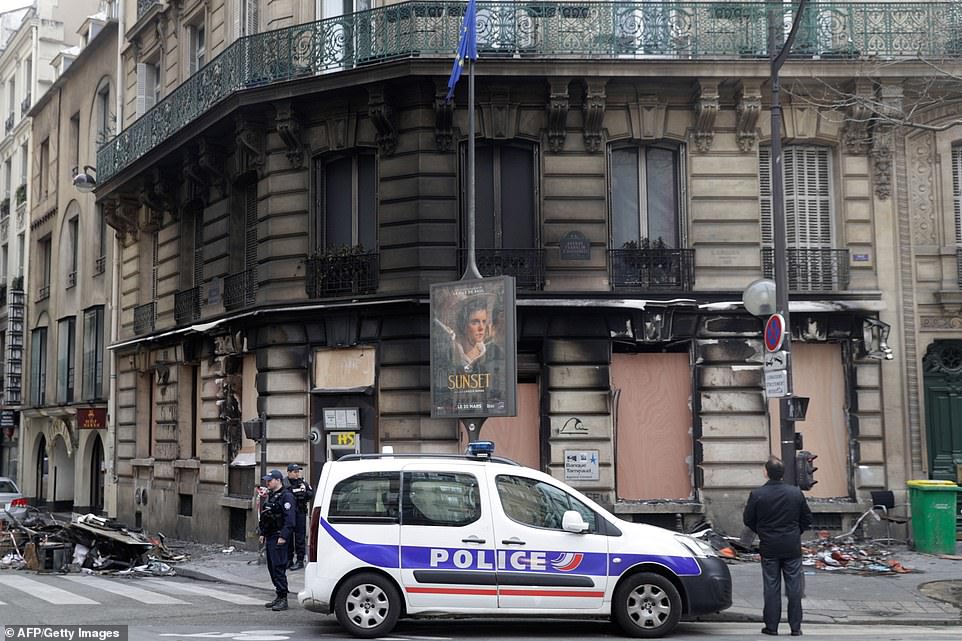 A bank underneath a block of apartments was set alight during the riots. Two fire fighters are among 11 people being treated for minor injuries Protesters were seen vandalising and later setting fire to Fouquet’s brasserie, a favourite hangout of the rich and famous for the past century – as well as luxury handbag store Longchamp, a bank, another restaurant and several news stands

More than 10,000 people descended on the streets of the capital resulting in clashes with police, the bank below an apartment block being set alight and the destruction of luxury shops.

Some 1,400 police officers were mobilised and 120 arrests made to try to stem the violence.

Meanwhile 32,300 people took park in a peaceful protest against climate change in the city.

The French president was forced to cut short a skiing trip in the Pyrenees to return to Paris for a crisis meeting. Clean up teams are now attempting to repair and restore the shops that were covered in graffiti, smashed and looted 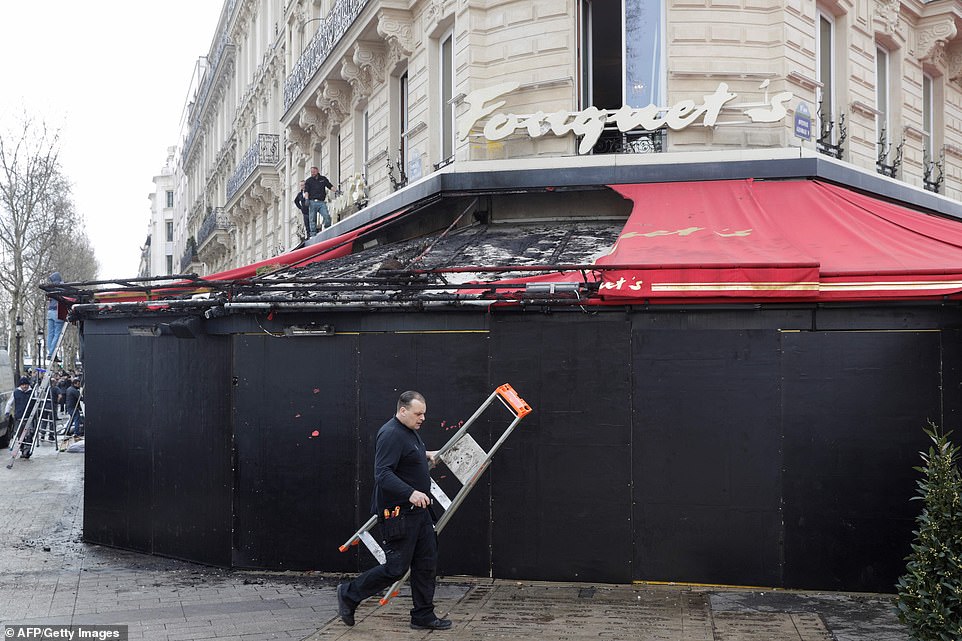 Businesses on the famed Champs-Elysees avenue in Paris were destroyed on the 18th weekend of French protests.

Macron is now due to hold an emergency meeting at the interior ministry, his office said.

Protesters were seen vandalising and later setting fire to Fouquet’s brasserie, a favourite hangout of the rich and famous for the past century – as well as luxury handbag store Longchamp, a bank, another restaurant and several news stands. Some luxury stores were completed destroyed during the violent protest as shops were smashed, looted and burned down 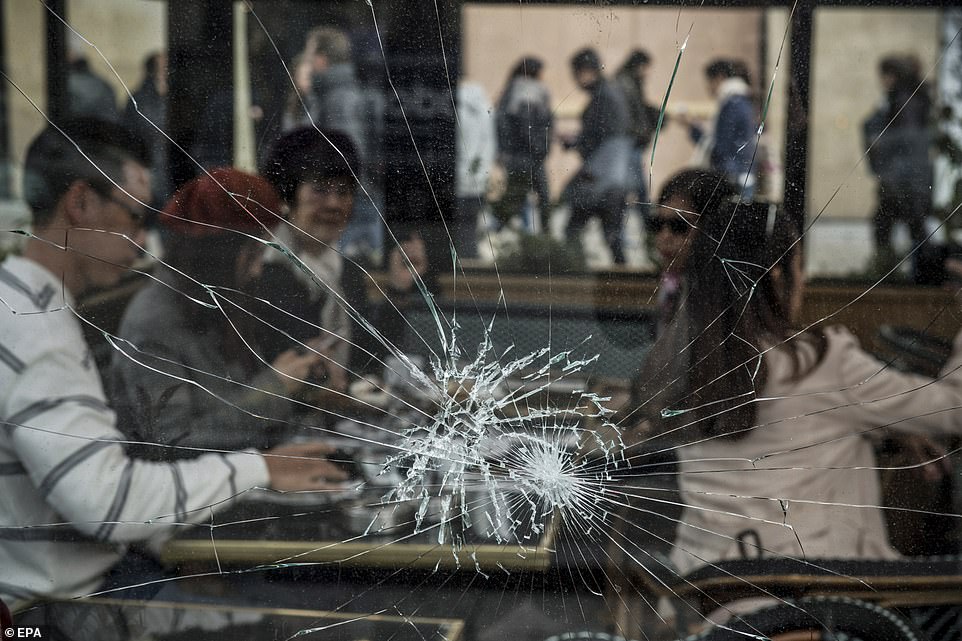 ‘Today’s actions are not the work of protesters, but of looters, arsonists and criminals. No cause justifies this violence,’ he added.

In a statement, the national police denounced the ‘mindless violence, cowardly attacks’ and stressed their determination to guarantee public order against ‘provocateurs and vandals’.