Only 300 migrants will be sent to Rwanda a year under the government’s controversial scheme, according to a Home Office model.

The £120m agreement was announced last month, with Boris Johnson saying ‘tens of thousands’ would be sent to Rwanda under the deal.

Home Office modelling, however, suggests the programme will be on a tiny fraction of the scale suggested initially by the prime minister.

The policy – which will send adult migrants who are ‘inadmissible for asylum’ off to Rwanda for their cases to be processed – was presented last month as a solution to the Channel crossing problem.

Over 7,300 migrants have crossed the Channel this year alone, marking a threefold increase in the rate of arrivals compared with last year. 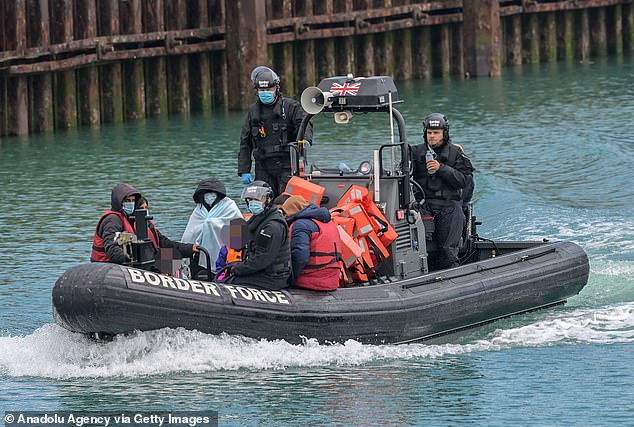 Only 300 migrants will be sent to Rwanda a year under the government’s controversial scheme, according to a Home Office model – despite the prime minister saying ‘tens of thousands’ would be removed each year under the £120m agreement 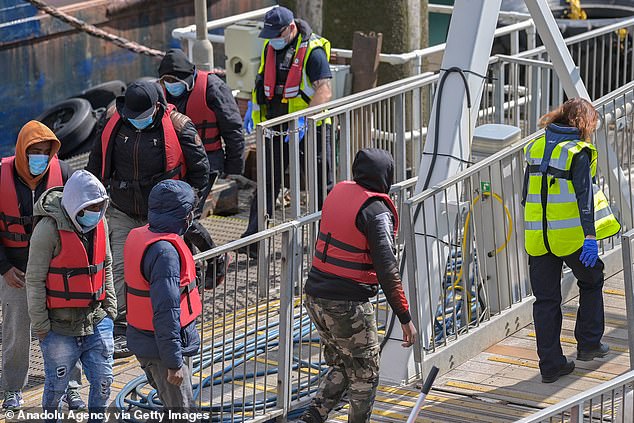 According to official figures released by the Ministry of Defence (MoD), 761 people have been detained after trying to cross the English Channel in May, with around 20 migrants having already reached British soil today.

They were led along the gangway for processing by soldiers dressed in camouflage fatigues and high-vis vests.

This comes after Thursday (May 5) saw 65 migrants make the treacherous journey across the Dover Strait in two boats, according to official figures.

This figure is set to continue rising as people smugglers take advantage of the calm conditions at sea.

Boris Johnson has defended the Rwanda policy from fierce criticism, with the Archbishop of Canterbury Justin Welby among the scheme’s most prominent detractors.

The prime minister said the Rwanda programme would stop people-smuggling gangs exploiting the vulnerable, who risk ending up in a ‘watery grave’ as they cross the choppy and treacherous Channel.

Enver Solomon, chief executive of the Refugee Council, hit out at the policy, saying the Home Office analysis was a sign of its internal weakness.

Mr Solomon told The Times: ‘The government’s desire to treat people as human cargo expelling them to Rwanda is not only appallingly unprincipled, it is also unworkable.

‘The government now seems to be realising that the challenges of making it a reality are far greater than it had anticipated. 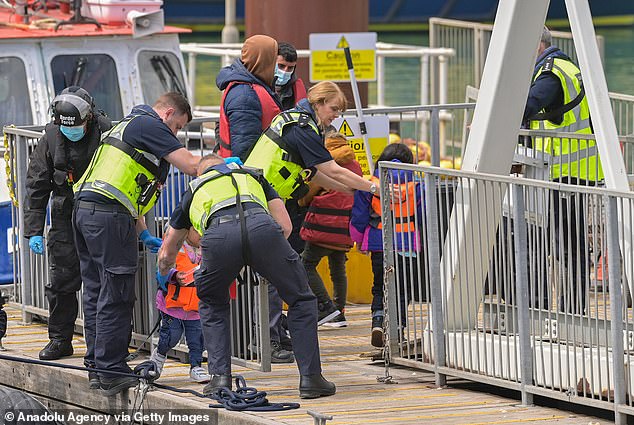 ‘There’s a likelihood that it could easily unravel and certainly never be on a scale the prime minister said it could be.’

The Home Office analysis estimated only 300 people would be sent to Rwanda a year by comparing the number of migrants who were categorised as ‘inadmissible’ for asylum under a previous EU system that applied in Britain pre-Brexit.

Under the EU’s Dublin Regulations, which stopped applying to the UK after December 31 2020, identical ‘asylum admissibility’ rules were used to sort migrants as will be used in the new Rwanda scheme.

Fewer than 300 asylum seekers a year were branded ‘asylum inadmissible’ in the final six years of Britain’s tenure under the Dublin Regulations.

A government spokesperson said they did not recognise the Home Office analysis, however, and emphasised that the number who could be sent to Rwanda was ‘uncapped’.

The spokesperson said that one of the criterion for labelling someone ‘asylum inadmissible’ was the realistic chance of being able to remove them to a safe country, meaning that the Rwanda deal had raised the probability of many falling into this classification.

In a statement, they said: ‘The entire government is united in our efforts to prevent lethal crossings, save lives and disrupt illegal migration.’

In the first three days of May alone, almost 700 people crossed the 21-mile stretch of water.

Sunday (May 1) saw 254 migrants make the treacherous journey in seven boats, while 293 people reached the UK by small boat on bank holiday Monday (May 2).

Tuesday (May 3) also saw a significant number of migrant arrivals, with 149 people being detained by UK officials after crossing the Channel.

No migrant crossings took place on Wednesday (May 4) but a search operation was conducted in the Channel after passengers on a P&O ferry spotted floating debris in the sea – understood to be a wooden boat – and raised the alarm.

What is the Rwanda scheme?

What is the scheme?

The Government announced plans to send thousands of migrants to Rwanda, in east Africa, last month.

The scheme is designed to deter economic migrants by showing even if they reach the UK, they’re not allowed to remain here.

When they arrive in Rwanda, asylum seekers will have their claims processed and if approved, will be allowed to stay in Rwanda. They will not be allowed to return to the UK.

Those who fail in their asylum applications will be deported back to their home country.

People arriving in the UK illegally, including in small boats and lorries, will be considered for relocation to Rwanda.

It will apply to anyone who arrived in the UK from January 1, this year, and not just people arriving after the first flights have been arranged.

Ministers have said the scheme is meant to be focused on single, young men, but anyone regardless of sex is eligible.

The Government says families will not be broken up and unaccompanied children will not be sent.

How much will it cost?

The Government says the scheme will cost £120 million, but critics have predicted it would cost considerably more.

Think tank the Institute for Public Policy Research pointed out that Australia’s scheme has cost taxpayers around £5.2 billion since 2013.

Conservative former minister Andrew Mitchell said housing asylum seekers at the Ritz hotel would be cheaper, putting the figure at £2million per person, per year.

When will it start?

Boris Johnson said he wanted the first flights to leave at the end of May, but this looks unlikely to happen.

The scheme is likely to be challenged in court by human rights lawyers, but ministers believe it is legal under UK and EU laws.

Why is it so controversial?

Human rights groups, opposition MPs and backbench Tories have said the plan is cruel and expensive.

Amnesty International says there are concerns over enforced disappearances, allegations of torture and excessive use of force’ in Rwanda.

The Government says Rwanda is a safe country with a track record of supporting asylum seekers.

Opposition leader Keir Starmer branded the PM ‘desperate’ and said the plans were ‘unworkable, extortionate and will cost the taxpayer billions of pounds’.