Cairo: A fight between two train conductors unleashed a speeding, unmanned train that slammed into a barrier and exploded in the Egyptian capital's main train station, killing at least 25 people, authorities say.

At least 47 people were also injured, many of them critically. 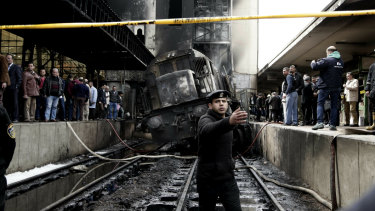 Police guard the front of a damaged train inside Ramses train station in Cairo, Egypt.Credit:AP

The deadly blaze blasted through people on the platform in the busy Ramses Station in downtown Cairo.

A surveillance video showed the moment of impact when the car barrelled past bystanders and engulfed them in flames. Charred bodies lay on the platform and a man in flames ran down a staircase in panic.

The health minister, Hala Zayed, said authorities had not been able to identify many of the bodies recovered because they were too badly burnt.

Egypt's prosecutor General Nabil Sadek said the train conductor had left his car to fight with another conductor whose railcar was blocking his.

But the conductor left without putting on the brakes and the other car began moving backward, freeing the locomotive, which then gathered speed and hit the concrete-and-metal barrier, exploding.

"The driver left the railcar without taking any measures to brake," Sadek said.

The driver of the railcar has been under interrogation and Sadek said the investigation was continuing. 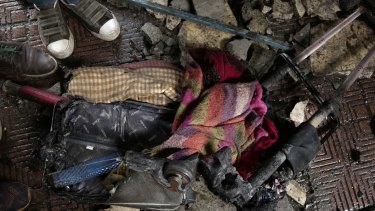 The Ramses district is among the busiest and most crowded areas of Cairo, and the accident briefly halted all train traffic and prompted an evacuation.

The accident triggered debate among many Egyptians, with many blaming the government for not improving railway services in Egypt, even after a series of deadly accidents. Several noted previous statements by President Abdel-Fattah el-Sissi arguing about spending billions of pounds on improving trains.

The deadliest train crash took place in 2002 when more than 300 people were killed when fire erupted in a speeding train travelling from Cairo to southern Egypt.