It is called the World Naked Bike Ride and sure, many participants in this traditional Melbourne event on Sunday were in it to get their kit off in public and have fun.

‘As Bare As You Dare’ was its slogan, and gathering in the Edinburgh Gardens, in Fitzroy North, before the start, one participant was (half) dressed as Santa and many wore only helmets and runners. 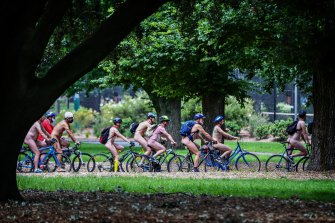 Participants in the the World Naked Bike Ride in Melbourne enjoy lovely parkland and a refreshing spring breeze.Credit:Paul Rovere

Some donned body paint images of flowers and rainbows, or cheeky slogans such as ‘Sorry Mum’, and ‘Nude Is Not Rude’.

Sunshine blessed their 10km route through Fitzroy, Carlton and the CBD.

But there were serious themes. One of the organisers, Michael, who did not want to give his surname, said it’s about body positivity, saving the environment, and drawing attention to cyclists’ vulnerability.

“A number of people taking part have got scars on their body from being hit by cars,” he said. Among them was cyclist Nick, 38, of Carlton, who has suffered two accidents in recent years. 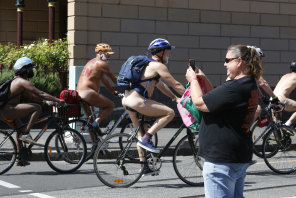 What was that? An onlooker snaps participants in the World Naked Bike Ride in inner Melbourne on Sunday.Credit:Paul Rovere

He once suffered a torn anterior cruciate ligament and a torn meniscus after a distracted driver in Carlton didn’t stop at a roundabout and collided with him.

And another time in Kew, a car ran through a stop sign and pushed Nick onto tram tracks, narrowly missing a tram. The driver “was upset that I’d scratched his car” Nick said.

First time ride participant Hanna Zysnarska, 36, dressed in a toga with body paint on her chest, said she wasn’t nervous. She said in her native Poland a naked bike ride would be forbidden.

Her partner Jared Bialkoswski said the couple wore wool togas because of the cold — it was a mild 22 degrees but with a cool breeze.

Dearne Weaver, 58, drove from the ACT with her partner Scott Berry, 56, to take part. Her body was painted with the words ‘Girl Power’, and with hearts and rainbows.

Ms Weaver felt the event was a safe place to promote body positivity and non-sexual nudity, and to challenge sexual judgment and objectification of women.

She said the ride was also great fun. One year, the group accidentally photo bombed a wedding party posing outside a CBD building, but the newly betrothed couple smiled and laughed. 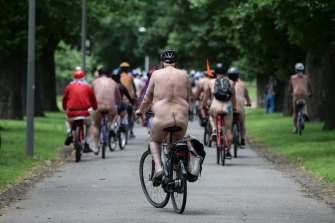 Ride organiser Michael, 59, said it was “great to be back”. While the March 2020 ride went ahead just before the COVID-19 pandemic, the 2021 ride was postponed for nine months.

Michael said some participants had been through difficult times, so Sunday was “an opportunity, I suppose, to have a bit of freedom”.

Michael said while there was the odd incident of abuse and disapproval, most onlookers to the ride, once they got over the shock at the nudity, smiled and clapped. “The reaction is almost always positive,” he said.