Chinese rescuers have pulled 11 gold miners to safety, 14 days after they were trapped 2,000 feet underground by an explosion.

Footage showed the first miner to be rescued, a black blindfold across his eyes, being lifted out of a mine shaft in the morning.

The miner was extremely weak, state broadcaster CCTV said on its Weibo site. Rescue workers wrapped the barely responsive man in a blanket before taking him to hospital by ambulance.

The men had been trapped underground for the past two weeks after an explosion on January 10. One miner has died.

In this photo released by Xinhua News Agency, rescuers carry a miner who was trapped in a gold mine in Qixia City in east China’s Shandong Province, Sunday 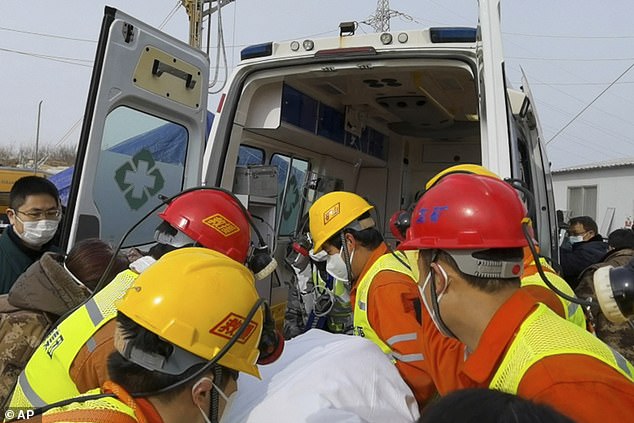 Over the next few hours, 10 miners from a different section of the mine, who had been receiving food and supplies from rescue workers last week, were brought out in batches.

One was injured but several of the others were shown walking, supported by rescue workers and wearing black cloth over their eyes, before leaving the site in ambulances.

22 workers were trapped about 2,000 feet underground in the Hushan mine by the January 10 blast in Qixia, a major gold-producing region under the administration of Yantai in coastal Shandong province. 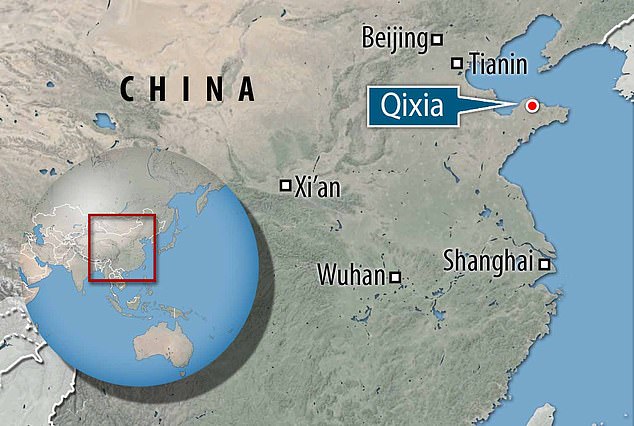 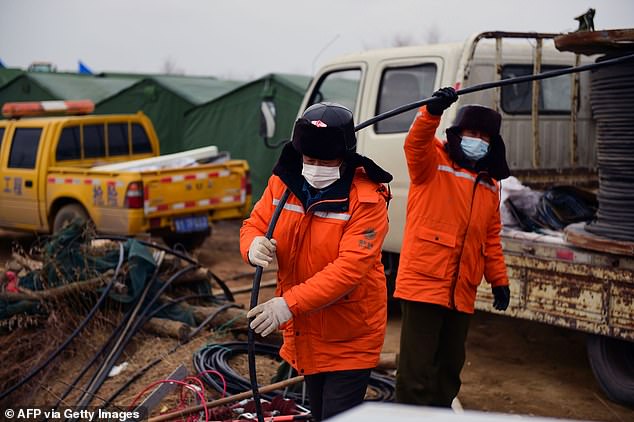 Members of a rescue team working at the site of a gold mine explosion where 22 miners are trapped underground in Qixia, in eastern China’s Shandong province

Officials said on Thursday it could take another two weeks to clear ‘severe blockages’ before they could drill shafts to reach the group of 10 who had been receiving supplies of food from the rescue team.

State media said earlier however that the more than 600 rescuers on site were hoping to reach the men in the mine’s fifth section on Sunday.

The men were said to be in good physical condition and had been receiving normal food since Saturday, after several days of living off nutrient solutions, according to Xinhua.

On Sunday evening, the trapped miners sent up a handwritten note saying they were still alive, according to Chinese state media.

After days without any signs of life, rescuers heard knocking sounds on Sunday afternoon as they drilled through the mine’s shaft near the city of Qixia. 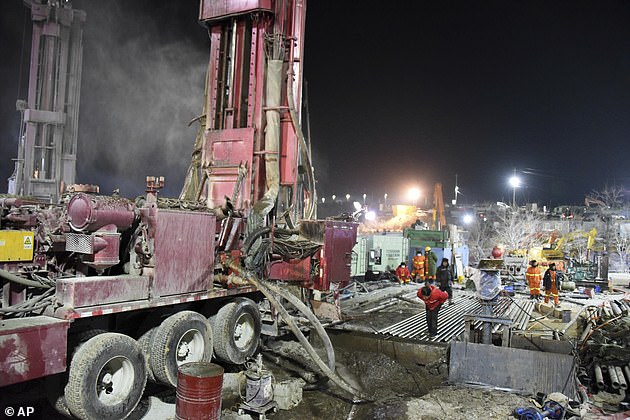 After days without any signs of life, rescuers heard knocking sounds on Sunday afternoon as they drilled through the mine’s shaft. Rescuers are pictured drilling a new channel on Monday

CCTV reported that rescuers sent oxygen and basic supplies, including pencils and paper, down the mine at around 10pm.

Half an hour later, they noticed that someone was pulling a steel line they had sent down from under the ground.

An hour afterwards, rescuers retrieved a note from the depths, saying that at least a dozen of the miners were still alive.

The surviving workers pleaded for help, adding that some workers’ health was deteriorating and the conditions of the mine were worsening.

‘We are in urgent need of medicine, painkillers, medical tape, external anti-inflammatory drugs, and three people have high blood pressure,’ the note read.