Dakar: President Donald Trump's addition of four African countries to his administration's travel ban could fuel discrimination and stifle business, leaders warned on Saturday as people across the continent reeled at the news.

Most citizens of Nigeria – Africa's most populous nation and biggest economy – and Eritrea would be blocked from coming to live and work in the United States under the measure, which takes effect February 22, while Tanzania and Sudan would be barred from the competitive US visa lottery. 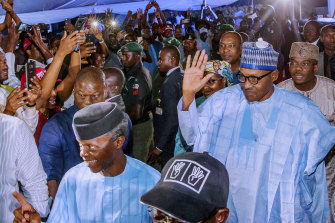 The White House called the new restrictions "the height of common sense" in a statement, adding that foreign countries must "satisfy basic security conditions" before their citizens could move to the United States.

Most citizens from Myanmar and Kyrgyzstan would also be banned under the new measure.

After Trump's announcement, Nigerian President Muhammadu Buhari launched a committee to "study & address" the changes, his office tweeted on Saturday.

"Nigeria remains committed to maintaining productive relations with the United States and other international allies especially on matters of global security," the President's office said in a statement.

Sudan, Tanzania and Eritrea had issued no official response by Saturday afternoon.

US officials remained vague on why the African nations were added to the list, citing concerns about exposing vulnerabilities to "nefarious" actors. The countries had either failed to meet the administration's intelligence-sharing standards, they said, or lacked updated passport systems.

Sudan was viewed as a state sponsor of terrorism, the officials said, despite the country's widely praised transition last year from military rule to a civilian-led government.

The impact was expected to be particularly pronounced for Nigeria, which has more than 300,000 immigrants in the United States.

Nigerians also accounted for one of the biggest groups of visa overstays in 2018, according to the Department of Homeland Security.

"We are a giant of Africa – the biggest population of black people in the world," Musa said, "so this is unfortunate. It's harsh. And I hope it's temporary."

Atiku Abubakar, the country's former vice president and Buhari's closest rival in the 2019 election, urged the United States to reconsider the scope of the policy.

"I call on President @realDonaldTrump to consider adopting measures that individually target those in government who have failed in their duties," he tweeted on Saturday, "rather than target the entire Nigerian population."

Though US officials said the restrictions would not apply to refugees, tourists or business travellers, some worried the ban could heighten discrimination against Africans abroad.

"It sends the message that Nigerians cannot be trusted," said Abubakar Sidiq Usman, a writer and new media specialist for the Nigerian Senate. "Those going to the US for business or leisure will face more scrutiny now."

The expanded travel ban comes at a time when the United States is trying to grow business and counter Chinese and Russian influence on the continent, which is home to one of the fastest-growing regions on Earth.

The topic is expected to come up on Monday when the State Department hosts a Nigerian delegation in Washington to discuss, according to a news release, "innovation and ingenuity."

"Instead of deepening ties to Africa's biggest economy, the administration appears to be going out of its way to sour its relationship with one of the continent's most important nations," said Matthew Page, an Africa analyst at Chatham House in London.

Nigeria has struggled for a decade to curb Islamist violence unleashed by Boko Haram and, more recently, fighters linked to the Islamic State, which has forced more than 2 million people from their homes.

"It can only officialise discrimination," she said, "and harm those fleeing conflicts, torture and those who simply want to unite with their families in the US."

The ban could dampen perceptions of the United States in affected countries, analysts say.

"There is a possibility that Americans would have a change in view on Tanzanians," Deus Kibamba, director of the Tanzania Citizens Information Bureau, a nonprofit with offices across the country – and Tanzanians, he said, could change their view on the United States.

Trump's first ban in 2017, which initially targeted Muslim countries, triggered protests in the United States. Federal courts struck down the policy, which was later reinstated by the US Supreme Court.

US officials estimate that the restrictions, which now cover 13 nations, will annually affect several thousand people.