Nicola Sturgeon’s authority over her party continued to disintegrate yesterday after the SNP’s longest-serving MP launched a scathing attack on its new Westminster leader Stephen Flynn.

Pete Wishart quit the SNP front bench in the House of Commons and accused Mr Flynn of a rebellion to bring down former leader Ian Blackford.

Defence spokesman Stewart McDonald, one of the SNP’s most prominent MPs, also quit his role after Mr Flynn vowed to ‘shake things up’, while its chief whip was axed.

As tensions heightened in the party, Miss Sturgeon refused to repeat her previous assertion that there had not been a coup to bring down Mr Blackford. 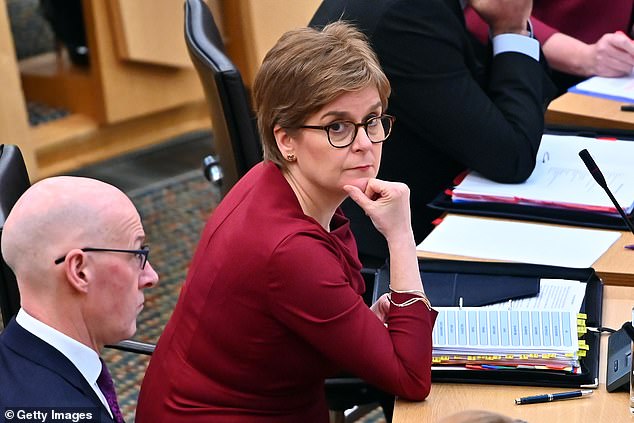 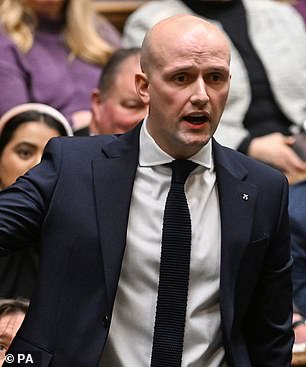 Scottish Tory chairman Craig Hoy said: ‘The SNP are fighting like ferrets in a sack. Their longest-serving MP is clearly unhappy at Stephen Flynn’s boasts about wanting to “shake things up” and Nicola Sturgeon losing her once vice-like grip over the party.

‘Despite claiming he will give the new Westminster leader his full support, Pete Wishart’s damning letter is the latest evidence of the deep splits running through the SNP.

‘His scathing attack on Stephen Flynn for bringing down Ian Blackford flies in the face of [SNP Dundee East MP] Stewart Hosie trying to pretend all is sweetness and light within the party, and is a clear sign of Nicola Sturgeon’s waning influence on SNP MPs.

‘Policy and personal disagreements are emerging all the time as the party’s reputation for iron discipline under Nicola Sturgeon disintegrates.’

Following Mr Blackford’s resignation as leader last week, Miss Sturgeon insisted there had not been a coup, despite reports that a group nicknamed the ‘Tuesday Club’ had plotted a challenge by Mr Flynn.

On the new leader’s second full day in the post yesterday, Mr Wishart, the Nationalist MP for Perth and North Perthshire, announced he was quitting his role as the SNP’s spokesman on the environment, food and rural affairs.

It is the first time he has moved to the party’s back benches in his 21 years as an MP. 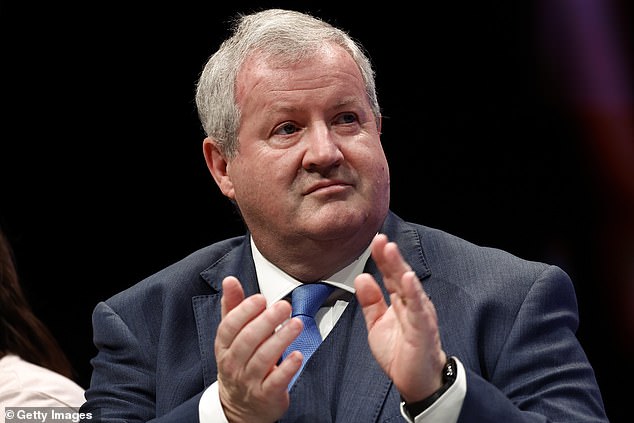 As tensions heightened in the party, Miss Sturgeon refused to repeat her previous assertion that there had not been a coup to bring down Mr Ian Blackford (pictured in October)

In his resignation letter to Mr Flynn, he also made clear that he believed the Aberdeen South MP had plotted a challenge against Mr Blackford. He said: ‘We never had an opportunity to discuss your plans for the group, neither when you were canvassing opinion for a leadership challenge, nor at any point during the very short campaign for the leadership itself.’

In an attack on Mr Flynn, he said: ‘I remain bemused as to the reasons why you felt it was necessary to seek a change in our leadership, particularly when we see yesterday’s opinion poll, which shows support for independence at a near all-time high and support for the SNP at Westminster at an unprecedented 51 per cent. Usually change of this significance accompanies failure, whereas we are looking only at sustained and growing success as a movement and party.’

He said he believes plans to ‘reset the relationship with colleagues in government and in the Scottish parliament’ are ‘extremely important for the general culture within the party’.

Mr Wishart added: ‘The Westminster group is unique in the respect that we are a party of power in a parliament, in which that power can never be exercised. Many of us carry the scars following the many attempts to manage that unfortunate tension over the course of the years.’

Asked yesterday lunchtime about Mr Wishart’s claim that Mr Flynn had been canvassing opinion for a challenge, Miss Sturgeon said: ‘Forgive me, I’ve not read Pete’s letter yet.

‘I’m aware he has written a letter, I’ve not had the opportunity to read it yet because I’ve been doing other things.’ Pressed on whether she still believed that there had been no attempt to oust Mr Blackford, she said: ‘Ian stood down last week, the group elected a new leader earlier this week.’

Mr McDonald, MP for Glasgow South, did not give a reason in his resignation letter for his decision to leave his role as defence spokesman. He insisted that Mr Flynn and his deputy Mhairi Black ‘have my full and unequivocal support’.

Replying to Mr Wishart’s resignation on social media, Mr Flynn said: ‘Pete, thank you for your exemplary service for the SNP on the front bench in Westminster over so many years. 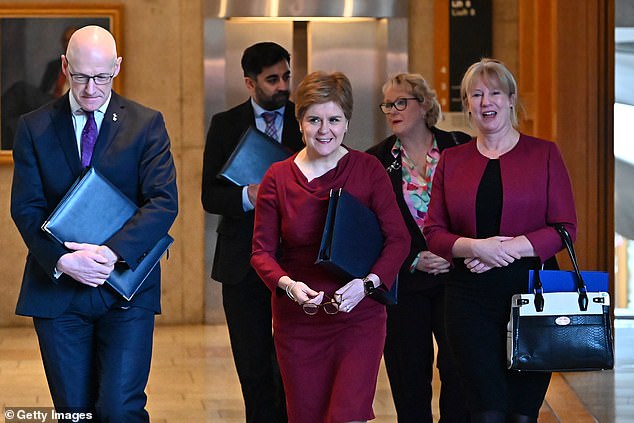 ‘As ever, my door remains open and I look forward to working with you as we support colleagues in Holyrood, hold the Tories to account and work to deliver independence.’ In an email to MPs, Mr Flynn said he will be putting together a ‘new-look team’.

According to details from an email leaked to the Times, he plans to install Martin Docherty-Hughes as chief whip, replacing Owen Thompson, and to set up a new ‘political cabinet’.

Meanwhile, Scottish Secretary Alister Jack yesterday wrote to Mr Flynn to congratulate him on his appointment.

He invited Mr Flynn to a meeting and said he hoped he can develop a ‘constructive and cordial’ relationship with him.

Mr Jack also said: ‘It is essential Scotland’s two governments work together on projects that will benefit the people of Scotland. As you know, the UK and Scottish governments have collaborated successfully on our city and region growth deals and our exciting, soon to be announced, freeports programme.

‘Together, we are already creating jobs and boosting the Scottish economy. But I believe there are more areas where we can work together.’

MICHAEL BLACKLEY: It’s great, fantastic, says Nicola… without a flicker of a smile

In front of the cameras, Nicola Sturgeon is expert at delivering finely polished plausible deniabilities when it comes to troubles within her party.

But as the glare of the broadcasting media faded yesterday, her public mask slipped when confronted in the parliament lobby about plots and coups by her MPs at Westminster.

Without showing any of the carefully cultivated geniality she is recognised for by adoring Nationalists, she curtly dismissed legitimate questions about internal strife, perhaps aware that her own leadership of the party itself seems to be losing its lustre.

Instead, when asked about her relationship with plotter-in-chief – and new Westminster leader – Stephen Flynn, she replied brusquely: ‘Great. Fantastic.’ Not a smile cracked her lips. It was in stark contrast to her reaction last week to former Westminster leader Ian Blackford’s resignation, when she swatted aside claims that a rebellion had forced him out. 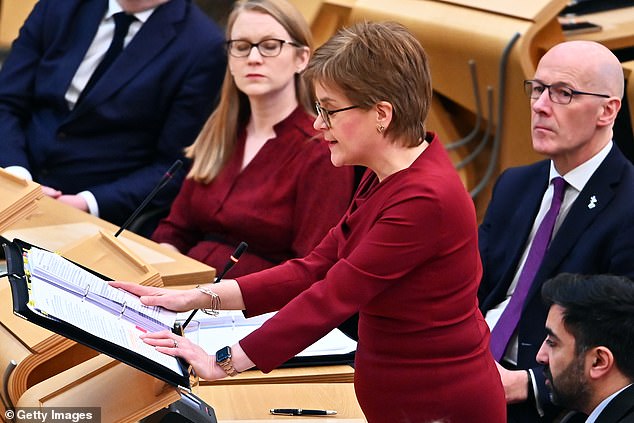 In front of the cameras, Nicola Sturgeon (pictured yesterday) is expert at delivering finely polished plausible deniabilities when it comes to troubles within her party

She told STV: ‘No, it’s not a coup. Ian has been Westminster group leader for five years now and he represents one of the furthest flung constituencies in the country. He’s making the decision given all that lies ahead for the SNP, given all the exciting work that lies ahead for the SNP, that this is the right decision for him to pass on the baton.’

In the week since, Miss Sturgeon’s demeanour has turned as cold as the weather after Mr Flynn finally gained the position he had coveted.

To seasoned onlookers, it is clear Mr Blackford fell on his sword after a social group including Mr Flynn – nicknamed the ‘Tuesday Club’ – had co-ordinated attempts to challenge him in a fight he was set to lose.

Any doubts about this were demolished yesterday with the shock resignation of the SNP’s longest-serving MP, Pete Wishart, from the front bench.

His resignation letter was stinging – and made clear he believed Mr Flynn had made moves to challenge Mr Blackford while he was leader.

Questioned about his remarks by journalists following yesterday’s First Minister’s Questions, with no camera present on this occasion, Miss Sturgeon notably dropped any attempt to deny there was a coup.

On the reasons for the change of leadership at Westminster, she said simply that this happened ‘because the group have voted for a new leader’. She said: ‘That’s done and dusted, there is a new leader at Westminster.’ 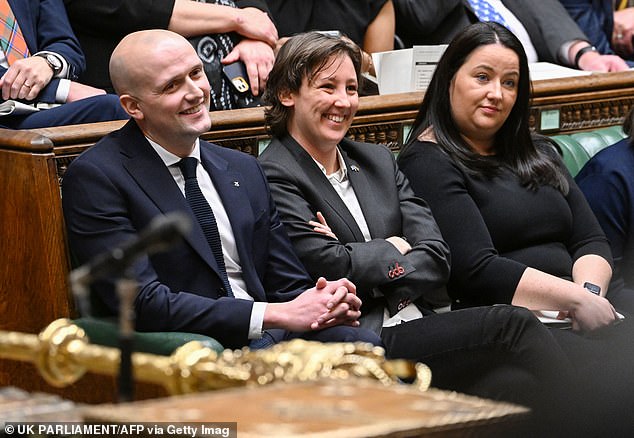 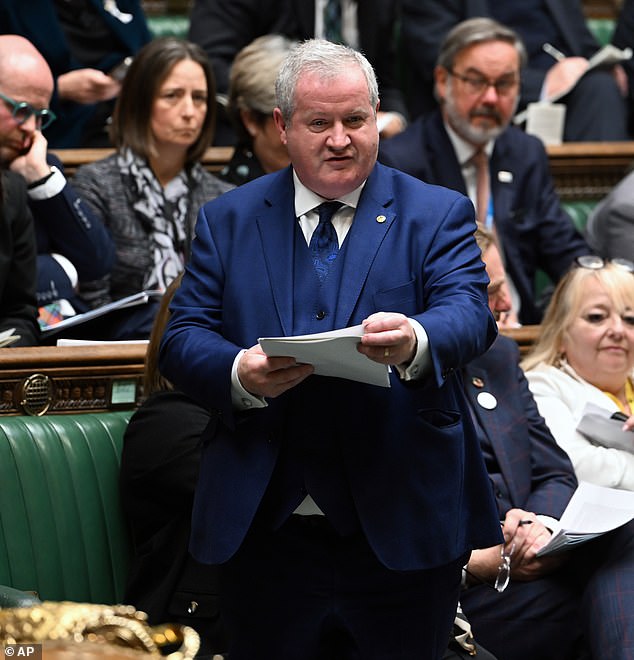 To seasoned onlookers, it is clear Mr Ian Blackford (pictured in November) fell on his sword after a social group including Mr Flynn – nicknamed the ‘Tuesday Club’ – had co-ordinated attempts to challenge him in a fight he was set to lose

On Mr Wishart’s claim that Mr Flynn had been canvassing opinion among MPs for a challenge, Miss Sturgeon said: ‘Forgive me, I’ve not read Pete’s letter yet. I’m aware he has written a letter, I’ve not had the opportunity to read it yet because I’ve been doing other things.’

The responses, which were notable for the absence of any endorsement of Mr Flynn, give a glimpse of the pressure now facing the First Minister.

Prior to the independence referendum in 2014, and still in the early years of Miss Sturgeon’s leadership, the SNP was famed for iron discipline – its MSPs and MPs sharing the same ultimate goal of independence.

That unity has been shattered in recent years as divisive issues such as the Alex Salmond trial and subsequent parliamentary inquiry, gender reforms and the approach to independence caused bitter divisions.

Mr Wishart’s actions suggest the scale of the divide in the Westminster group. He’s not always fully behind Miss Sturgeon either, however, and the reference in his resignation to the importance of changing ‘general culture within the party’ gives a further sign of the concerns its MPs have about the way they make policy.

This week, the SNP has been keen to bask in polling showing a boost in support for the party and independence.

But the bad-tempered and abrupt responses by the First Minister yesterday, as well as Mr Wishart’s bombshell claims in his resignation letter, expose the truth that exists off camera: that the SNP is at war with itself and that Miss Sturgeon faces severe challenges which could loosen her grip on the party she has led for eight years.