That’s not your kid! Hilarious moment newborn baby goat snuggles up with a giant tortoise at Texas petting zoo

Hilarious footage has captured the moment a baby goat snuggled up to a giant tortoise in his new petting zoo home.

James and Kelly Peeler had recently welcomed the newborn who was delivered by a nanny goat on their farm in Alvin, Texas.

And nervous to see how the animal was settling in, James recorded the moment he walked over to the pen in check up on the kid.

But rather than finding the baby keeping close to its mother, James found the goat had been taken under the wing of ‘Uncle Ike’, a giant tortoise and long-time resident on the farm.

‘We were checking on the new goat babies that were just born and Uncle Ike was loving on one of the new babies,’ he said.

The zoo was set up six years ago by couple James and Kelly Peeler who were inspired after seeing a petting zoo at their nephew’s birthday party. 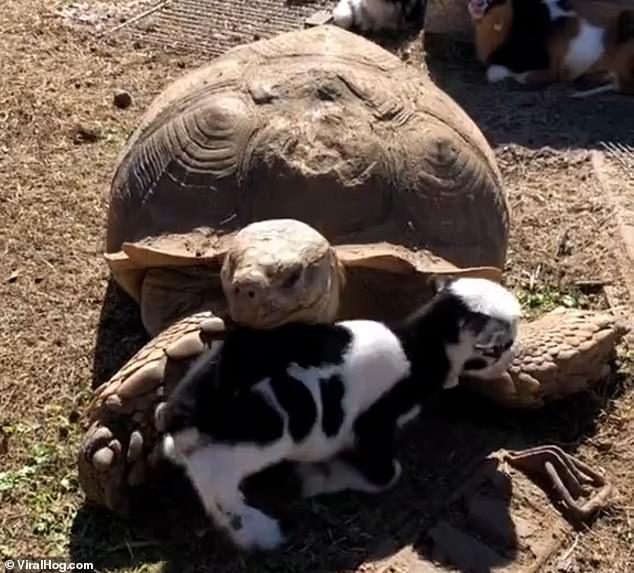 Hilarious footage has captured the moment a baby goat snuggled up to ‘Uncle Ike’, a giant tortoise in his new petting zoo home in Alvin, Texas

Based on a five-acre farm in Alvin, they have continued to grow their range of animals and now keep between 80 and 100, most of which travel around as part of the mobile zoo.

The regular lineup of animals for the zoo includes mini ponies, goats, a lemur named Gizmo, a wallaby, baby geese and Ike the giant tortoise.

‘We hook up the trailer and they pretty much board themselves. Except, Ike, the tortoise, who needs to be carried,’ said Kelly of their mobile zoo.

While all of the animals are people, not all go out on petting duties, with some family animals remaining at home.

‘The animals know when they are home, they can relax so we don’t have petting customers come to the farm,’ said Kelly.