London: She had eagerly looked forward to going home for the holidays and reuniting with friends over dinner and drinks.

Instead, Eva Keeling, 19, says, she wound up injected by a stranger with a needle while at a bar in her hometown of Stafford, in northern England, leaving her unable to speak or function.

“We went outside [the bar] for some fresh air . . . then I ended up losing all control of my body, the ability to walk, hold my head up, I couldn’t talk – I was projectile vomiting everywhere,” Keeling said. 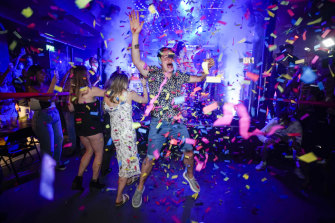 A number of countries have reported incidents of needle spiking in nightclubs and concerts, with victims often unaware until feeling sick or simply discovering needle marks.Credit:AP

Days after her April night out, she still felt ill and, while getting dressed, noticed her arm was swollen. Feeling “petrified”, she rushed to a hospital for blood tests and was screened for diseases such as HIV. Doctors informed her she’d been injected with a “dirty needle”, causing the infection and swelling.

“I was so upset and shocked that it happened to me,” she said. 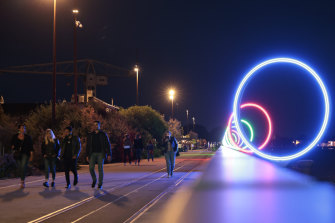 Young people walk on quay Des Anneaux near the Warehouse nightclub, in Nantes, France. Across France and other countries in Europe, needle spiking attacks are on the rise.Credit:AP

Keeling is one of hundreds of people across Britain and Europe who have been victims of suspected “needle spiking” – an injection administered without consent or knowledge, often in a bar or nightclub setting, in an attack similar to the more common crime of contaminating alcoholic drinks.

Authorities are grappling with how to prove and combat this kind of hard-to-trace attack and are seeking to raise awareness about the small but growing number of reported cases.

French police have received more than 300 complaints of injections in various regions since the end of March but have not made arrests, according to local media reports. The victims – many of them women – often report suffering memory loss or noticing injuries only later. Neighbouring Belgium has seen reports of similar incidents at a nightclub, a soccer game and a Pride festival.

It’s unclear whether drugs are being administered in the attacks. Doctors have previously said that extremely thin needles, as “fine as hairs”, are easily accessible online, as are prescription drugs, including painkillers and opium-based medicines.

Nils Marzolf, 21, said he was avoiding nightclubs because of the reports but still found himself pricked at a metro train station in the French city of Lyon last month. He checked his pockets after a stranger approached him and then found a mark on his arm, he told the TV channel BFM.

The mysterious wave around France has puzzled authorities, who have yet to determine a motive or whether the reported injections contained drugs at all. It has also prompted the Interior Ministry and police to issue safety warnings urging vigilance.

In Strasbourg, in eastern France, the police appealed to witnesses to come forward with information after eight people appeared to have been injected at a rap concert. In the northern region of Pas-de-Calais, authorities issued guidance for suspected victims to get toxicology screenings.

Officials are searching for answers, and motives remain unclear.

Dawn Dines, founder of the non-profit Stamp Out Spiking, which works to combat drink spiking in Britain, said needle-spiking remained “minuscule” compared to drink contamination, but the effects can be similar. Victims often feel “embarrassed and ashamed”, she said, and can have a sense of guilt for not being able to remember events – contributing to a lack of reporting even though they are not at fault.

“It’s a really difficult crime,” she said. Possible motives could include assault, rape, human trafficking or even personal vendettas, she added. Dines called for better education of bar employees, security officials and those involved in the nighttime economy to stem the crime.

Merlijn Poolman, the night mayor of the Dutch city of Groningen, whose council’s work includes preventing sexual harassment, said his team has set up an online helpline for residents to report such incidents. While Dutch media outlets have reported a handful of possible cases in the country, he said it was hard for medics to confirm reports in his city, including whether needles were involved.

One theory was that there might have been attempts or copycats with other objects or maybe even with a needle without something in it to spread fear without actually injecting drugs, Poolman said.

“We can’t conclude anything yet,” he added. “We do take it seriously, but we also surely don’t want to raise panic that there are needle stingers all around.”

Keeling said she had a scar on her right arm. “I don’t like looking at it and being reminded of it. I’m still dealing with it, mentally.”

She remains wary of going to big events – she couldn’t ride the subway in the immediate aftermath, she said, because of suspicion about strangers. She laments the lack of victim support after the incident but said spreading the word about the crime helps.

“I want to talk about it as much as possible because I want something to happen to help girls.”