Slovenian Prime Minister Janez Jansa is fighting an uphill battle in elections on Sunday that may rid the European Union of a leader who has challenged its democratic values.

Against the backdrop of the war in Ukraine, and as fellow EU member France votes over whether to give President Emmanuel Macron a new term or replace him with right-wing standard bearer Marine Le Pen, opinion polls tip Slovenia’s upstart Freedom Movement party to oust Jansa’s party from power.

While the Freedom Movement, led by former state-owned utility chief Robert Golob, is running neck and neck with Jansa’s Slovenian Democratic Party, it has a strong chance of forming a coalition with left-leaning and centrist parties even if it doesn’t win the most votes. 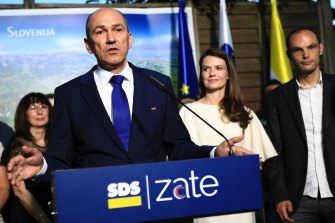 But the Euro-area and NATO member nation has a history of elections fraught with post-ballot wrangling. And as Jansa tries to bolster support in a campaign focused on his backing Ukraine, it may take weeks of maneuvering for either party to muster the majority needed to rule.

“The left-wing bloc has the advantage, but the outcome is far from certain,” said political analyst Rok Caks, adding that the government could be unstable. Polling stations open at 7am and close at 7pm, when exit polls will be released.

Jansa, a 63-year old former Marxist turned right-wing populist has led a career marked by surprising comebacks – including a communist-era prison term and another after a 2013 corruption conviction that was overturned.

His spot at the top of the government is his third, and is testament to his ability to confound rivals. Opponents blocked him from power after he won 2018 elections, but he capitalised on a mistake made by his predecessor, Marjan Sarec, by wooing several of his allies to his side when Sarec dissolved his government in a bid to call early elections.

Opposition parties say he is undermining democracy. Many Slovenians agree, staging two years of almost weekly protests. Those addressed issues ranging from his government’s restriction of funds to public media critical of his policies to giving police too much power, making sweeping changes to state institutions, and corruption – issues that his ally, Hungarian Prime Minister Viktor Orban, is also accused of.

Like Orban, Jansa has courted Eurosceptic leaders. He met France’s Le Pen when he chaired the EU’s rotating presidency last year and agreed with her that national constitutions supersede EU treaties, echoing other governments that have clashed with the bloc’s rule-of-law standards.

Slovenians “long for freedom, democracy, culture, and independent media that would promote kind and respectful discourse,” Golob said in a pre-election debate this week. He denounced what he called “a police state, dictatorship, teargas and water cannons” under Jansa.

“No thank you, that is what the people are saying to this government,” he said.

Golob and other opposition parties have also criticised Jansa for his handling of the pandemic, saying conflicting messaging and a botched vaccination campaign led to too many deaths in the nation of 2.1 million.

Jansa denies wrongdoing. A staunch supporter of former US president Donald Trump, who he endorsed before the 2020 US election, he regularly takes shots at the judiciary and EU officials in coarsely worded attacks on Twitter.

Jansa has leaned on his backing for Ukraine – he joined his Czech and Polish counterparts in the first visit by EU leaders to President Volodymyr Zelensky in Kyiv after the war broke out – to try to bolster his support. Giving numerous interviews with top global news outlets, he has boasted of putting his tiny nation “back on the world map.” He also touts economic growth of 8.1 per cent last year, record employment, and new infrastructure projects.