Mysterious chalk markings are being scrawled on homes in a Stoke on Trent street amid fears they are part of a secret ‘Da Pinci code’ used by burglars or dog-nappers.

The circles and circles with a diagonal line which have been drawn in white chalk are sparking fear among families that live in Beville Street, Fenton.

There has been some disagreement about whether the so-called ‘Da Pinci Code’ markings indicate ‘nothing worth stealing’ or are a reference made by utility workers to where the ‘water supply’ is located.

The method has been associated with burglaries and linked to dog thefts according to a safeguarding agency and some police forces.

But West Mercia Police have long claimed this is a myth as utility workers are also known to leave signs on walls to indicate an area has been checked for potential issues like a gas leak or to earmark where a water pipe is located.

Whatever they mean, residents in Stoke on Trent are ‘keeping an eye’ out for thieves after being ‘worried’ by the markings. 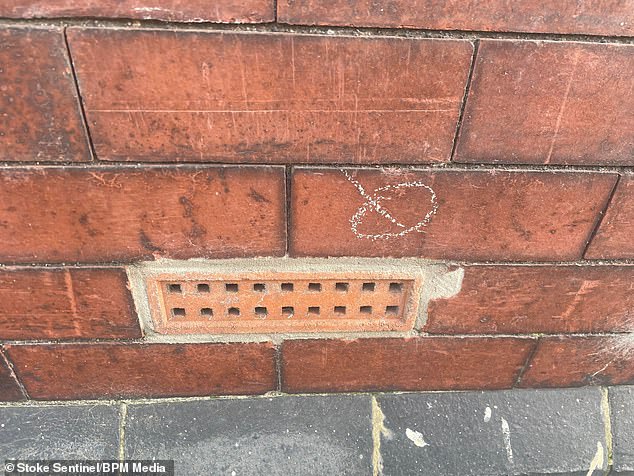 The circles and circles with a diagonal line which have been drawn in white chalk (seen here) are sparking fear among families that live in Beville Street, Fenton

Nick Taylor, 39, who lives in one of the homes that has been marked in Beville Street said it has left him feeling ‘worried’.

He added: ‘I’ve heard about people doing it. It’s usually done for dogs.

‘My doorbell picks up on anyone who walks outside my house, so I will have a look through my doorbell footage for anyone suspicious.

‘I’ll be keeping an eye out and I’ll wash the mark off and have a look up the street.’

Chelsea Coleman’s property, in Beville Street, has also been marked.

The 28-year-old said: ‘It’s peculiar. A lady messaged me a few weeks ago about people using chalk to mark houses.

‘I never saw anyone do it. I’m a bit creeped out. I’ll just be keeping an eye out.

‘Touch wood, we’ve lived here since 2005 and had nothing other than two bikes stolen last year.

‘I work from home, so I’d see them if they tried to break in as I’m home all the time.

‘Maybe it’s just a utility company because it’s on almost every house.’

George Millward’s property in Beville Street has not been marked with the chalk, but he says everyone in the street is keeping an eye out.

The 85-year-old said: ‘I’ve been told it’s burglars. We don’t have one on our house, but one or two have got them.

‘I’m not worried about it because I’ve got nothing for them to pinch. But everyone is keeping more of an eye out. We always do, me and the wife.

‘I hope it’s just something innocent. The police have been informed by a woman up the road.

‘She told the police about it after she had a marking appear.’ 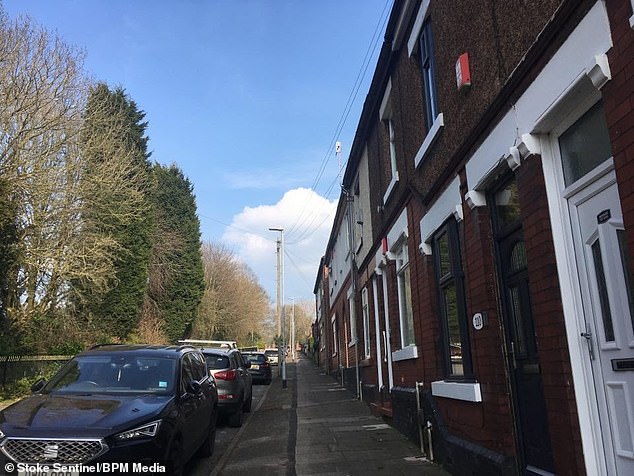 George Millward’s property in Beville Street (pictured) has not been marked with the chalk, but he says everyone in the street is keeping an eye out

The Safeguarding Hub – which shares home protection advice and information across the UK – previously said: ‘Between us, we have a fairly extensive knowledge of burglary.

‘We have spent many hours speaking to distraught victims, visiting crime scenes and dealing with burglars.

‘We have actually seen and experienced these symbols being used by criminals.

‘This is not to say that this is a common practice between bands of thieves, for most burglars work alone.

‘We do not want to scaremonger and we can say confidentially that the use of these symbols is very rare.

‘But, if you are a caregiver to an elderly or vulnerable person and spot strange marks outside their home, do you really want to dismiss it out of hand without just ensuring that the symbol is legitimate?’

While the symbols may not be cause for concern, they should be reported to police on the non-emergency 101 number.

Elsewhere in the country, they have been dubbed the ‘Da Pinci Code’ with signs for ‘nothing worth stealing’, ‘wealthy’ and ‘good target’. 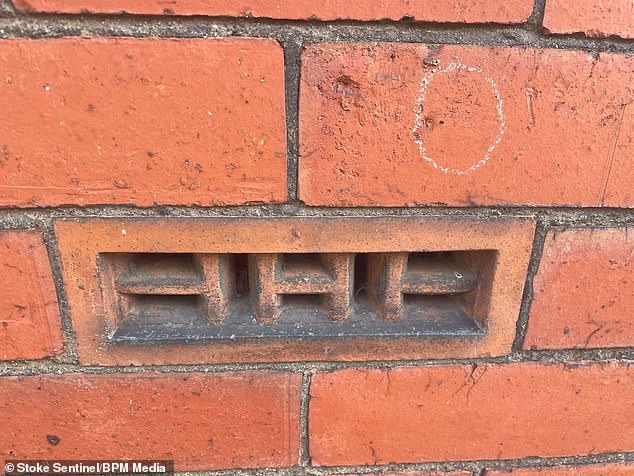 In Desborough, Northamptonshire in 2021, Gemma Smallbones, said after a man claiming to be a salesman from energy company called to her home, she noticed the markings.

While in 2013, Salford police urged people to come forward after they believed they were being used to mark the addresses of elderly people.

And Plumstead police in London Tweeted in 2019 that the symbols can mean ‘too risky’, ‘nothing worth stealing’ and ‘previously burgled’.

A triangle symbol is used to show a single woman lives in the property on her own, or vertical lines could imply a house has obvious valuables inside.

Also keep an eye out for letters ‘M’ which tells other burglars to strike in the morning, whereas ‘N’ means a night-time intrusion.

A West Mercia Police spokesman told The Sun then: ‘We are aware of messages circulating again on social media purporting to be describing the ‘criminals code’ of paint or chalk markings left outside properties, identifying future potential targets for thieves and burglars.

‘However, there is no actual evidence to link these symbols to anything other than completely innocent and easily explainable activities.’

The Institute of Highway Engineers said: “The markings usually refer to the position of cables and pipes below the surface and often marked out in advance of proposed works.

“They can indicate depth, owner and direction.”

The five circles does not mean a family is wealthy, but instead shows how many cables are inside a cable duct.

The two rectangles illustrate that there is potential movement of a manhole, rather than the occupants being nervous and afraid.

An ‘X’ in a box stands for ‘water’ and does not mean that a house with that marking is a good target, while an ‘X’ in a circle shows the position of a proposed new lamppost instead of a property that’s not worth stealing from.