Telling us what you really think? Tory MP makes unfortunate Commons gaffe as he calls Brexit backstop the ‘BACKSTAB’

Conservative MP Bill Wiggin made an unfortunate error in the Commons today when he referred to the backstop in the Brexit deal as the ‘backstab’.

The member for North Herefordshire mixed up his words while asking Theresa May a question about her agreement with Brussels.

The comment appeared to be an error rather than an acerbic attack, as Mr Wiggin was speaking in support of the PM, but many Brexiteers have been fiercely critical of the backstop which aims to prevent a hard Irish border.

The remark prompted mutters in the chamber, where the Prime Minister was facing down MPs to defend her Brexit agreement.

Many Conservative critics of Mrs May have used similar language to describe her deal, with Boris Johnson saying this week the agreement was a ‘sell-out’. 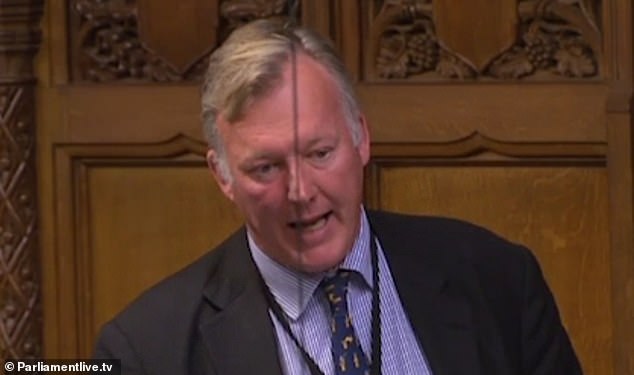 Speaking in the chamber today, Mr Wiggin said: ‘I put aside my fear of the backstab agreement and come to the point: my right honourable friend is right, we don’t want another referendum.

‘We want to see the benefits of the one that we had.  And to that end I thorouhgly welcome what she was saying about negotiating deals during the implementation period.’

The PM did not comment on the verbal lapse in her answer, saying the trade deals ‘would come to fruition’.

The backstop plan, which is intended to keep the Irish border open by keeping the UK in the customs union, has been a particular target of Tory Brexiteers furious with Mrs May’s deal.

Many Leave supporters fear the backstop will keep Britain in the customs union indefinitely and fail to honour the referendum result.

Former foreign secretary Boris Johnson said: ‘We should junk forthwith the backstop, upon which the future economic partnership – according to this political declaration – is to be based, and which makes a complete nonsense of Brexit.’ 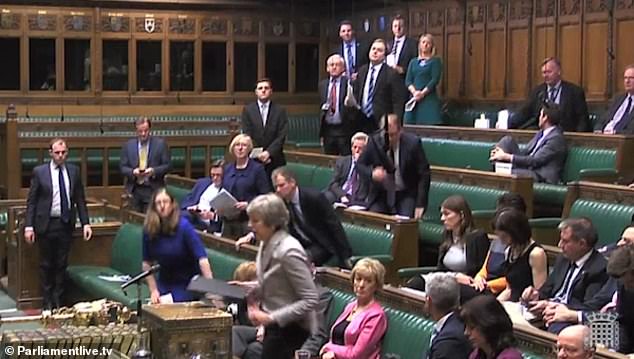 Meanwhile former Brexit secretary Dominic Raab said Mrs May’s backstop would do the opposite of the will of the people by giving control away.

He told the Commons: ‘The backstop ties the UK to the customs union and single market rules with no voice and an EU veto over our exit whilst paragraph 23 of the political declaration makes that the starting point for future relations to build on.

‘The top reason people voted to leave the EU was to take back control over our laws. Isn’t it the regrettable but inescapable reality that this deal gives even more away?’

He said: ‘The backstop is a constitutional anomaly of the first order because it makes the EU the guarantor of a bilateral treaty between ourselves and Ireland, of which the people have never been consulted.’