A motorist has sparked outrage after he parked an ex-British Army vehicle on a residential street and left it there for months.

The armoured personnel carrier, known as ‘the tank’, has been spotted in the Didsbury, Manchester area for the past 20 years.

But now, after months of complaints, Councillor David Ellison has pledged to remove the vehicle from the T-junction where it is parked. 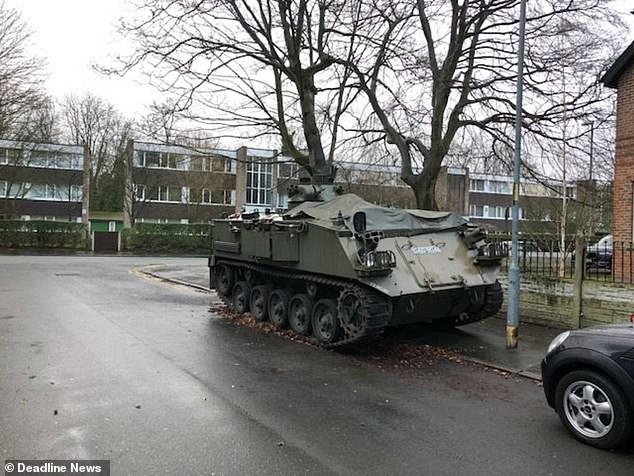 The armoured personnel carrier, known as ‘the tank’, has been spotted in the Didsbury, Manchester area for the past 20 years

He said: ‘A number of people have been to me with their concerns over the tank that has been parked for many months now at the corner of Old Lansdowne Road and Lapwing lane.

‘I have raised this with the council on behalf of local residents and will continue to push for it to be removed as it is causing a hazard.’

The military vehicle’s owner, who did not want to be named, said the APC is taxed and insured.

He also confirmed he has a licence for the carrier, the BBC reported.

But despite some residents claiming the vehicle is a hazard to the area, others have asked Mr Ellison to ‘leave the tank alone.’

Writing on the Labour councillor’s Facebook page, one said: ‘Leave the tank alone. The kids [love] seeing it and it’s a fun feature for the area.’ 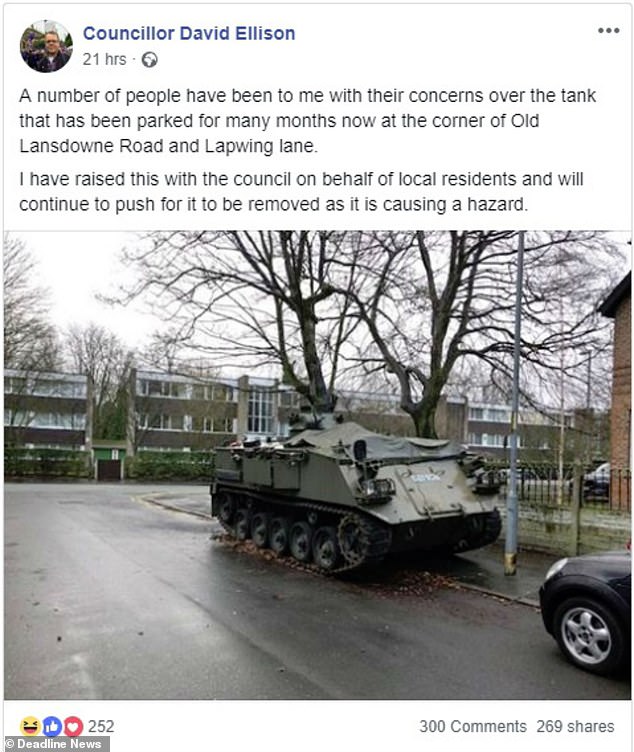 But now, after months of complaints, Councillor David Ellison has pledged to remove the vehicle from the T-junction where it is parked

Phil Hobson said: ‘These tanks have been here years. When I was a boy, I used to go look at them.

‘I’ve now taken my kids to look at them.’

Lee Halliday said: ‘How is this causing any more of a hazard than the car parked in front of it.

‘As long as it isn’t on double yellow lines and is registered taxed then I don’t think there is anything wrong with it being parked here.’

The Highway Code says motorists must not leave their vehicles in ‘a dangerous position or where it causes any unnecessary obstruction of the road’.

It also says parking on the pavement can ‘obstruct and seriously inconvenience pedestrians, people in wheelchairs or with visual impairments and people with prams or pushchairs.’