Reunited after 28 years: Mother breaks down in tears as she finally meets her long-lost son who was ‘accidentally switched at birth in hospital’

This is the emotional moment a mother breaks down in tears when she hugs her biological son for the first time in nearly three decades after he was swapped by accident at birth.

The pair were reunited in China two months after the woman discovered that the child she had raised for 28 years was someone else’s through a DNA test.

The mother, known by her alias Jiang Yanli, was trying to donate part of her liver to her cancer-stricken son when she made the shocking discovery.

The hospital where Mrs Jiang gave birth said that they will investigate the accident that had changed the lives of two families forever. 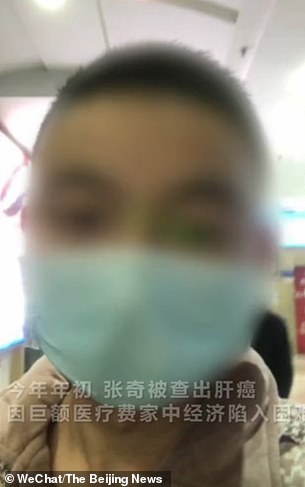 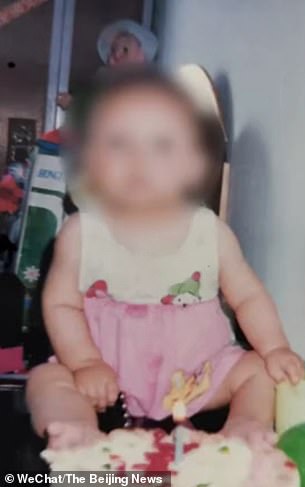 The mother, known by her alias Jiang Yanli, was trying to donate part of her liver to her cancer-stricken son when she made the shocking discovery

Mrs Jiang’s son, known by his alias Zhang Qi, has been receiving treatment at a hospital in the Chinese south-eastern city Nanchang after he was diagnosed with liver cancer in late February.

The Chinese mother decided to save her dying son’s life by donating part of her liver to him – but only to find out that their blood types did not match.

The family then took a DNA test and discovered that their son of 28 years was not their biological child. 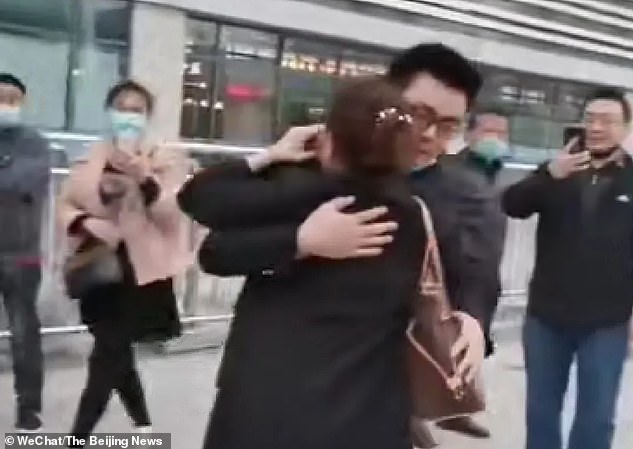 Hoping to find Zhang’s birth parents for a liver transplant, the Jiangs tracked down medical records at the Huaihe Hospital of Henan University, where the mother gave birth.

It turned out that Mrs Jiang’s baby boy was mistakenly handed to another mother who also gave birth at almost the same time on June 15, 1992.

With the help from local police, Mr and Mrs Jiang finally reunited with their biological son, known as his alias Guo Ming, on April 17.

An emotional video captured the moment Mrs Jiang meeting her long-lost son for the first time after 28 years.

Guo, who now works as a police officer, has started his own little family with a wife and children.

He told the local press: ‘When the police first called my foster father, he thought it was a scam.

‘But coincidentally, my biological mother reported it to the same police station where I work,’ Guo said.

‘I was totally perplexed. I thought it was impossible for something like this to happen.

He continued: ‘It was a flood of different emotions. It’s very difficult to describe with words.’ 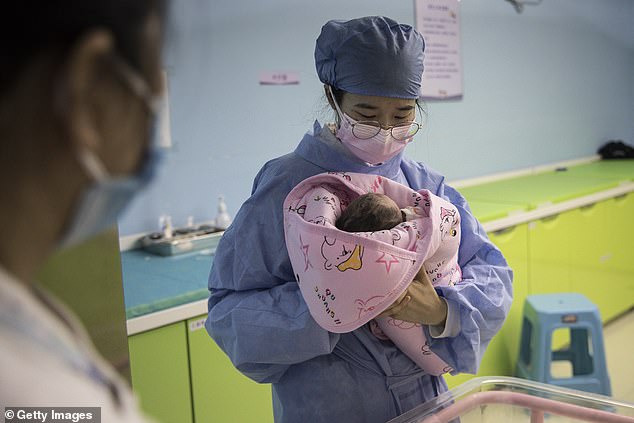 It turned out that Mrs Jiang’s baby boy was mistakenly handed to another mother who also gave birth at almost the same time on June 15, 1992. The picture taken on February 21 shows a nurse holding a newborn baby at a private obstetric hospital in Wuhan

Zhang’s biological mother, who is a Hepatitis B carrier, was also diagnosed with liver cancer and had undergone an operation recently, according to the press.

Because of his frail condition, the Jiangs still haven’t told Zhang about his real parents due to fears that the trauma could threaten his health further.

The families also believed that a Hepatitis B vaccine, which Zhang was meant to receive, was mistakenly injected to Guo, who was healthy.

The hospital said that they will look into the incident and investigate how the two babies were accidentally switched.

Zhang is still at the hospital receiving treatment. His birth father said that he is planning to take a compatibility test at the hospital for a potential liver transplant with Zhang.

Guo said that he will try to visit his biological parents as often as possible. He also hoped that Mr and Mrs Jiang could move to his city once they retire. 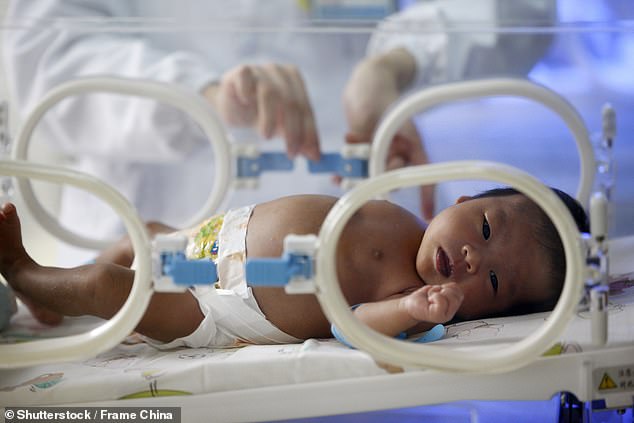 The file picture shows a newborn baby lying on a bed in a hospital in Huabei, Anhui Province