As Australians pondered their four walls in 2020 during the nation’s first pandemic lockdown, events manager Sarah O’Brien found herself considering what she wanted in life.

Living alone and with a busy career, she had planned for a partner and children to be part of her future. But being realistic about women’s biological clocks, she had also considered having some of her eggs frozen in case she did not meet someone in a timely way. 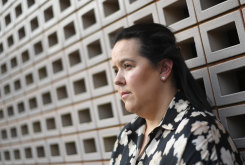 Sarah O’Brien had eggs frozen after thinking over her future during lockdown in 2020.Credit:Justin McManus

By the end of the year, Ms O’Brien had 12 of her eggs retrieved for storage by Melbourne fertility specialist Lynn Burmeister.

“It was very much an insurance policy … going into last year I probably really wanted a partner and really wanted kids. As [the year] eventuated, I was like, ‘I’m not 100 per cent sure what I want.’ But this is insurance for down the track, so the option is there and this could help along the way,” said Ms O’Brien, 37.

“I definitely factored into the [egg-freezing] decision not really being able to get out and about as much; COVID definitely has been a bit of a reset for me.” 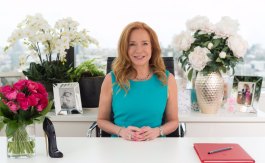 Melbourne fertility specialist Lynn Burmeister says the pandemic may have “made us realise what’s important in our lives”.

Dr Burmeister is one of several clinicians who noticed an increase in demand for egg-freezing, and she believes it is because dating was off limits during lockdowns and women had time to assess their priorities. Some had saved money they would have previously spent on travel.

“I just kept seeing more and more women. We’ve seen egg-freezing increasing over the last five years, but we saw it happening more rapidly last year,” said Dr Burmeister. “It think that was because girls weren’t getting out of the house, weren’t dating and probably had time to sit on their computers, talk to their friends and read about it.”

Some women hoping to eventually have children had relationships break down during isolation, and “maybe the pandemic’s made us realise what’s important in our lives”.

‘It might … perhaps allow women to try for a baby later in life, but it’s not a back-up plan. It is important to have realistic expectations.’

National group City Fertility also noted a 119 per cent increase in egg-freezing between 2019 and 2020. As of June 30 this year, the group had already exceeded the number of appointments it recorded nationally between January and December last year. The strongest growth was in Sydney and Melbourne. 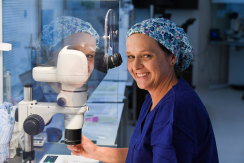 Embryologist Jenny Curley in the egg-freezing lab at City Fertility in Sydney.Credit:Peter Rae

Monash IVF clinician Professor Beverley Vollenhoven also witnessed an increase and said the pandemic “has certainly given people more time to take stock of their lives and focus their thoughts towards family and how important it is to them. As a result of spending more time at home, more women have decided to take the step to freeze their eggs – both for elective and medical reasons.”

The Monash group noted a jump in egg-freezing numbers of 24 per cent in Victoria and 134 per cent in Queensland, mainly among women in their 30s. 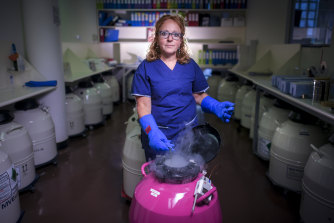 Associate Professor Kate Stern says there has been a “cultural shift” in how the procedure is viewed.Credit:Eddie Jim

Associate Professor Kate Stern from Melbourne IVF said there had been an upswing in demand for egg-freezing in the past two to three years as younger women who could afford it acted to manage their own fertility.

The pandemic “might just have made more women save a bit of money and be thinking about their future and the fact they can’t date” in lockdowns, she said.

“Over the last two to three years we’re seeing a cultural change; we used to see women who were 38 to early 40s feeling their life had ‘failed’ and this was a desperate thing to do, whereas now we’re seeing younger, more assertive women seeing [egg-freezing] as a positive in their early 30s,” she said.

“They’re talking about it in their workplaces and with friends and seeing it as a positive for their future.”

Steve McArthur, scientific director of the national fertility group Genea, said the group had “seen a significant increase in patients accessing our services for both IVF and social egg-freezing”. This reflected the impact of lockdowns and the release of the site YourIVFSuccess, which allowed patients to examine success rates according to statistics on the Australian and New Zealand Assisted Reproduction Database.

Monash University senior research fellow and fertility expert Karin Hammarberg said 2020-21 figures from the Victorian Reproductive Treatment Agency would be available soon, but that in 2019-20 there had been a 30 per cent increase on the previous year in the number of women who froze eggs, to 4048 women.

Dr Hammarberg has found information on clinic websites to be “poor to moderate” in previous research. She cautioned freezing is no guarantee of a successful pregnancy and women need to understand a large number of eggs may be needed to enhance their chance of success, which could be very expensive. Cycles cost between $5000 and $10,000 plus storage.

“It has potential but may or may not work out. It might be an opportunity to perhaps allow women to try for a baby later in life, but it’s not a back-up plan. It is important to have realistic expectations,” she said.