Miguel St Martin, 21, and Harry Doyle, 18, were convicted today of carrying out the raid at Boodles jewellery store in Sloane Street, Knightsbridge on March 26 last year.

One month later members of the same group, including St Martin, targeted the Yves Saint Laurent shop in Sloane Street, stealing £90,000 worth of handbags before leaving on mopeds.

St Martin and Doyle were among a gang of six people who armed themselves with axes, hammers and swords before arriving on mopeds at the Boodles store along with a stolen Land Rover – which they crashed into the side of the store in an attempt to break in.

When this didn’t work they used a sledge hammer, but the robbers then fled empty handed after they set off a burglar alarm which emits a smoke cloud. 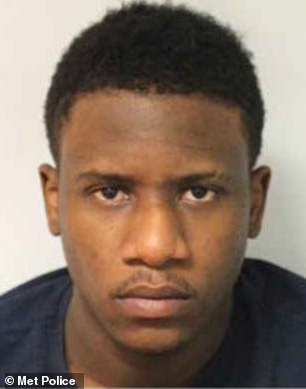 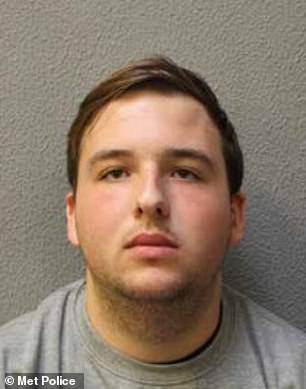 Miguel St Martin, left, and Alfie Wary, right, were part of a group of moped thugs 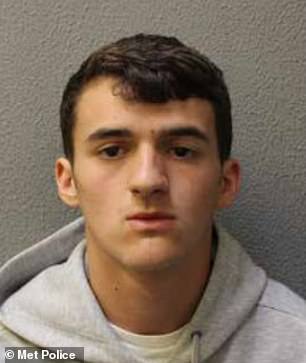 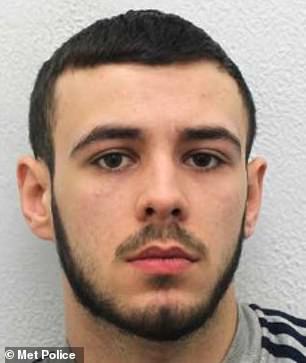 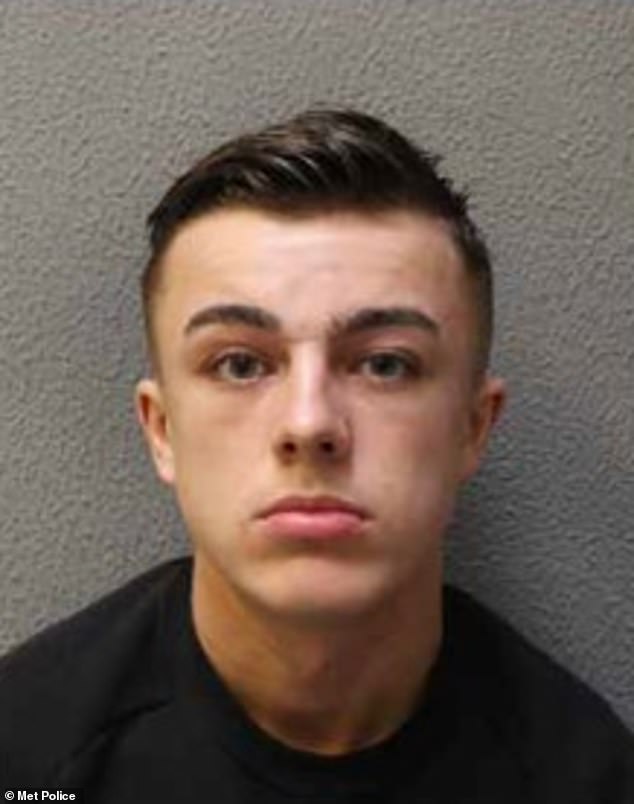 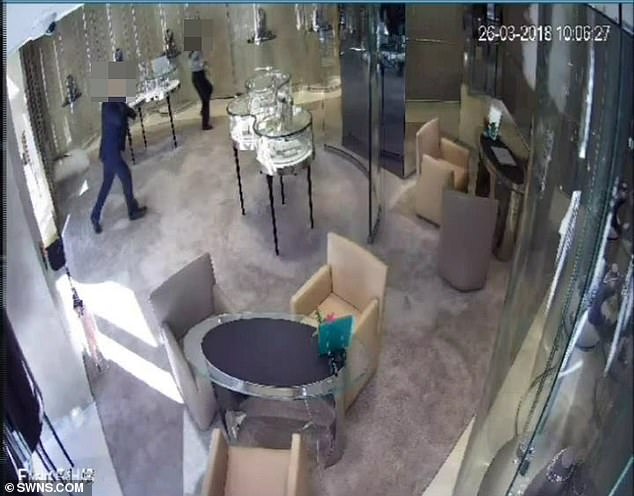 Pictured: Terrified staff fleeing as the car crashes into the Boodles jewellery store

Petar Dimov, a 48-year-old builder who was working at a site opposite Boodles, was slashed across the knees with an axe and stabbed in the back after he ran across the road to intervene.

Mr Dimov, who moved to Britain from Bulgaria 15 years ago, saw the gang ‘slowly’ approach the shop on mopeds with covered number plates, before the Land Rover ploughed into the building on a busy Monday morning.

He grappled with one gang member before the others piled in, slashing him with a sword and an axe.

He was left with a permanent limp, battling a lung infection, Blackfriars Crown Court was told. 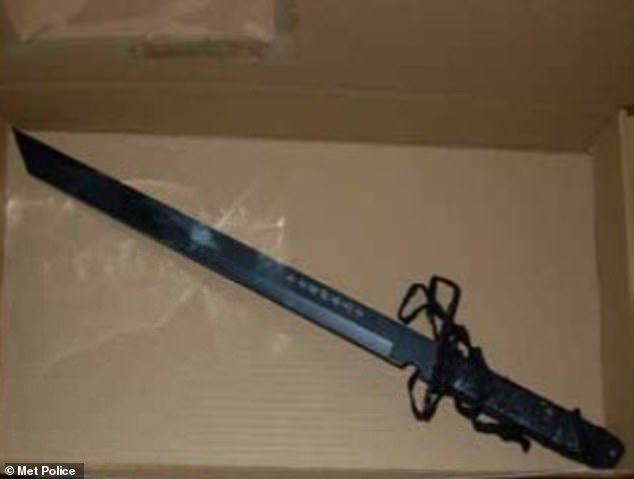 Pictured: One of the swords used during the attack on the Boodles store last year 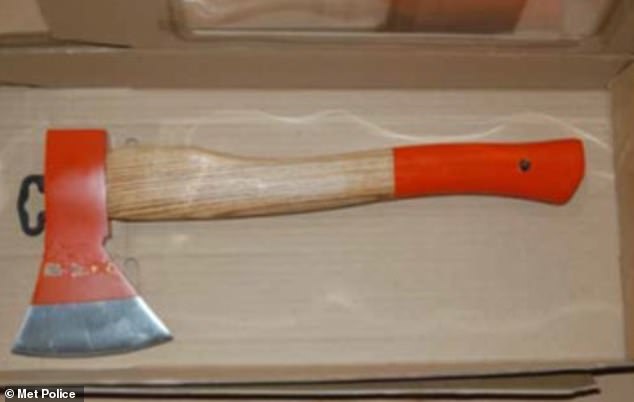 Pictured: An axe taken to the scene of the Boodles raid in Sloane Street in Knightsbridge 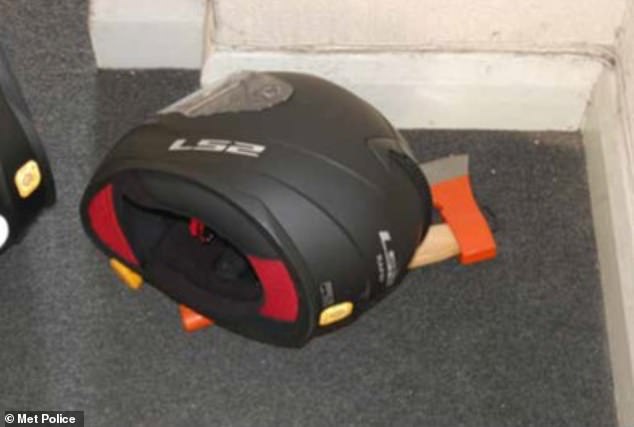 Prosecutor Michael Shaw said: ‘Having attacked Mr Dimov they jumped back on their motorbikes leaving the Land Rover abandoned and rode back to Islington from where they all originate.’

Officers tracked down the perpetrators while investigating an Islington-based moped gang that robbed three mobile phone outlets between May and November 2016.

Thirteen members of the gang and three handlers were convicted during trials that took place between August 2017 and October 2018.

In February 2018, it was discovered that a garage in Macclesfield Street in Islington was being used by other gang members who were snatching mobile phones from members of the public in Camden, Islington, Westminster, and the City between August 2017 and February 2018.

Recovered mobile phone footage showed these suspects stealing a moped in broad daylight and threatening a security guard with a large zombie knife.

St Martin, Harry Doyle, 18-year-old Henry Histon, a 16-year-old boy and two other as yet unidentified people then attempted to rob Boodles jewellery store on Sloane Street SW1, armed with weapons including axes and samurai swords.

One month after the Boodles raid St Martin, said to be the ‘mastermind’ behind the plot, targeted the Yves Saint Laurent shop in Sloane Street along with Alfie Warry, 21, Henry Histon, and an as yet unidentified fourth person.

The gang smashed in the door and stole £90,000 worth of handbags and left on mopeds.

On the same day, officers tracked St Martin to a hotel in Kings Cross, where he was arrested on suspicion conspiracy to commit robbery. 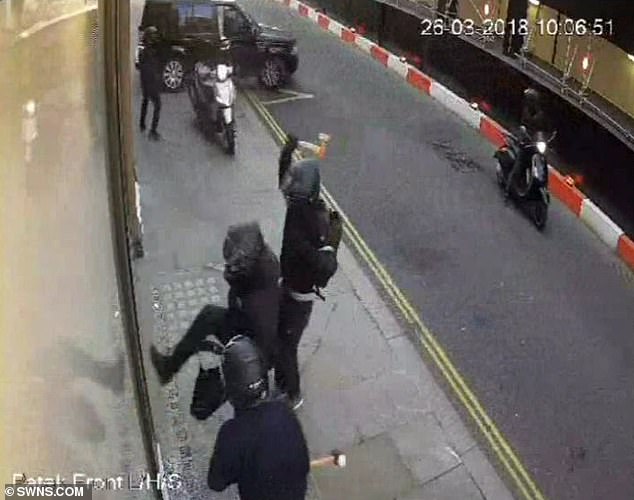 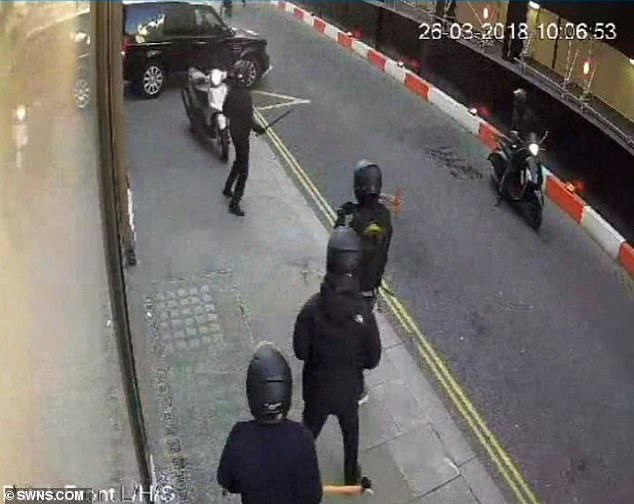 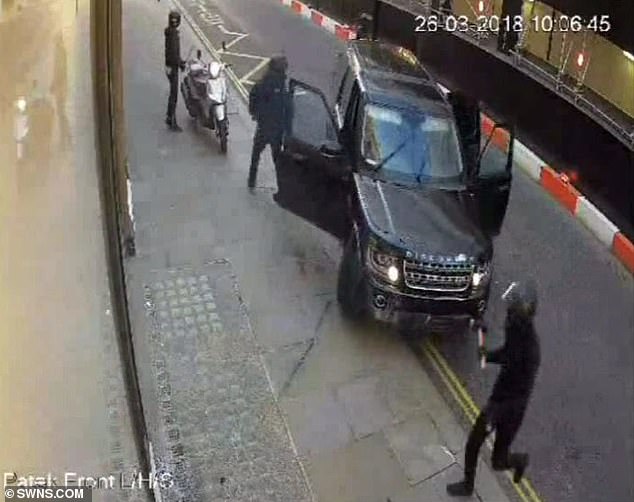 In his room a ‘zombie’ Knife, four stolen mobile phones, and two Saint Laurent handbags worth a total of £10,000 were seized.

The discovery of the handbags led officers to investigate the Saint Laurent burglary.

Mr Shaw said: ‘When the store was shut, two mopeds with four men on them, all dressed in black, arrived and smashed their way into the store.’

Footage from inside the store showed two men lifting the shutters before going inside and looting bags.

The men abandoned their clothing and crash helmets in a Clerkenwell office block undergoing refurbishment but a mobile phone was left in a pocket of one pair of trousers. 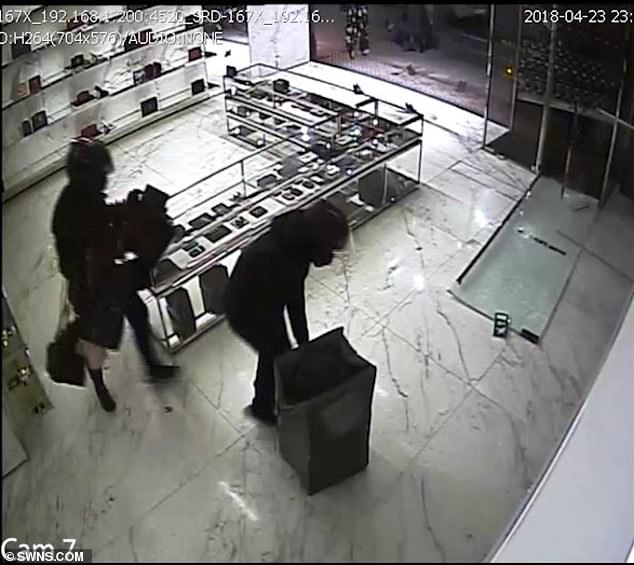 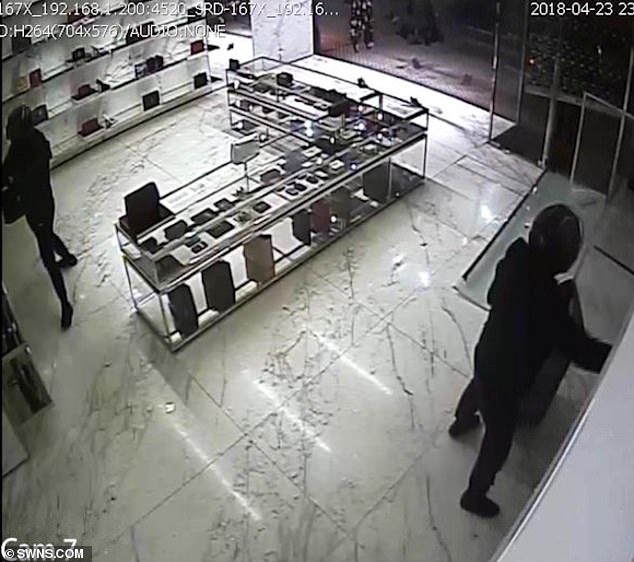 They stripped the Yves Saint Laurent store of about £85,000 of handbags

Mr Shaw said leaving the phone was a ‘major mistake’, as this was recovered and used to track down the culprits.

He was found guilty of conspiracy to commit robbery at Boodles jewellery store after a trial at Blackfriars Crown Court.

Alfie Warry, from Camden, was found guilty of conspiracy to commit aggravated burglary at Saint Laurent.

Harry Doyle, of Islington, pleaded guilty to conspiracy to commit robbery at Boodles jewellery store. He was also found guilty of grievous bodily harm in relation to the assault of Mr Dimov.

Reece Salmon, 22, of Islington, pleaded guilty to conspiracy to commit robbery relating to the Camden, Islington, Westminster, and City of London incidents.

He was accused of conspiracy to commit robbery at Boodles jewellery store, but was found not guilty by the jury.

Other members of the north London gang are still to be brought to justice.

Henry Histon, 18, of Camden, previously admitted his involvement in the Boodles and Yves Saint Laurent raids. 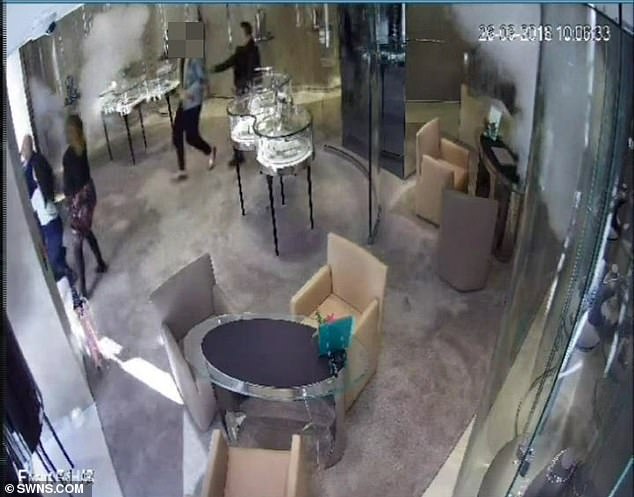 A 16-year-old, who cannot be named for legal reasons, pleaded guilty to the conspiracy to rob Boodles.

Detective Sergeant Danny Watts of Operation Vocare said: ‘These gang members were big operators in north and central London. However, we secured a number of significant convictions and sentences against them and they have been taken off the streets.

‘We are committed to taking every opportunity to divert, disrupt, detect and prosecute those involved in these moped related crimes.’

‘It is by sheer good fortune that having been set upon by four men wielding axes and swords that he did not sustain more serious injuries.

‘This has been a complex investigation, and I hope the people of London are reassured that five of those involved in this robbery are now behind bars.’

Anyone who has any information in regard to these crimes or any moped enabled crime is urged to contact local police by dialling 101.

Alternatively call Crimestoppers anonymously on 0800 555 111 or tweet @MetCC with any information.