EXCLUSIVE: ‘The plane’s going nowhere!’ Dramatic moment armed cops forced barrister and his pole-dancing lawyer wife off BA flight after furious row with cabin crew who had downgraded his children’s NANNY to economy

This is the dramatic moment when a top barrister was ordered off a British Airways flight by armed police after arguing with cabin crew when they refused to let his children’s nanny join him and his family in business class.

In the video, two police officers stand beside Charles Banner, QC, 41, as they demand that he leave BA flight 2578 which was bound for Turin.

He then warns the high-flying barrister: ‘The aircraft’s not going anywhere until we’ve finished over conversation.’

The policeman’s colleague adds: ‘We’ve got a lot to discuss…The quicker we get this done.’

Mr Banner was on the flight on February 3 from Heathrow Airport with his wife Tetyana Nesterchuk, their two children, aged one and four, and their nanny. 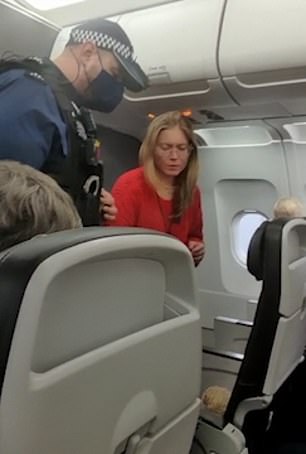 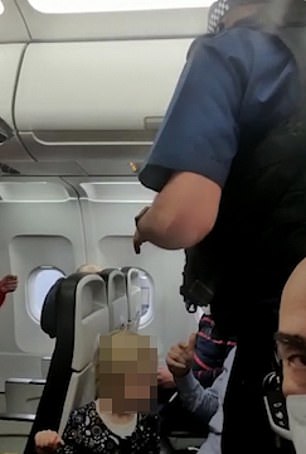 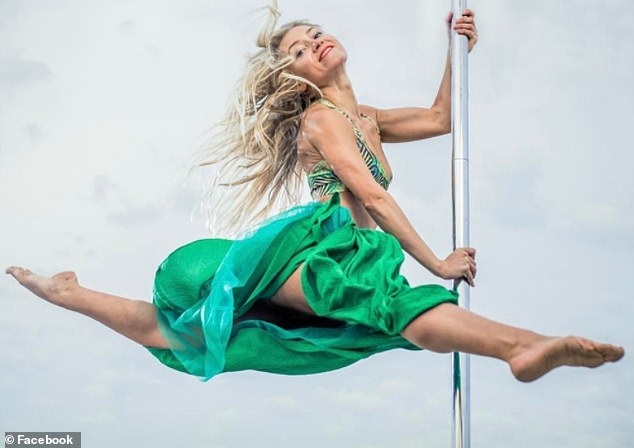 Mr Banner was on the flight on February 3 from Heathrow Airport travelling to Turin with his wife Tetyana Nesterchuk (pictured), their two children, aged one and four, and their nanny

Matters became heated after Mr Banner was informed that their nanny had only been allocated a seat in economy when he arrived at the boarding gate.

Mr Banner paid for business class tickets, but his nanny had been downgraded because BA oversold the flight.

He insisted that the nanny be allowed to join him and Tetyana in business class because they wanted to work during the two-hour flight.

Tetyana, who is of Ukrainian origin is also a leading barrister, specialising in commercial and public law but enjoys pole dancing in her spare time, posting pictures of herself performing on social media.

Mr Banner is not visible in the video, as one of the policemen is crouching over him and much of what he says is not audible due to background noise on the plane.

But as he pleads with officers, he can be heard saying that he would prefer to ‘discuss this here,’ prompting one of the officers to insist: ‘No you don’t.’

His colleague then swings his fist, thumb sticking out, indicating the plane’s front exit and reiterates: ‘Can we go outside please.’ 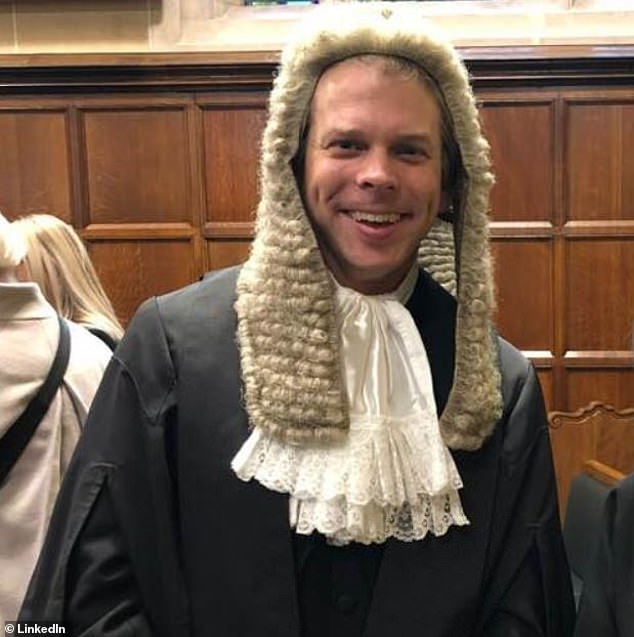 Mr Banner (pictured) paid for business class tickets, but his nanny had been downgraded because BA oversold the flight. He and his wife wanted to work so needed the nanny with them 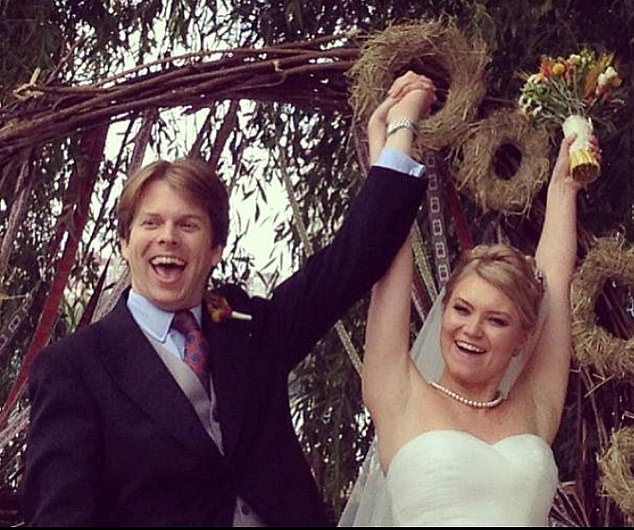 As the other police officer appears to explain the situation, which is not clearly audible he can be heard saying: ‘Put it this way, we can discuss it very, very nicely.’

Mr Banner’s response is also not clearly audible either, but he can be heard pleading: ‘This is unfair.’

As the conversation continues, one of the policemen tells him: ‘Your family…you’re not going.’

Soon after, Mr Banner and his family, accompanied by their nanny left the plane.

During the interaction between Mr Banner and the officers, a young girl, believed to be his daughter is initially sitting next to him.

But as the heated conversation continues, she moves to the row in front where she is comforted by a woman in a red jumper, believed to be Tetyana, who can be heard saying: ‘Don’t worry.’

The debate over the nanny started upon boarding but continued as the plane started moving from the stand, prompting the pilot to turn it around and insist that he would not fly until Mr Banner and his family had been removed. The flight was delayed by 90 minutes. 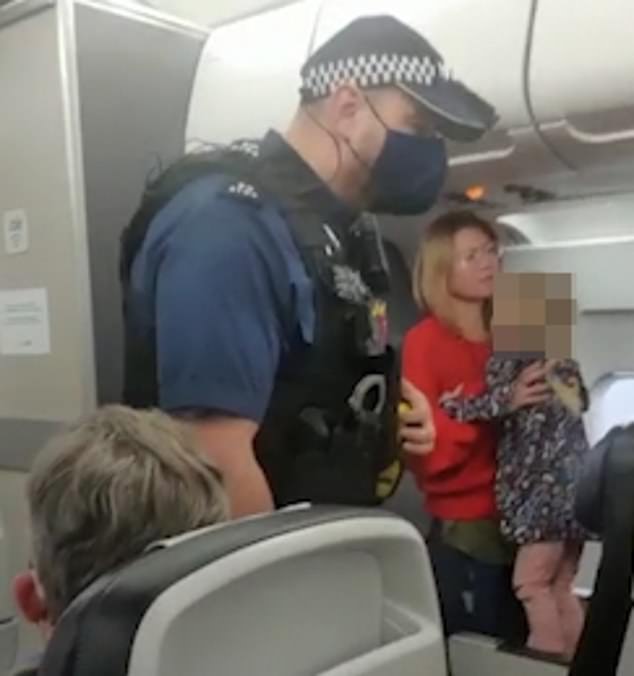 Last week, Mr Banner told MailOnline that the presence of police as he left the plane was simply standard protocol and did not indicate that he had committed any crime.

He said: ‘In accordance with standard protocol in a situation where passengers leave a plane and return landside, the police escorted our family back through immigration. They made clear that this was just standard protocol and that no offence had been alleged or committed.’

Recalling the incident, Mr Banner said: ‘If BA had told me that the nanny could not sit with us in business then we would not have travelled and could have got a later flight. But they only told us that when we got to the boarding gate.

‘I behaved perfectly but I was challenging the cabin crew because it was the right thing to do.

‘The pettiness and vindictiveness of the staff caused this. I was being very polite about the whole thing.’

He added: ‘It was a very upsetting event for all of the family and the way we were treated was appalling and in contrast to over 15 years of pleasant experiences on BA flights as a regular customer.’ 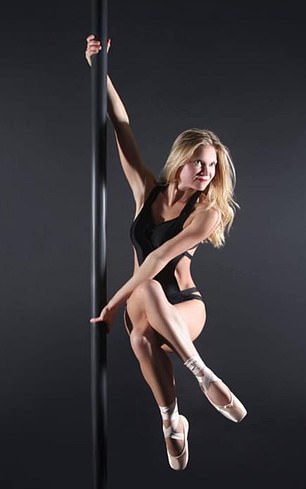 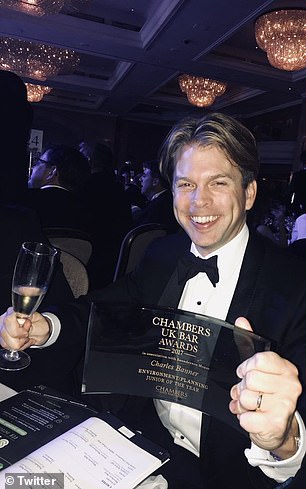 Mr Banner says that he was forced to book into a hotel because of his young children, as it was getting late. The family eventually flew to Italy with Easyjet after boarding a flight at Gatwick

Mr Banner claimed that even though there was a spare seat close to him in business class, cabin crew staff insisted that nanny could still not sit in it and help look after his children, prompting him to inform them that he had made an official complaint about their conduct while still on the plane.’

He revealed: ‘This was unsurprisingly very upsetting and frustrating for us all, as it would have been for any family in this position.

He added: ‘I indicated to the cabin crew that I had made a complaint about their behaviour to BA.

‘Rather than apologise, the cabin crew then asked the pilot not to fly either the two kids aged 4 and 1, their mother, the nanny or myself, which was a gross over-reaction to our understandable upset at how we had been treated – most likely to provide the cabin crew with cover against the complaint that I indicated I had made about their behaviour.’

After leaving the plane, Mr Banner says that he was forced to book into a hotel close to Heathrow because of his young children, as it was getting late.

‘The family then took a taxi to Gatwick Airport the following day and booked new flights to Turin with Easy Jet.

He estimates that whole incident has cost him almost £4,000 and is demanding financial compensation from BA as well as a full apology.

The initial cost of the BA business class flights to Turin was £1,250.

A spokesman for BA said: ‘We do not tolerate disruptive behaviour and the safety of our customers and crew is our top priority.’

Mr Banner specialises in planning, commercial and public procurement and is considered one of the finest legal brains in these areas.

He was appointed a QC in 2019 at the age of 38, the youngest from that year’s batch and is rated as one of Britain’s top four planning QCs.